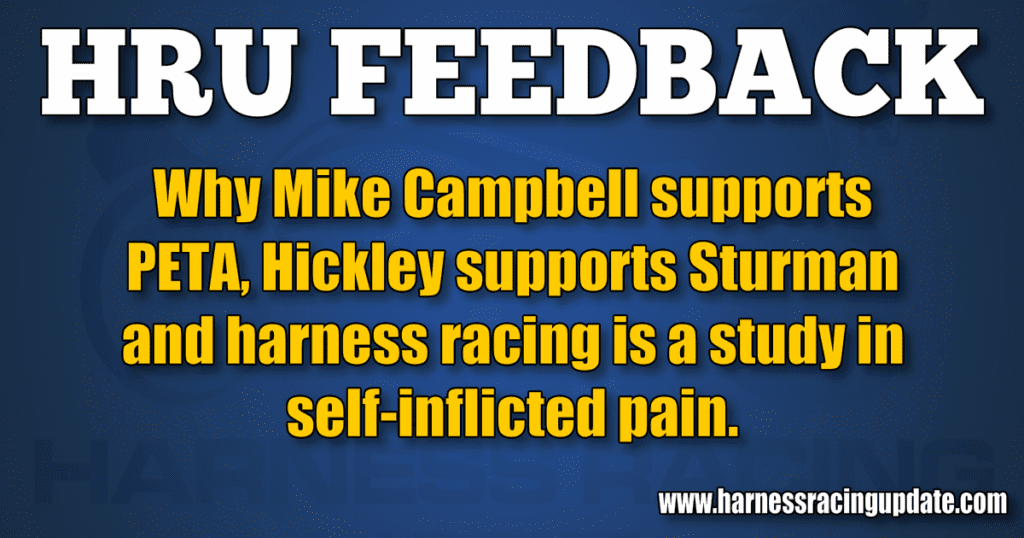 I was one of the people who would tell anyone who would listen, that PETA was just some tree-hugger organization that resorted to any means necessary to publicize its crusade and mission to fight animal abuse. I agreed with countless press releases from horsemen’s associations, state racing commissions and even the almighty USTA that they were cracking down on animal abuse and that PETA was stirring a pot that didn’t need it. Boy, was I an ignorant jackass.

On the USTA site, you can look up suspensions of trainers in the Pathway section. It seems there is a trainer by the name of Marc E St. Louis Jr, who in my opinion took the act of animal abuse and pissed all over it. I don’t know this villain, but what I do know is he shouldn’t be allowed within 1,000 miles of a racetrack or a horse. His abuse includes drugging, killing, and burning a horse to hide evidence. Reading this criminal’s suspension is reminiscent of some horror movie script but wait, it gets better. This derelict is allowed to race. Yes, as previously written, he was suspended for a few years but has since been reinstated. My question to the commission that gave this goon a current license is this: Where is the line of no return? What illegality does one have to perform that doesn’t merit reinstatement. I have been involved in horse racing for over 65 years and I can honestly state that the actions of this sub-human and the subsequent actions of the reinstating racing commission are so egregious, so deplorable and so despicable that I printed out a copy of the suspension and mailed it by certified mail to PETA. What they do with it is their own business. Hopefully, they will bring light to this criminal act and avenge the death of an innocent animal.

I just wanted to express how great I think this article is (full story here).

Perhaps it hits home to me as I spent many years on Maine Harness Racing Promotional Board where, when I expressed my opinion that we needed to get money through the windows not bring out families for free fun events, I was at best ignored.

The Board is now gone, accused at Maine Legislature of being ineffective, it had budget of $60,000 with which everything including calendars and to cover tv ads for the season. It didn’t help, but I wish I had this article back then.

A close look at harness racing’s current issue of declining bettors can be summed up with just a handful of words “ignore at your own peril”. Issues were placed squarely on harness racing’s front lawn years ago and it has chosen to ignore them. Tapping into the casino profits from slots should have been utilized as a temporary opportunity to fix problems while remaining profitable. But, harness racing in its infinite wisdom, chose to sit back and do little if anything, validating the old axiom: “to keep repeatably doing something the same way and expecting different results is the definition of insanity.” Even thoroughbred issues came to light recently with the running of the 2019 Kentucky Derby. Why did it take 30 minutes to find an interference call when both the rules and the infraction were clear? And, why didn’t the jockeys that were interfered with lodge the obvious objection immediately, the answer is both politics and profitability.

Harness racing, like baseball, has chosen to ignore the game and concentrate on politics and profits. Today’s fans and bettors are much more highly educated and expect a product that provides a level playing field to all bettors with a reasonable chance to make a couple of bucks while providing non-stop entertainment. Need a clear picture, compare the customer experience at an NBA or NFL game with that at a baseball game, now you see the issue with current harness racing and you begin to see the problem in developing new, younger betting customers which have come to expect more non-stop entertainment. Two of the largest-handle tracks have gone to providing free PP’s and handicapping discussion prior to and between races, while the majority are still stuck in 1970 playing loud rock music and running wiener dog races or shooting t-shirts into the crowd.

If we look at the sport from 50,000 feet, several tracks are prospering right now, but it is my belief their profitability is currently tied to an influx of customers formerly wagering at many of the smaller tracks. Without significant, fundamental changes the harness racing sport is on a decay curve heading towards flat in the next 5-7 years. If the track CEOs think they have a secure business model, perhaps they need to look at the track in Yonkers, NY. Initially, slots profits infused into purse money drew the best drivers, trainers and horses now the track’s hold or take-out on wagering dollars has fallen to less than the purse paid out and changes made to racing conditions has made the racing predictable and boring.

So what does a racetrack look like that would draw my wagering dollars:

1. Lower takeout rates, there is no reason other than greed that the PA tracks have a takeout rate up to twice that of a casino and other tracks are gradually raising theirs, where allowed.

2. Adopt a standard set of rules instead of “Well he only went inside of one pylon and he really didn’t mean to go off the racing surface and come back on it.”

3. Form reversal is absolutely NOT permitted.

4. Every racing program should display up to date fines and suspensions for each driver and horse and it should be displayed on each race’s stats.

5. Wagering and odds should be handled in a way that does NOT allow advantages to the last-minute, super large bettors. Frankly, this is one area the tracks have chosen to look the other way on and I’m tired of wagering on a horse at 7-5 at just before the off only to find after the first turn some 30 seconds later that a whale bettor has driven the odds down to 3-5. You, I and the tracks know that it is a simple programming task of XOXO’s to disallow super bets after a certain time in the betting cycle. This respects all customers equally.

6. It’s obvious that in the big money races that many of the better horses are not extended fully in the previous week’s elimination races. While this understandable, it is not fair to the betting public, thus elimination races should be deemed/carded NON-BETTING.

7. As the horse are preparing to get behind the gate, I’m bothered by the drivers’ conversations, the optics are bad. Drivers making holes to let other drivers stuck on the outside into is unacceptable to me.