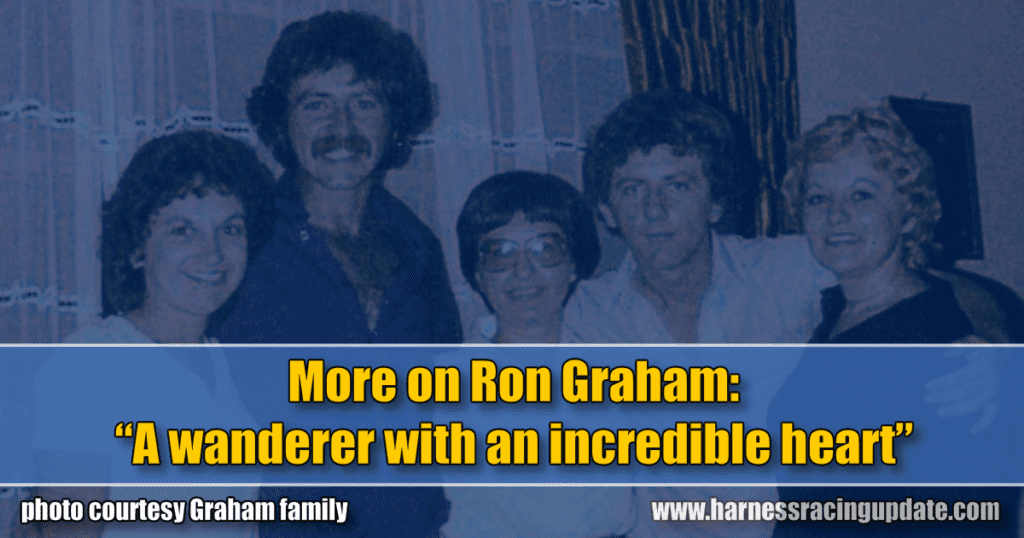 “A wanderer with an incredible heart”

More is revealed about the life of caretaker Ron Graham who died on the streets of Toronto.

In the weeks since Harness Racing Update published the article “The tragic and mysterious death of a harness horseman” (full story here), it’s become clear that Ron Graham waged a private battle with homelessness, but was never forgotten by his extended family and those who knew him in the harness racing community. The retired caretaker passed away in Toronto last October at age 62. He had been sleeping rough because he could not find safe, affordable housing.

Ron – better known as “Ronnie” — was the son of George “Eagle” Graham, a trainer/driver at the defunct Tartan Downs/Cape Breton Sports Centre track in Sydney, NS. Ron’s niece Aimee Graham lives in Frenchvale, Cape Breton. The daughter of late horseman Joe “Bumps” Graham, Aimee said she knew her uncle was living on the streets of Toronto, but was unaware exactly how serious his situation had become. “He never wanted to be tied down. I kept waiting for a call that never came. Now I know why.”

According to family members and trainers for whom Ron Graham once worked, the horseman left Cape Breton at an early age and never looked back. Trainer Philip Coole said Graham was “a little talkative, but a good guy” who worked for him in the winter and “toured with the carnival in the summer.” Coole knew a few details about Ron’s family, including that his brother “Bumps” had passed away in the 1990s, and another brother, Gordie, was training horses in California. Over the years Coole, like others who knew Ron, lost track of him: “Last I heard, he moved down east to Sydney.”

But offers of housing back in Cape Breton didn’t dissuade Ron from self-imposed isolation in Ontario. “He had family who loved him,” said his niece Aimee. “The door was always open to come home.”

She recalled “Uncle Ronnie” as a free spirit who enjoyed taking care of standardbreds. “I was born in ’81, and my father (Joe) was in the races at Tartan Downs. At that point, Uncle Ronnie was already travelling… He spent time at Tartan Downs in his younger years.” Then Ron, like many young Maritime horsemen, wanted to be where the action was. He left Sydney, NS for Montreal’s Blue Bonnets.

“At first, (Ron) had come up from Cape Breton and he was looking for work, so I got him a job with someone, but they were getting low on horses,” said the retired Quebec horseman. “So he would come over and help me with my horses, because I had a couple of people but I always had a few extra horses on odd days. He was a very, very good worker — he loved the horses.”

Unlike his father and brothers, Ron Graham did not pursue a career as a professional trainer or driver. It was not for lack of ability with the horses, said Murphy. “I don’t think he really wanted to be (a full-time trainer/driver). He just liked looking after horses, you know — caring for them. I had a big amount and I trained and drove horses at the time, and he was very well-liked at the racetrack, a very good person. Always in a good mood, up-tempo.”

Graham had another gig he enjoyed when he wasn’t looking after racehorses, said his former Blue Bonnets-based employer. “He toured with the carnival, also. He would be at a french fry stand, selling drinks. He spoke of the french fries, of how he had the record for selling the most in a day.”

Murphy said that Graham could have stayed in Montreal, working as a caretaker, but “he thought he could do better if he went up to Toronto.” So Ron was once again going down the road, knowing there would be opportunities to work with standardbreds at Greenwood or Mohawk. “There’s always a job for a caretaker,” said Murphy, who learned of Ron’s passing when he recognized his photo in HRU. “He was a very, very likable guy. It was a sad thing to read about him.”

Lauro Monteiro, executive director at Haven Toronto, noted that the recent housing crunch in Ontario had made life precarious for low-wage workers, including career caretakers like Ron. “When I was younger, they could get jobs here. Toronto was the repository for opportunity, and it’s not that anymore,” said the administrator at Canada’s only drop-in centre for older homeless men. “The economy here now is a knowledge economy. If you’re not an I.T. (information technology) person, what are you coming to Toronto for?”

While not a follower of harness racing, Monteiro was a frequent Sunday visitor to Greenwood Raceway as a child. He remembered the grooms’ quarters that used to exist at the track, providing housing to workers who would otherwise be hard-pressed to find anything nearby. “When I was a kid, nobody cared if you walked through the stables,” he said. “On the south side of the track, closer to Lakeshore Boulevard, they (grooms’ residences) were there. The track was on the north side.”

During his time at Haven, Graham mentioned returning to work as a caretaker. “Ron asked if I could get him a job (at Woodbine). I told him that I knew someone that was hiring a groom, but he had to go the next day,” said Haven counsellor Wayne Bright, via email. “He did not go.” Bright did not disclose the name of the trainer involved, nor Graham’s reasons for not making it to Woodbine. Given the struggles Ron endured on the street, it’s possible the rigorous job of being hotwalker or caretaker to thoroughbreds suddenly seemed too daunting for the experienced horseman. Anyone who might consider him lazy is invited to commute from the downtown to Woodbine using public transit. Bearing in mind the long, early and irregular hours of a caretaker’s schedule, it’s just not feasible.

Years ago, Ron expressed to family members that he eventually wished to have his cremated remains scattered at a racetrack. Some versions said it was Mohawk Racetrack; others said Tartan Downs. The details remained unknown after the always-private horseman slipped away during the night of Oct. 27, 2018, sleeping outside near Toronto’s Osgoode Hall. He was buried at Duffin Meadows in Pickering, ON; his niece, Michelle DeWolfe, said family members were writing his obituary. Saddened to learn of her uncle’s passing, she was comforted in knowing he found respite, playing cards and sharing stories of his racing days, at Haven Toronto. Because Ron Graham was, to all who knew him, “a wanderer with an incredible heart, working for the carnival and with horses.”