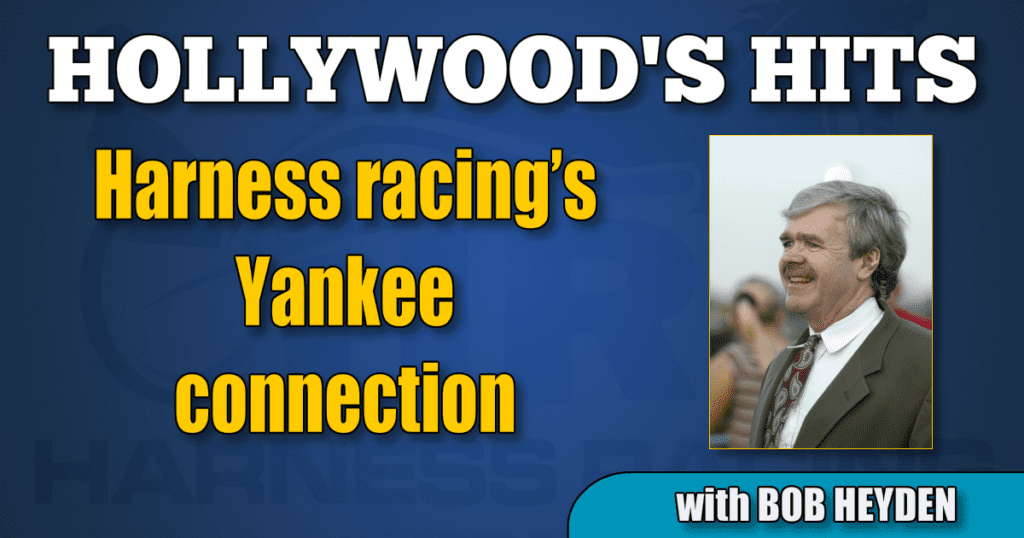 The sports of baseball and harness racing has long been intertwined, with stars in each patronizing the other sport. But there seems to be an even deeper connection with standardbred racing and the Yankees, as in New York Yankees. Let’s take a look at the bond between the two.

In 1944, the filly Yankee Maid won the Hambletonian, but the baseball Yankees were just 83-71 finishing third, six games out of first place. (all sports suffered in attendance during the Depression and WWII. From 1931-1945-the Yankees did not draw one million in any season! But, when the war ended, the 1946 season saw 2.2 million plus rush thru the turnstiles at Yankee Stadium) 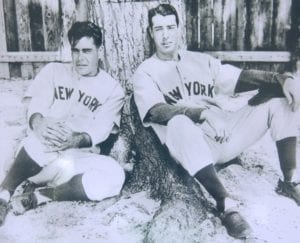 In 1968, Master Yankee got the last check (5th money) in the Hambletonian while Mickey Mantle drew his final checks from the Yankees in his last — and 18th — season with the team.

In 1970, Fresh Yankee, bred by Charlie Keller and sold for $900 as a yearling, was named Horse of the Year. She defeated Nevele Pride in his next to last career start the year prior in his third straight HOY season. On the baseball side, a very ‘fresh’ Yankee named Thurman Munson was named “Rookie Of The Year” hitting .302 and paving the way for a stellar decade with the Bronx Bombers, which included an MVP trophy in 1976.

In 1973, Imperial Yankee raced in the Hambletonian but didn’t get any money. The Yankee baseball team had a similar fate going 80-82 and missing the playoffs.

In 1975, Yankee Bambino missed by a nose to Bonefish in the Hambletonian. The original “Yankee Bambino” — Babe Ruth — led the league in home runs 12 times, hit three homers in a single World Series game TWICE (1926, 1928), and retired with 714 homers, in addition to 1,221 innings pitched over his incomparable career.

In 1977, No No Yankee wins the first ever Woodrow Wilson and remains undefeated. NO NO Yankee —prior to Reggie Jackson that is — had ever hit a World Series home run on four consecutive swings, (three in Game 6) against four different pitchers as the Yankees downed the LA Dodges four games to two.

In 1980, the baseball Yanks went 103-59 but lost to the Royals and failed to advance to the World Series. It was Dick Howser’s one and only season at the helm. The harness racing side saw Smokin Yankee nail down 2YOCT honors, But he too was something of a one-hit wonder-failing to do any serious damage at three (He was fifth as the favorite in the 1981 Hambletonian first heat, then eighth in the next).

In 1981, Defiant Yankee won the Dexter Cup valued at over $230G. On the baseball side, a soon-to-be “Defiant Yankee” — Dave Winfield — begins his 10-year run with the Yankees and appears in the World Series for the one and only time with the Yanks that year, necessitating the nickname from owner George Steinbrenner, “Mr. May.”

In 1983, T V Yankee was second and sixth in the Hambletonian as Tommy Haughton tried to do what had never been done — win the Hambletonian back-to-back while in his 20s. He captured it the previous year with Speed Bowl at age 25. Don Mattingly, the “T V YANKEE” of the 1980s got his baseball career going in 1983 hitting .286. He would lead the league in hitting the following year (1984) and be MVP the year after that (1985).

In 1994, Federal Yankee from the first crop of Valley Victory, was fifth, giving Valley Victory three of the five checks in his first try at it (Victory Dream first, Smasher fourth). The Yankees were heading to the post-season that year before a strike in August halted and discontinued the season, canceling the World Series for the only time. It was also the year Yankee Cashmere won the Breeders Crown. The baseball Yankees were stocking up with some serious talent that was on the verge of breakthrough come 1994. Derek Jeter, Jorge Posada, Andy Pettite and Mariano Rivera were all about to enter the big time and change the course of the sport for the next decade.

In 1998, one of the greatest ever Hambletonian winners, Muscles Yankee, dominated and gave John Campbell his record fifth driving win in the classic. No wonder Campbell was throwing out the first ball at Yankee Stadium that August — the greatest driver of our time, one of the greatest trotters and possibly the greatest ever team in baseball history. The 1998 Yankees went 114-48 during the regular season, 11-2 in the playoffs to become the first team to ever win 125 games in a single season. Bernie Williams led the league in batting at .339. They swept the San Diego Padres in the World Series.

In 2000, Yankee Paco won the Hambletonian the same year of the Subway Series —Yankees / Mets, won by the Bronx Bombers 4 games to 1.

In 2003, Yankee Cruiser (sire of Sweet Lou) won the North America Cup. Speaking of Sweet Lou, he was named for the personable Lou Piniella, who batted .291 for his career, was known for his coming to the plate and being serenaded with “LOUUUUU”, and who had a period of six years — 1976-1981 — where he had an incredible 145 at bats in the post season. Most of his time was with the Yankees, although he started his career with the Orioles in 1964, which made him both a teammate of Brooks Robinson and Don Mattingly.

In 2004, the Yankees had a 3-0 lead over the Red Sox only to see it disappear and then to watch the Red Sox go on and win the World Series. Any guesses on the name of the 3YOCT who won the Breeders Crown that year? YANKEE SLIDE at 39-1 with Brain Sears. (N Y Yank won the Peter Haughton also).

In 2005, Strong Yankee won the Yonkers Trot, a three-heat Kentucky Futurity and the Breeders Crown. The baseball Yankees were not able to make the World Series. That would still be four years off.

In 2006, Yankee Skyscaper won the $900,000 Metro. It was still prime time on the baseball side, as Alex Rodriguez has a 54 HR 156 RBI season — and Jeter-Rivera-Williams et all were once again knocking on the door for it all.

In 2007, Blue York Yank won the Peter Haughton. On the baseball side, the days were winding down for the old Yankee Stadium

In, 2012 APERFECTYANKEE wins the Peter Haughton (Jim Oscarsson), and then came back as a sophomore and earned good money in the Hambletonian — third and then fourth in the final. On that baseball team was the only player to ever be unanimously voted into the Hall Of Fame, Mariano Rivera (0.70 post season ERA), and possibly the next unanimous Hall Of Famer as well — Derek Jeter — whose name comes up this winter for the Hall Of Fame vote. Two Perfect Yankees if there ever was a pair? Stay tuned!

P.S. Who was the only Major League Baseball player (well over 19,000 have played) whose last name started with Y A N K? George Yankowsky.