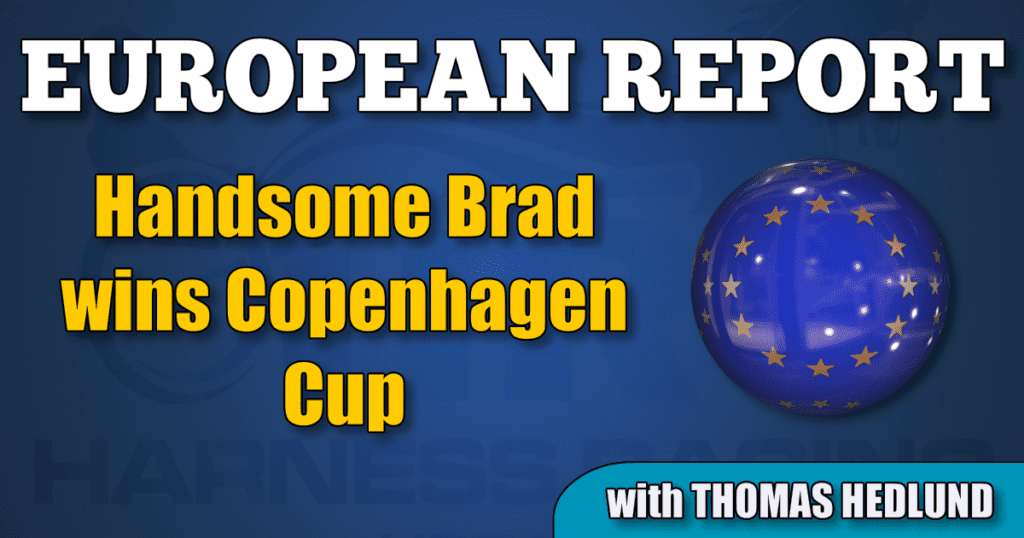 After a positive runner-up performance, second to Propulsion, in Olympiatravet a few weeks ago, 6-year-old Handsome Brad was ready for a group 1-victory in Scandinavia.

The $113,000 Copenhagen Cup was held at Charlottenlund racetrack in Denmark last Sunday and Ulf Stenströmer-trained Handsome Brad could easily keep first choice Cyber Lane on the outside when the car left the field in the 1.3 miles long race.

When in front, Handsome Brad, driven by Carl Johan Jepson, controlled the race every meter and via a quick last quarter of a mile, the son of Brad de Veluwe held his opponents in safe distance all the way to the wire.

Stenströmer has a great ability to make trotters develop after the tough years as 3- and 4-year-olds and he has earlier presented top trotters as Noras Bean and Your Highness in the elite class.

Handsome Brad won in a mile rate of 1:54.4 over 1.3 miles and Cyber Lane held strongly to second place, ahead of Generaal Bianco.

The entourage around winner Handsome Brad got the question regarding an entry in Elitloppet, but Stenströmer has communicated that they will aim for other objectives later this summer.

At Solvalla on Tuesday night, Nadal Broline made an impressive comeback for his new trainer Björn Goop.

Nine-year-old Nadal Broline (Yankee Glide) had been successful in Reijo Liljendahl’s stable, but since mid-February, Goop has been the new trainer. In the $42,000 Meadow Roads race, Nadal Broline won in season best time on a 5/8 mile track in Europe. From second over, with Perfect Spirit in the lead, Nadal Broline had to leave three wide before the last turn and the battle in the home stretch was between him and Milliondollarrhyme where Nadal Broline showed great courage when he beat the freshman Milliondollarrhyme just before the wire in 1:51.1. High grades are given to both him and the runner up, who never had tried this kind of opponents earlier in his career.

But the Elitloppet is, probably, out of the question for Nadal Broline, whom Goop said was too old and would be better suited for other targets later on this season.

15 in a row for Aubrion du Gers

Jean-Michel Bazire has accepted his invitation to the Elitlopp with Aubrion du Gers (Memphis du Rib) whom is one of the top four choices to win at Solvalla on Sunday, May 26.

In the $125,000 Prix de Ducs de Normandie in Caen, France, Bazire sent his 9-year-old gelding to front at an early stage and the duo got Bold Eagle, driven by Björn Goop behind them.

Bazire made sure that he never gave free space for Bold Eagle to use and Aubrion du Gers sprinted to his 15th consecutive win in a mile rate of 1:56.3 over 1.5 miles.

The gelding’s next objective is the Elitloppet at Solvalla.

Finlandia-ajo runner up Next Direction, owned in Finland, and Swedish-owned Disco Volante are both ready for start at Solvalla next week.

Twelve horses are set for Elitloppet at this point and on Saturday, a ticket is at stake when Gävle racetrack stages the $103,000 Prins Daniels lopp over a mile. Title defender Ringostarr Treb is the probable first choice, but trainer Jerry Riordan has said that he will not race Ringostarr Treb at Solvalla if he wins in Gävle.

Weingartner (Donato Hanover), who won Peter Haughton Memorial for trainer Jimmy Takter (brother Johnny drove at that time) in 2011, died in an accident at Stuteri Shadow in Denmark this week, according to Trav-og Galoppnytt in Norway.

Weingartner has served mares in Sweden during five seasons before he moved to Denmark last year.