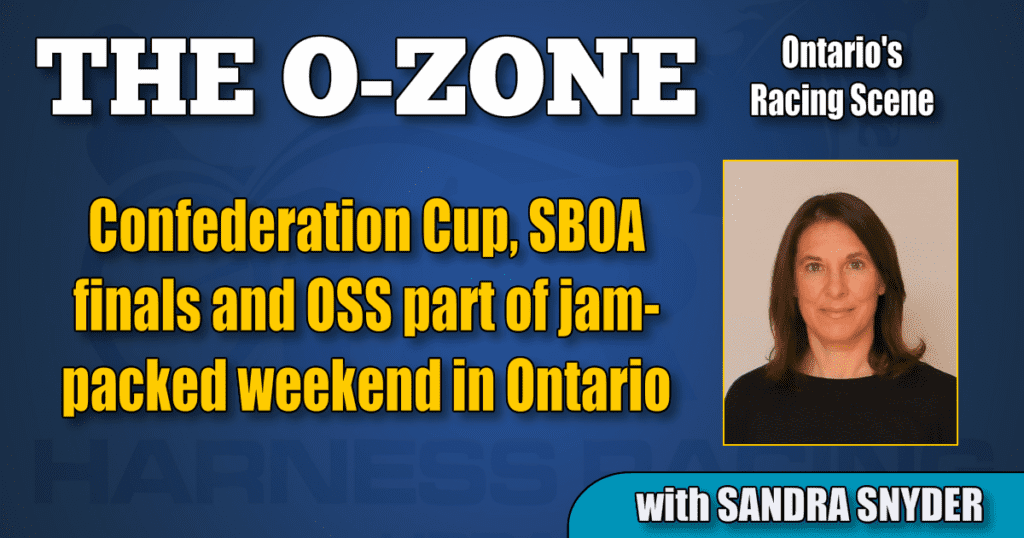 Ontario harness racing fans got their first taste of stakes action last weekend with eliminations for the Standardbred Breeders of Ontario Association (SBOA) Stakes and the Confederation Cup and the fun continues this weekend with the finals for both events.

The Ontario Sired fillies will kick things off on Saturday night at Woodbine Mohawk Park in the SBOA finals and Hall of Fame trainer Bob McIntosh has not one, but two shots at the $165,290 pacing filly prize with Sunny Dee (Post 2) and Thats Incredible (Post 3).

Both fillies won their eliminations last weekend, with favourite Sunny Dee controlling the tempo on her way to a 1:52.3 score and Thats Incredible overcoming a brief interference break to post a 1:53 victory. Girls Got Rhythm sprinted home to a 1:52.3 victory in the other elimination and will start from Post 4.

The elimination win was Sunny Dee’s sixth straight, a statistic that does not surprise McIntosh, who has been impressed by the Sunshine Beach daughter since her earliest lessons.

“I was really high on her last year as a 2-year-old. She was training down beautifully, but she had a habit of kicking the stall walls and damned if she didn’t fracture a coffin bone in her left hind. We sent her down to Rood and Riddle to Dr. Larry Bramlage and he said she’ll be fine next year, but that cost us the year unfortunately,” McIntosh said, adding that the filly currently resides in a well-padded stall. “I was high on her last year and she came back and was even better this year and she’s just never really given me any ulcerous days.

“Of course, she’s out of that great mare West Of L A too, super mare, hopefully someday she’ll be a Hall of Fame broodmare because she’s got two millionaires already, looks like she’s on her way to her third maybe.” Sunny Dee’s half-siblings are Somewhere In L A and L A Delight. “But other than that, you feel like you’re going a quarter in 30 seconds or 34 seconds and she’s going in :28, her length of her stride is just incredible. There’s nothing I can say bad about her.”

Trevor Henry drove both Sunny Dee and Thats Incredible to their elimination victories and opted for Sunny Dee in the final. Paul MacDonell, who piloted Thats Incredible in her first two sophomore starts, will return to the Bettors Delight daughter’s race bike.

In the $164,290 SBOA Trotting Filly final, elimination winners Haveoneforme and Bright Eyes M will start from Posts 2 and 3, respectively. The trotting filly final goes postward as Race 6 on the 6:45 pm card, with the pacing fillies squaring off in Race 8.

While McIntosh does not have a starter in the Confederation Cup final at Flamboro Downs on Sunday, he will be heading to the Dundas, ON oval with four Ontario Sires Stakes (OSS) competitors for the provincial program’s season opener. Three-year-old trotting geldings Judge Ken (Post 2, Race 1) and A Royal Line (Post 5, Race 4) will compete in Gold Series action while sophomore pacing geldings Lucky Levis (Post 4, Race 7) and Head To The Beach (Post 1, Race 8) will battle in the Grassroots opener. Trevor Henry will be in the race bike behind all four youngsters.

“All of these horses that are going to Flamboro are good on a half, or else I wouldn’t have put them in, that was a factor,” said McIntosh.

After capturing their eliminations, Ron Burke trainees Dorsoduro Hanover and Done Well will be battling for the Confederation Cup title from Posts 1 and 5, respectively. Matt Kakaley will be back in the race bike behind Dorsoduro Hanover, who was a 1:53.4 winner over a sloppy Flamboro oval last Sunday, and Dexter Dunn will be back aboard Done Well, who impressed Flamboro fans with a 1:51.4 clocking on the front end.

Last year’s OSS Gold and Grassroots champions Jimmy Freight and Pretty Handsome both advanced to the final and will start side-by-side from Posts 3 and 4.

“Jimmy Freight got us qualified for the Confederation Cup final last Sunday with a nice effort (fourth) from the eight-hole,” said driver Louis-Philippe Roy, who steers the pacer for trainer Richard Moreau and owner Adriano Sorella. “I like his chances with the draw; Jimmy never disappointed me.”

Pretty Handsome’s trainer Andrew McCabe said he and owner Robert Schlegel of Glenview Livestock Ltd. are simply delighted the Mach Three son earned a berth in the final. “We feel quite elated to have made the final,” said McCabe, who will hand the lines to regular reinsman Jonathan Drury on Sunday. “It’s definitely exciting to race against some of North America’s best 4-year-olds.”

If the weather is a bit more cooperative this week, the nine finalists, who also include American History (Post 4), The Downtown Bus (Post 6), Rockin Speed (Post 7), This Is The Plan (Post 9) and Ghost Dance (Post 9), could be taking aim on the Flamboro Downs track record, set by Somebeachsomewhere in the 2008 Cup final. Post time for Sunday’s program is 6:55 pm.

Also getting underway next week is the City of London Series at The Raceway at Western Fair District. Eliminations for the pacing divisions are Wednesday, May 22 and the trotting eliminations go postward Friday, May 24. The finals for all four events will be part of the Camluck Classic undercard at the London, ON oval on Friday, May 31.

“The City Of London is an important series for us and a staple of our closing night program at The Raceway,” said director of racing Greg Blanchard of the series, which is for Ontario Sired horses that were non-winners of $10,000 lifetime as of Feb. 28. “These are horses who, for one reason or another, have taken a little bit longer to find their game, but the finals generally always end up being competitive affairs.

“We are happy to have been able to maintain this series as we feel it’s important to horsepeople who rely on these types of series to properly bring along younger horses who just needed that extra time to mature.”

A few additional horses are taking advantage of the late blooming opportunity this year as nominations for the series were up by 51 over 2018 totals. The most notable increase came in the pacing categories, with 28 additional horses and geldings and 17 more fillies and mares nominated.

Dresden Raceway also kicks off its season next week, raising the curtain on its 11-day meet Sunday, May 26. Among the highlights of the half-mile oval’s summer schedule is the annual Canada Day program on July 1, featuring an OSS Grassroots event for the 3-year-old trotting fillies and the Mark Austin Pacing Series Final. Post time for each of the Dresden, ON track’s Sunday afternoon matinees is 1:30 pm.