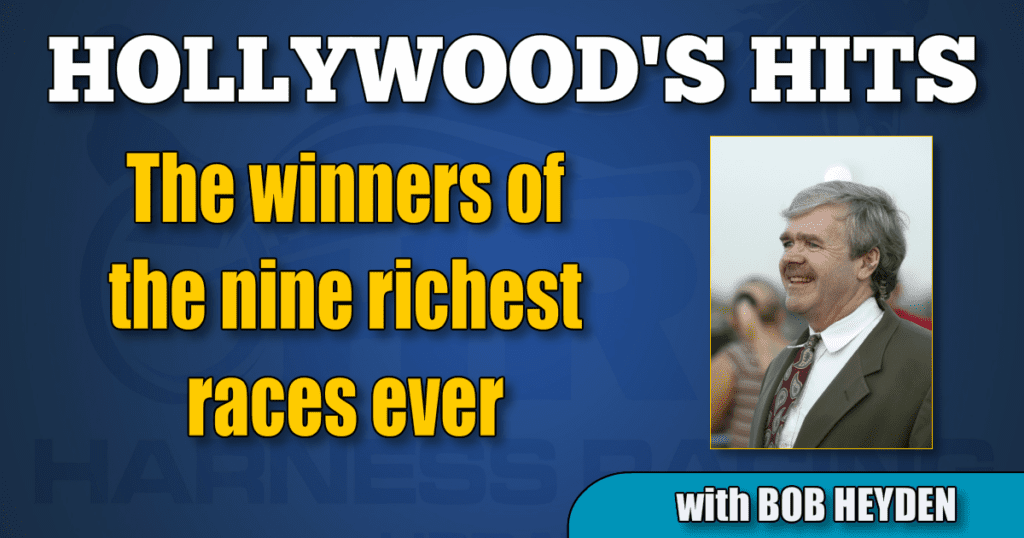 The winners of the nine richest races ever

3. Fortune Teller — $1,957,500 Woodrow Wilson in 1982. Eldon Harner drove and trained the winner of the third richest race ever held. And he did it with a three-deep move to the top at the half.

4. McKinzie Almahurst — $1,760,000 Woodrow Wilson in 198. Billy Haughton’s richest ever driving victory was a scant nose over Lon Todd Hanover. Billy trained Nihilator so his name is the only conditioner whose name appears twice. This race might have been known more for who did not win — No Nukes — who caused a pair of recalls, was a non-betting starter-lagged well off the gate at the start and mounted a furious charge to put him in contention at the 3/4s only to fade late. He was soon syndicated for $5 million — one of the best bargains of the 1980s.

5. Carls Bird — $1,700,000 Woodrow Wilson in 1983. The second richest race ever decided by a nose. Carl Allen drove and trained the better than 30-1 shot who edged out Trutone Lobell on the wire. The latter raced for Cat Manzi and Jeff Lohmeyer. It would be 21 years until Catman won his first $1 million race — the 2004 North America Cup.

9. Redskin — $1,513,500 Governor’s Cup in 1986. Bill O’Donnell becomes the only driver to appear on this list twice, having driven the ninth richest and the richest race winner of all time. Note that 1986 became the only year where there were two races valued at better than $1.5 million. (Other things that happened in 1986 were: Andy McCarthy was born March 31; Peace Corps was foaled — bred by Stanley Dancer and raced out of the Haughton barn, she’d become the only 4-time Breeders Crown winner; Valley Victory was born; Ulf Thoresen won the Hambletonian with Nuclear Kosmos; John Campbell won the first of his eight Messengers with Amity Chef — the only driver to win that many of any single Triple Crown event).