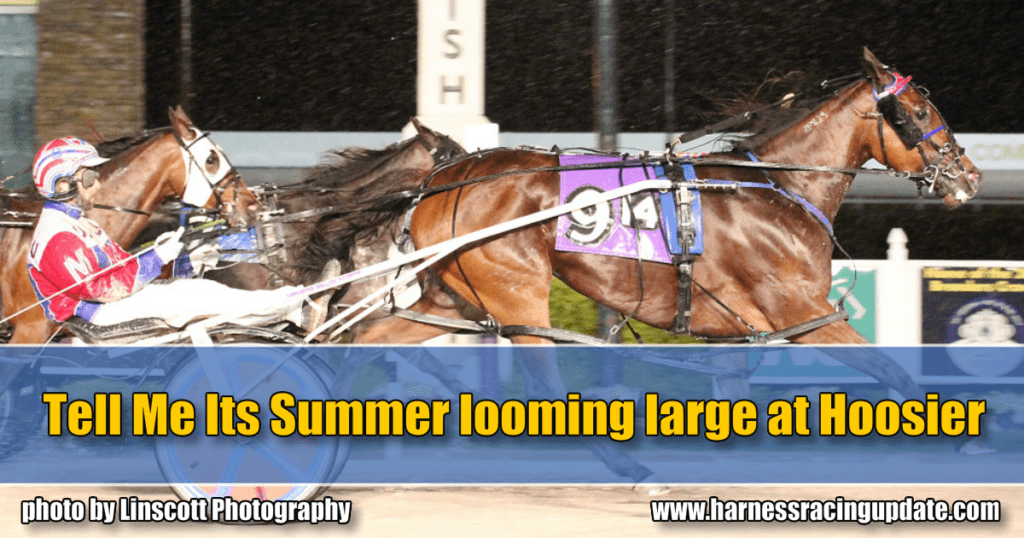 Undersized sophomore pacing filly Tell Me Its Summer is defying expectations with a perfect five-for-five record this year at Harrah’s Hoosier Park for Jeff and Maria King.

Maria King and her husband, Jeff, did not have lofty expectations this spring for sophomore pacing filly Tell Me Its Summer. However, the undersized lass from the first crop of Tellitlikeitis has shown just how much she enjoys racing at Harrah’s Hoosier Park. Campaigned by LeWayne Miller for the Kings’ Victory Hill Farm, the homebred has reeled off five wins in five starts in 2019, her latest a three-quarter length victory in the Go On BB series.

When Victory Hill acquired Donna Summer, dam of Tell Me Its Summer, in late 2009, she was a 100-per cent producer with five of racing age and a pair of $100,000 winners, including one in 1:52. One of those six-figure earners, Allamerican Summer, has since produced O’Brien Award winner Jimmy Freight. On paper, the purchase appeared to be a good investment, but the foals that followed did not generate the commercial appeal the Kings had hoped. Sold in foal to Lislea, the filly that dropped, Summertime Lea, only brought $2,600 at the 2011 Indiana Premier sale.

Summertime Lea went on to win 19 races, take a mark of 1:50.4f as a four year old, and retire with $715,804 in earnings. Donna Summer was bred to Always A Virgin in 2010, but her first Indiana-sired foal died. By the time Summertime Rock, a Rockin Image filly, made it to the sale ring, the success of Summertime Lea helped to yield a $35,000 bid. The next fall, Tough Mudder, an Always A Virgin gelding, would be the last of the Life Sign mare’s foals to sell at auction. A smaller horse like Summertime Lea, he brought $4,200, and has since earned nearly $250,000, with 15 trips to the winner’s circle and a sophomore mark of 1:50.4s.

“It just doesn’t work to sell small yearlings, and out of an older mare too,” King said. “They weren’t anything anyone was excited about buying. Buyers are convinced that an old mare can’t have good foals.”

The dam produced two more foals, with both fillies also on the small side, so King kept them out of the Victory Hill consignment and decided not to give either away at auction. Easy Rocker, a Rockin Image foal of 2015, did not make it to the races. Last season, Tell Me Its Summer made one start at Hoosier Park, but was shelved soon after due to soreness.

“She was sore last year and we turned her out,” said King. “She had a good attitude. She loved to go; she loves to race. She always gave 100 per cent training. It just didn’t work out. We didn’t have any idea if she had a lot of talent.”

With limited opportunities last season, Tell Me Its Summer was brought back this winter, but hopes were not particularly high for the filly. She had shown potential, but it remained to be seen if soreness once again would become a factor. Prior to qualifying, the filly was sent to Miller to race out of his barn.

“They just said that she acts like she wants to be a racehorse,” Miller said. “They didn’t know if she was going to be a sires stakes horse, but they thought she would make a good racehorse.”

In her March qualifier, Tell Me Its Summer crossed the wire first with Miller in the bike, stopping the clock in 1:59.1. Dropped into an overnight race March 29, the filly earned her first win, a 1:56.1 score as fourth choice in the event. A week later, she captured a division of the Rosie Harness Memorial in 1:55.1, kicking home in :26.3.

“She qualified alright, and her first start she raced well,” the trainer said. “I think the second start is when I said, ‘Wow, she can possibly be a sires stakes horse.’”

Tell Me Its Summer continued to step forward in the Miss Windfall series. Drawing post eight as the favorite, the filly took control in the stretch and finished three and one-half lengths in front, tripping the timer in 1:53.2. Tell Me Its Summer was held out of the second leg of the Miss Windfall out of concerns that soreness might arise, but she returned April 25 for the $15,000 final. There, Miller fired from post eight to get a pocket trip behind favored Glorious Nite. In the stretch, the sophomore powered through the slop with a :26.3 last quarter, winning by a neck in 1:52.2.

“You tip her off someone’s back and she wants to go by them. You don’t have to ask much of her. She’s always wanted to go forward, there’s no doubt about it,” said Miller. “A couple of starts ago when she paced in 1:52.2 that was on a rainy night, sloppy, and I told myself after the mile, on a good night that was a mile in 1:51 or better. I think that’s where she can go.”

Beginning the year with no expectations, the connections now have a bona fide Indiana Sires Stakes contender. In her most recent effort, the $9,000 opening leg of the Go On BB, Tell Me Its Summer again showed her desire to compete. Drawing the outside post, the filly came from off the pace over a sloppy track, out most of the mile before collecting a 1:53.4 score May 9 at Hoosier Park. The filly will again skip a round before returning for the final.

In only a handful of starts, Donna Summer’s 13th and final foal has become the racehorse the Kings never expected. She has banked $25,250 this spring, with potentially more to follow. Miller is excited to have Tell Me Its Summer in the barn, impressed even more each time out.

“She seems to get stronger every start. Her last start is probably the one that I’ve been most impressed,” Miller said. “The way she did it, she was parked the whole mile and beat some pretty nice fillies.”

Added King, “We’ll just see how it all goes. She’s been fun, and it has been a nice surprise. We’ve enjoyed watching her.”