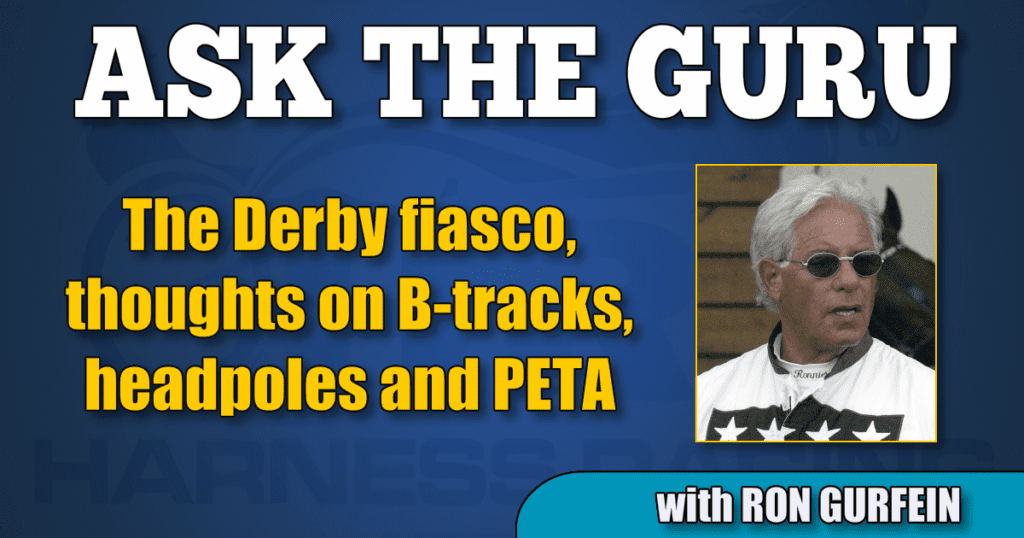 Tidbits:This is more than tidbits. What a fiasco on the first Saturday in May. The Kentucky Derby, the day of days, that for me turned quickly into a nightmare.

My original selection Omaha Beach, who I thought was much the best, was scratched.

My second selection, that became my choice, Game Winner, got his second horrific ride in 30 days. It wasn’t bad enough his jockey Joel Rosario was three and four deep in the six-horse Santa Anita Derby, but on the speed-favoring Churchill Downs course was 19th going into the first turn. Realizing his dilemma he launched his bid for the top from 19th, traveling six, seven and even got an eight-wide call. You cannot win the Kentucky Derby from 19th at the quarter unless you are Mine That Bird ridden by Coo Coo Calvin Borel, and pass 19 colts basically on the inside where he was risking severe bodily harm by getting knocked over the hubrail. To say that Game Winner went an amazing race is an understatement. After going a mile and a half he still got the last check and was within a few lengths of the eventual winner.

Which brings me to another mess. Why did the stewards treat the Derby like a $5,000 claimer. If I was in the booth for a cheap race and the DQ infraction occurred I may think twice about taking Maximum Security down, but not in The Greatest Race in The World. The horse was by far the best and there was no INTENT on the part of Luis Saez to do anything wrong. The colt shied from something. Did he cause interference? Yes, however in no way did it change the outcome of the race as the winner was more than evident at the eighth pole. I have witnessed far more serious infractions in the Derby in prior years that went totally unpunished. Too me it’s like the refs at the Super Bowl, the NBA finals or the NCAA final four, “LET THEM PLAY,” don’t ruin a great event with overzealous decisions. Another question I have about the incident was why was there no judges’ inquiry? Does it mean that if it wasn’t for a frivolous claim of foul by Flavien Prat, the results would have been unchanged? Food for thought. I am not alone in this argument. Bob Baffert is among those that agree with my take on the matter.

I think I have a solution to the problem. In major races i.e.: The Kentucky Derby, or The Hambletonian when a horse clearly is the best but has incidental contact or commits an infraction that obviously has not eliminated another horses’ chances of winning — as happened Saturday as well as in the 2017 Hambletonian — a substantial fine should be assessed and there should be no disqualification. This formula would have totally reduced the pain of Servis et al on Saturday and Burke et al in 2017.

Back to our sport, the Sunshine Meadows contingent certainly made amends for their lackluster performances last week, only leading me to note how smart the trainers were to race their charges easily after the long ship. For those of you that couldn’t help but email me how wrong I was about the Captaintreacherous offspring after the odd happenings last week I remind you that “the proof of the pudding is in the eating.” By the way, I am still certain the track in South Florida is short.

Congratulations to my friend Joe Holloway on winning his 1,000th race. It’s probably more like 1,500 because old guys like us were not in the record books till 1992. I remember a girl from the USTA called me about 15 or so years ago and said, ‘Congratulations Ronnie, you just won your 600th race.’ I went nuts. How could that be possible? Simple. Half my training career came before they included trainer winnings.

Congratulations to Marcus Melander and Per Engblom for winning the Cutler Memorial at the Meadowlands and the Dexter Cup at Freehold Raceway, respectively.

Bill Pearson asks: I read an article in the Sunday New York Times about PETA (People for the Ethical Treatment of Animals), drugs, whips and Lasix, should we be concerned they will soon turn their attention to our sport?

Most of the leaders of PETA are horsepeople themselves and many are from Kentucky. There is a method to their madness, although to this writer it is a bit overzealous at times. Our horses are significantly tougher and sounder than thoroughbreds are. The rate of total breakdowns in our sport resulting eventually in death is close to non-existent. What happened in Santa Anita was what you might call “the Perfect Storm.” Persistent rain pummeled the track for weeks on end with flooding and track erosion. Although they seem to have righted the ship, they certainly opened a can of worms. PETA has had meetings with them, Keeneland and Churchill in recent weeks and are causing a major upheaval in the rules and regulations at those venues.

I don’t think we have to worry about PETA, but we must think twice before making major changes to our procedures. For example, I fear that banning the use of race day Lasix would just put more trainers in jeopardy of punishment. Does anyone honestly think that after banning Lasix, a trainer would just give all his bleeding horses to the Standardbred Retirement Fund? That’s crazy. What will happen, in too many cases, the horseman will use other drugs readily available to control bleeding and administer the race day meds themselves. The entire situation would create unnecessary exposure to punitive action. There are deleterious effects of Lasix the worst of which is dehydration, but take into consideration that all horses bleed, some worse than others, the use of Lasix is of major financial importance to the sport.

Point two, I don’t think the average fan would be happy to see horse racing without whips. They do it in Europe and to me, it is strange. We have modified the whipping rules and you rarely see a driver hitting a horse in a vicious manner as they had in the past. Today it costs them a fine or even suspension for any misuse of the whip.

The basic reality to all this banter is that either way we will survive. With or without whips and Lasix we are resilient enough to make the best of the situation, I just don’t want any rash decisions because of fear of PETA interference.

While on the subject I get many emails, mostly anonymous, from readers that are amazed that we haven’t come up with a more comprehensive test for Epogen or any blood enhancing drugs. I wish I had an answer. Many have stated that the drugs are widely used and very accessible. We must do something to change this. I realize it is a matter of economics, but we can afford to partner with the tracks and give up let’s say one per cent of our purses to be matched by the tracks for testing research.

Harrison LeVan asks: Question one: Do you think the recent demise of B tracks will hurt the sport, because it erases opportunity for young drivers to get a start. Question two: when do you decide you can use brace bandages instead of trotting boots?

In my opinion most of the tracks are B tracks — with the exception of The Meadowlands, Mohawk and Yonkers that are the sole remaining A tracks we have left in operation. We have lost more what you would call A tracks than we have lost B tracks and new B tracks are in the planning stages as we speak. Truly major venues, like Roosevelt, Liberty Bell, Brandywine, Sportsman’s, Balmoral, Maywood, Greenwood, Woodbine, Blue Bonnets, all had Grand Circuit events and are missed by all. We desperately need new catch drivers, but the lack of new talent has nothing to do with lack of racetracks, it’s due to lack of interest in our sport by younger people. I remember when you would see one or two P drivers on every card. I don’t remember the last time I saw one. We have more tracks than we need, the trouble is we don’t have enough patrons or horses to fill them.

On to brace bandages. I use them to start on all horses. I only use boots when I cannot clean up a horse’s gait to my satisfaction. Continentalvictory never wore a boot. She did brush her left hind ankle and even drew a bit of blood on occasion, but I never changed. The same is true for Self Possessed, Victory Dream and Cantab Hall, none of them ever turned a hair on a hind leg. To me, boots irritate, create a fatter target for interference, and don’t make a colt go as wide as bandages do. We are in an era where a lot of babies run down (fetlock brushes against the ground) which is very painful and cause a radical change in gait. If you are already employing bandages, it is easy to add run down patches for protection.

Bob Asher asks: I have a colt that runs in very badly. I have tried all kinds of burrs on my headpole and nothing seems to work. Can you help me?

Your problem is not an uncommon one and unfortunately I have met with the same dilemma all too often. You always hear horseman say the colt has a bad habit he always runs in in the first turn. I don’t buy it. I believe horses run in or out 95 per cent of the time to run away from pain, and I would add that 90 per cent of the time it comes from a sore knee. I am not saying a foot or ankle or even a shoulder could be at fault but I think rarely.

Before fooling with more equipment I would try blocking (injecting an area to eliminate pain) a few places. First the right knee, then the right front ankle and next the right foot and last the left foot. If the latter surprises you it surprised me too. I have seen a few case where a colt is sore on the inside of the opposite foot causing him to run in or out as the case may be.

As far as fancy head poles, I will refrain from the exotic or risk phone calls or visits from PETA.

I will say I have had great success using a fresh plastic burr, and cutting off a two inch piece of garden hose and slipping it over the headpole strap before putting on the headpole which will force it much closer to the neck.

Lastly you could try a full cup (hood with a total cover to one eye) over the left eye, I have seen this work wonders on occasion.

Thanks to all my readers for the kind words. I would prefer if you feel like battering me that you use real names, and it would provide more interest if you have constructive criticism to address it to HRU letters to the editor or feedback rather than ending up in my junk mail. Please look for my Road To The Hambletonian coming soon. Have a great week.