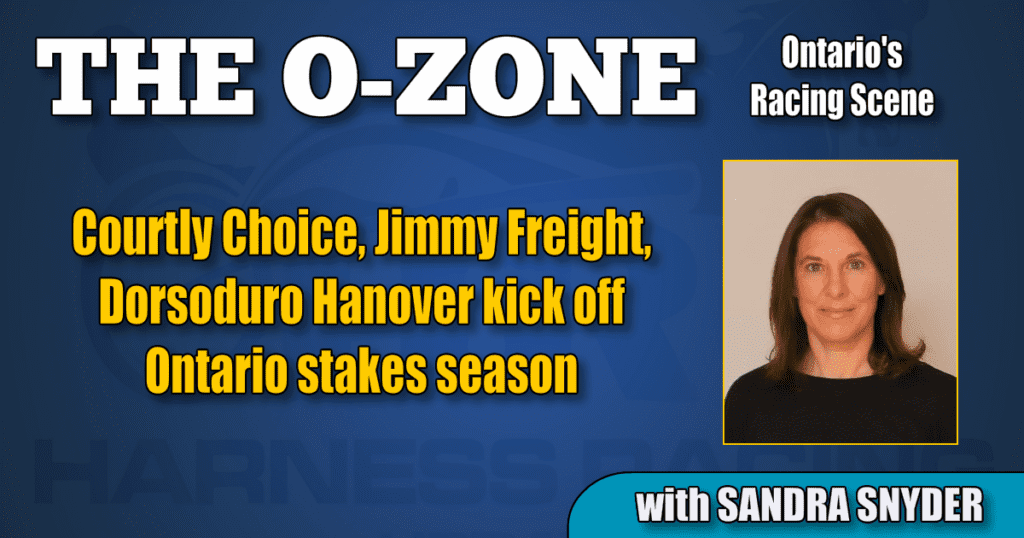 Apart from the SBOA stakes at Mohawk and star-heavy eliminations for the Confederation Cup at Flamboro this weekend, summer favorite Clinton Raceway is also opening.

Stakes season gets under way in Ontario this weekend with five eliminations for the Standardbred Breeders of Ontario Association (SBOA) stakes at Woodbine Mohawk Park on Saturday, May 11 and two Confederation Cup eliminations at Flamboro Downs on Sunday, May 12.

Three divisions of sophomore pacing fillies and two divisions of trotting fillies will compete for a berth in their respective SBOA finals, which go postward on May 18. On the trotting filly front Champagne Jane, Teddys Little Angel and Presto Change O carry the biggest bankrolls into the contest, but all three fillies will start from outside posts in 11-horse fields, Champagne Jane from the nine-hole in the first $25,000 elimination and Teddys Little Angel and Presto Change O from the eight and nine-holes in the second split. The top five fillies from each elimination will advance to the final.

In the pacing filly division 2018 Ontario Sires Stakes Super Final champion Summer Charm (Post 4) and runner-up Better Single (Post 5) will renew their rivalry in the second $25,000 elimination, slated as Race 2 on the 7:10 pm program. The top three finishers in each elimination, plus one fourth-place finisher drawn by lot, will move on to the May 18 final.

“This is where everything starts to count, where you have to pay starting fees and you line up for the eliminations,” said trainer Richard Moreau, who will send out Summer Charm for the first time on Saturday. “It will be a little bit more entertaining all summer.”

The 41st edition of the Confederation Cup kicks off at 6:55 pm Sunday with 16 4-year-old pacers aiming to qualify for the May 19 final and add their name to a trophy that has been captured by harness racing legends such as inaugural winner Governor Skipper, Cam Fella (1982) and Somebeachsomewhere (2008).

The elimination fields are full of heavyweights from Ontario and beyond, including both the 2018 Ontario Sires Stakes Gold Series and Grassroots champions, Jimmy Freight (Post 8, Race 9) and Pretty Handsome (Post 3, Race 6), winner of the opening leg of the Graduate Series Courtly Choice (Post 2, Race 9), along with million dollar winners Dorsoduro Hanover (Post 1, Race 9) and Lather Up (Post 7, Race 9).

“The 4-year-old division this year looks to be as tough as the aged division really. With Dorsoduro (Hanover) and Lather Up and Done Well and Jimmy Freight, it’s a very tough division and a great year to watch all of them,” said trainer Blake MacIntosh. “I think with all those horses they’re going to have a great crowd next Sunday (May 19). If they all make the final it will be one hell of a race, that’s for sure.”

MacIntosh’s Courtly Choice has about a five minute ride from his stall at Meadowbranch Training Centre in Flamboro to the racetrack and the son of Art Major and Lady Ashlee Ann has already proven his half-mile bona fides, winning the Little Brown Jug in his $922,158 sophomore season.

“He raced great last week, he qualified great both times, we’re really pleased with the way he’s come back this year,” said MacIntosh, who makes his home 15 minutes from the racetrack in Cambridge, ON. “The two-hole is a great post for him, really pleased with that. It’s going to set up to be a little bit of a speed duel up front I think, because I think both of the two outside horses are going to leave out of there and try to get positions. Hopefully we can hold our position from the inside and it all works out.”

The top four finishers from each elimination, plus one-fifth place finisher drawn by lot, will advance to the May 19 final. The Confederation Cup Final undercard will also kick off the 2019 Ontario Sires Stakes season with Gold Series action for the 3-year-old trotting colts and the Grassroots opener for the 3-year-old pacing colts. During the May 19 final, fans can also enter to win one of five shares, including free training for one year in a TheStable.ca racehorse.

May 19 is also opening day at Clinton Raceway and, in addition to the usual Super Sunday Show fun, fans can acquire an opening day t-shirt for just $2 and kids will have 10 chances to win a bicycle. Sunday’s charity partner is the Central Huron Secondary School and the Phoenix will be running a 50-50 draw, silent auction, trackside barbecue and bake sale.

“The good thing about Clinton, every Sunday they have a different charity, whether it’s a hockey team or something, and they do 50-50 draws to help out the community all around the track,” said Pat Bissett, Clinton’s leading trainer in 2018. “Every Sunday they do something. (General Manager) Ian (Fleming) does a great job.”

After spending the winter racing his nine horses at The Raceway at Western Fair District, an 80 kilometre trip south of his barn at Clinton, Bissett is looking forward to the track’s opening day.

Among his stable of two trotters and seven pacers, Bissett is hoping that 3-year-old Classic Tina can help him to a second training title this season. The daughter of Sunshine Beach and Ramilette Hanover raced twice last fall and Bissett is hoping a few extra months of maturity will help the filly shed her youthful antics and show off her raw speed.

“I’m hoping that Classic Tina, my 3-year-old, comes along well. She’s got speed — I raced her twice as a 2-year-old — but she’s a little bit goofy, so I’m hoping she’s a little bit calmer,” said Bissett. “I’m going to qualify her Saturday and try to race her opening day in Clinton.”

In addition to the opening day festivities, some of the highlights of Clinton’s 15-day season include the biennial Legends Day on June 23, the $60,000 Kin Pace Final on July 7, the Vic Hayter Memorial Trot on July 21, Kids Day on Aug. 24 and the annual Charity Drivers’ Challenge on closing day, Sept. 1. Post time for each Sunday afternoon card is 1:30 pm.

In addition to the racing, families love Clinton for the adjacent swimming pool and picnic-friendly grounds. An exciting new play structure is also under construction for the youngest fans.

After a full day of fun at the racetrack Bissett suggests families stop into Bartliffs Bakery and Restaurant or Willy’s Burger Bar.

“Bartliffs is a really good restaurant, really good home cooked food. It’s a really good place. Then there’s a place coming in from the lake called Willy’s, they have really good burgers,” said the trainer, who makes his home near the Lake Huron town of Goderich, ON. “Those are the two best places I think to eat in Clinton.”