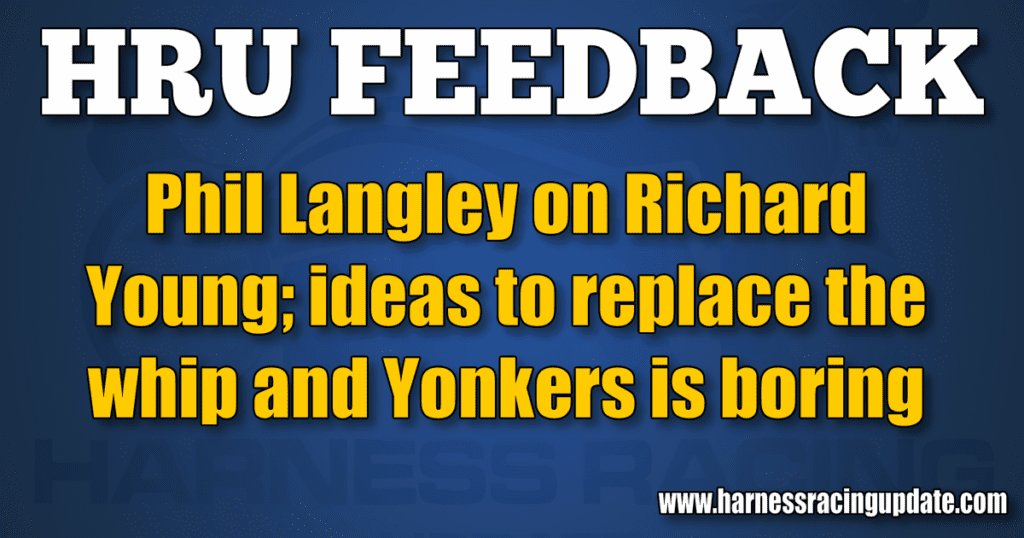 In a recent edition Richard Young hit the nail right on the head (full story here).

There is no question the recent fatalities at Santa Anita will be seen by groups like PETA (the People for the Ethical Treatment of Animals) and probably even some of the non-horse racing general public as typical of all horse racing. This is not a new happening in thoroughbred racing as you should remember the New York tracks had a similar situation only a few years ago. The solutions offered weren’t much different than those now being tossed about. I doubt stopping bute, Lasix or other therapeutic medications is going to solve the problem or more veterinarian scrutiny will do much either. The problem has to be the evolution of the thoroughbred horse by the breeders. I remember in my youth that horses like the great Citation raced regularly instead of now and then. For those of you that ever watched the TV series “Mr Ed” they were wrong with the introduction song “a horse is a horse of course” Not true. Standardbreds, for one, are different and thank god don’t have even close to the fatality rate of the TBs. In fact a few years ago the USTA did a study and most harness tracks didn’t have even one. The results haven’t changed in recent years.

The question for us is how do we convince the “Mr Ed” believers. In my years as USTA President I appeared before several racing commissions and I think at least twice before the Racing Commissioners International. In fact, continuing that mission, just a few weeks ago a committee from USTA led by Joe Faraldo met again with RCI to espouse separate rules and standards for harness racing and was well received but not enough to get more than a “ might be ok” and we will study.

I often received the same response. Many times the commissions can’t see why there can be different rules especially when one commission governs both breeds. Years ago, Joe Faraldo in a case argued and won before the US Supreme Court that there could be a separation of breeds. I was pleasantly surprised when one of the Illinois RB members ( Byrne) knew the case. That did get some difference in Illinois rules. Not enough but some recognition.

I know USTA and many directors have tried diligently to get this point across many times. But Mr. Young is right that this time it could become more serious. I have no good answer other than to publicize the safety of our sport whenever possible. Also we need to continue to request a separation of rules.

If you watch races, you can see how often many horses improve their efforts in direct relation to the expert use of a whip by a professional driver. Many horses would never reach their full potential if whipping was banned. Some wouldn’t even try. At the same time, there is a strong belief that horse whipping keeps people away from harness racing. Are there answers? Of course there are. There are always alternatives. I see two categories off the top of my head — old school and technology driven. A third variation might be to combine the two.

Old School —The most obvious solution seems to be to extend the saddle pad to cover the horse’s hind quarters and every place the horse’s anatomy might be exposed to the whip. Everybody is happy. You can take that a step further. Have a noisemaker in the pad that will be activated when struck with the whip. The proper sound can determined by a consensus of horsemen.

Technology — Instead of holding a whip, the driver holds a controller. Press the button on the controller, and a sound comes out of the sulky. A loud noise? The sound of whipping? The sound of a natural predator of the horse? King Kong bellowing and pounding his chest? Again, the horsemen would best decide.

Combine the two — This could be fun. Engineer the sulky so that the movement of the driver in the sulky generates the sounds. The more the driver moves, the louder the sound.

You had better think of something ladies and gentlemen because THEY are out to get you.

I follow Yonkers Raceway as I feel I have a better shot at half-mile tracks. But I’m afraid I’ll fall asleep as race after race seems exactly the same. There doesn’t seem to be any excuse for it.

I’m encouraged that YR is starting to card 1 1/16 mile events as it gives the outside horses a better shot (does anyone have stats on this? I’m too lazy). But this doesn’t solve the underlying problem, which seems to me to be that nothing happens from the end of the first quarter until the 5/8’s pole. Horses and drivers sit still as if hypnotized and this essentially prevents any horse that’s not within three lengths of the leader from having a shot.

Instead of 1 1/16 mile races, I think the solution is to hold 9/16’s of a mile races. Go around once, with a stretch run at the beginning and at the end. There wouldn’t be any dead time — it’d be just action all the way through.

Bettors would need some re-education but we can do it. Imagine more exciting races with movement all the way through! Will some track try it?