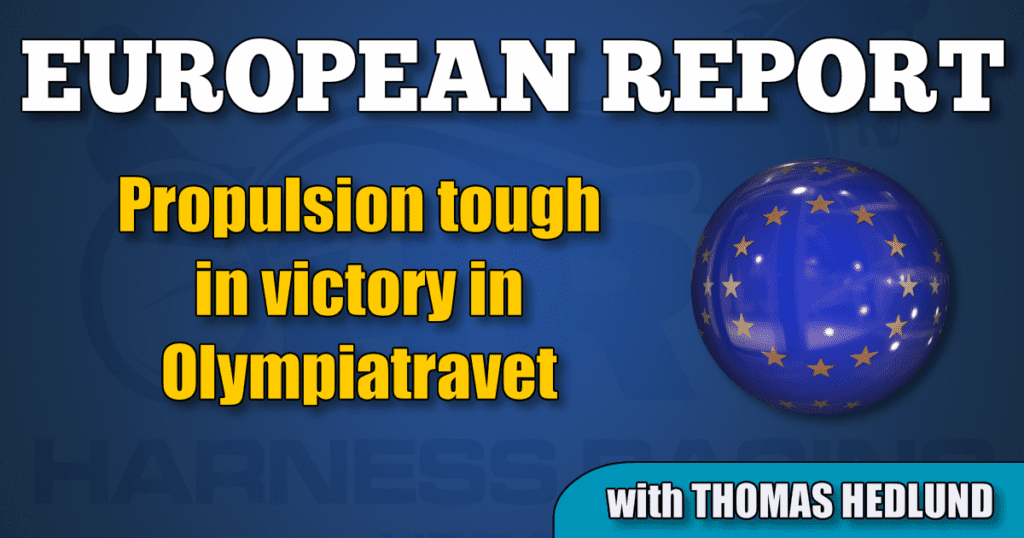 Propulsion tough in victory in Olympiatravet

Trainer Daniel Redén’s 8-year-old Muscle Hill son Propulsion didn’t get anything for free in the $315,000 Olympiatravet at Åby racetrack on Saturday afternoon. From post seven behind the gate, Örjan Kihlström took a safe start with Propulsion and the duo was placed in fifth over after a quarter of a mile.

At the back stretch, Cyber Lane and Propulsion fought side by side while Muscle Hustle started to get problems to follow in second over.

Åby racetrack has open stretch and pocket-racing Handsome Brad seemed to challenge Propulsion mid home stretch, but the Muscle Hill son once again showed that he has the will to race, more than most other horses in the world.

”I don’t know what he is made of. I get emotional when he performs like this. Normally, you don’t win after a tough race like this. He’s just phenomenal,” said Kihlström after the victory in mile rate 1:54.1 over 1.3 miles.

A shot at the Elitloppet is not yet set for Propulsion.

“I haven’t looked where he can start before Elitloppet. I’m just so proud of him and I’ve never trained a horse that has strength like him,” Redén said.

Aubrion du Gers in a mile

Jean-Michel Bazire trained Aubrion du Gers (Memphis du Rib) won the $100,000 Criterium de Vitesse de Basse Normandie on Saturday in Argentan, France. It was the trotter’s first race over the mile.
From the lead, Aubrion du Gers had to fight hard to keep Bille de Montfort behind him, but the gelding’s 14th straight win was a fact in a moderate 1:58.1 mile.