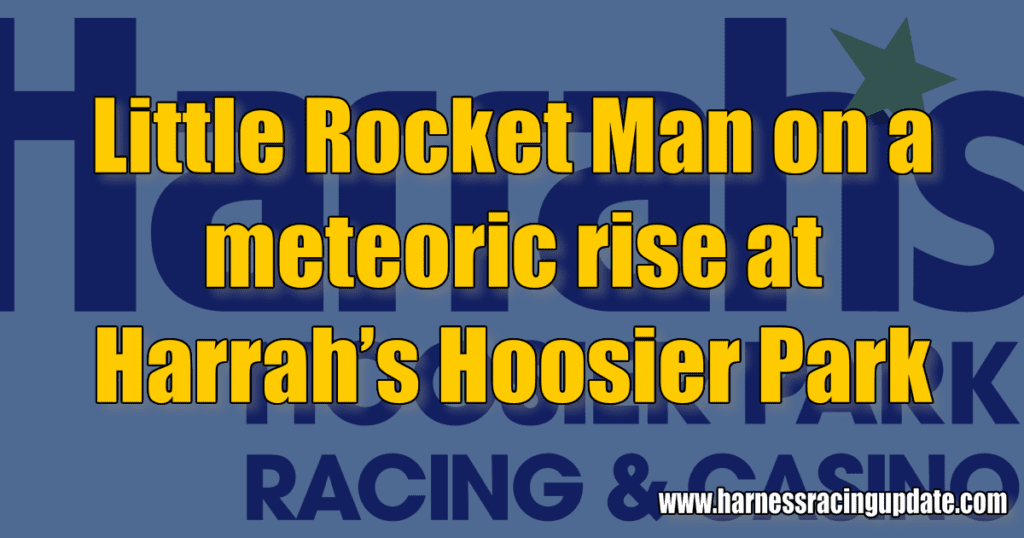 Originally slated to be an Indiana Fair Circuit horse, the tiny pacer — named for Donald Trump’s nickname for the dictator of North Korea — is dropping jaws in the Hoosier state for Russ Beeman and Jack Freeman.

Russ Beeman and Jack Freeman paid their horse, Little Rocket Man, into the Indiana Sired Fair Circuit this year with sights set on trying to recoup their investment. The fair schedule does not start until early June, but don’t look for the Rockin Image gelding to make an appearance. In the first three starts of his career, Little Rocket Man has shown he has the skills to mix it up in Indiana Sires Stakes competition at Harrah’s Hoosier Park Racing & Casino. Tonight he will be sent off as one of the favorites in the $15,000 final of the Jerry Landess Series after winning a leg last week in 1:52.4, raising his record to three wins in as many starts.

“You just never know until they get behind the gate,” said Missy Essig, Beeman’s daughter and the sophomore’s trainer. “He surprised us, that’s for sure.”

Little Rocket Man has turned into a horse that nobody saw coming. Training down, he was known more as a lollygagging pacer than an up-and-coming talent. When jogging, he required two headpoles to try to keep his focus on the work. The diminutive gelding, all 15 hands of him, masked his potential well. However, all that changed the first time he moved in behind the starting car. After a qualifying effort where he paced second in a time of 1:58 for driver Trace Tetrick, Little Rocket Man won his debut by nearly three lengths with a 1:53.4 clocking. He matched the performance with another 1:53.4 mile in the opening Landess Series leg, this time a five and one-half length margin at the wire.

“We were kind of concerned about how small he is and how fast they have to go,” Essig said. “So we were very surprised his first start that he paced in 1:53.”

Purchased at the 2017 Hoosier Classic sale, the colt sold for $18,000 with Freeman signing the ticket. Essig and Beeman knew the family well, as his dam, GT Miss Royal, had raced out of their barn for a stint during her 10 seasons of competition. Little Rocket Man did not make it to the races as a freshman, however. When it was decided the ridgeling would be castrated, the surgery was extensive and required 45 days away from the track. Beeman opted to pull the plug on the season instead of starting again from square one.

Sold out of the Victory Hill consignment with the name Just Like Pete, Beeman’s wife, Jackie, came up with the name Little Rocket Man, referencing President Donald Trump’s nickname for North Korean dictator Kim Jong Un. As it turns out, the name is more than fitting in light of the gelding’s most recent performance. Small as he may be, Little Rocket Man captured the second leg of Landess Series action with a 1:52.4 effort, blazing home in :25.2 to upend favored Feherty and Peter Wrenn by nearly two lengths. Goodbye fair circuit.

“I did not ever expect him to come home a quarter in 25 and a piece,” added Essig. “I just try not to get too excited. We’re going to take it day by day.”

Last season, Tetrick was matched with relative unknown sophomore Always A Prince. The gelding went on to win 19 of 22 starts and banked nearly $500,000. Hoosier Park’s leading driver is not making comparisons to last year’s Pacer of the Year, but he sees Little Rocket Man as a horse capable of being competitive this summer in Indiana Sires Stakes action despite missing his freshman campaign.

“I think the colt will be effective wherever he goes. I think he’s got a shot to be a good one. He’s got the tools,” Tetrick said. “Every time we’ve raced him he’s paced hard right through the wire and into the turn, and never really been tired when I pulled him up. He hasn’t been exhausted to do it yet. This colt has enough tactical speed early that you can sit up close and save him midway through there, and when you move him again late, he’ll still have a good brush to him.”

Several of last year’s top freshman pacing colts have yet to qualify or have recently qualified, so it is hard to gauge just where Little Rocket Man will stack up by comparison. That has not stopped suitors from calling, hoping to acquire the 3-year-old. Beeman, who lives north of Hoosier Park in Alexandria, and Freeman, an Anderson resident, are set on keeping the speedster to enjoy this season. For a small stable – seven currently racing and 15 total in the barn – a good horse is hard to come by.

“As soon as he crossed the line and beat Pete’s horse last week, before I could get from the winner’s circle back to my table, I had phone calls and people wanting to buy him,” she said. “My dad said they’re not giving him away.”

Still, if Little Rocket Man continues to impress and offers were to increase, it might be difficult to say no. That is the nature of the business. Just as owners dream of adding a talented horse to their holdings, small stables pin their hopes on a homegrown contender that could get them to the winner’s circle in the big events. For Essig and her parents, they last won a pair of Indiana Sires Stakes final in 2012 with freshman trotter Russell Mania and 3-year-old Dontfusswithruss.

“It’s been a long time coming. I know there are a lot of good ones not qualified yet, but if we can have a stakes contender that would make my year,” said Essig. “They’re hard to come by when you have a small stable.”

The Jerry Landess Series final is slated as the ninth race tonight at Hoosier Park. Little Rocket Man has drawn post three, with Rockie Got Framed, another horse with a 1:52.4 win to his credit, to his outside in post four. Estimated post time is 8:54 p.m.