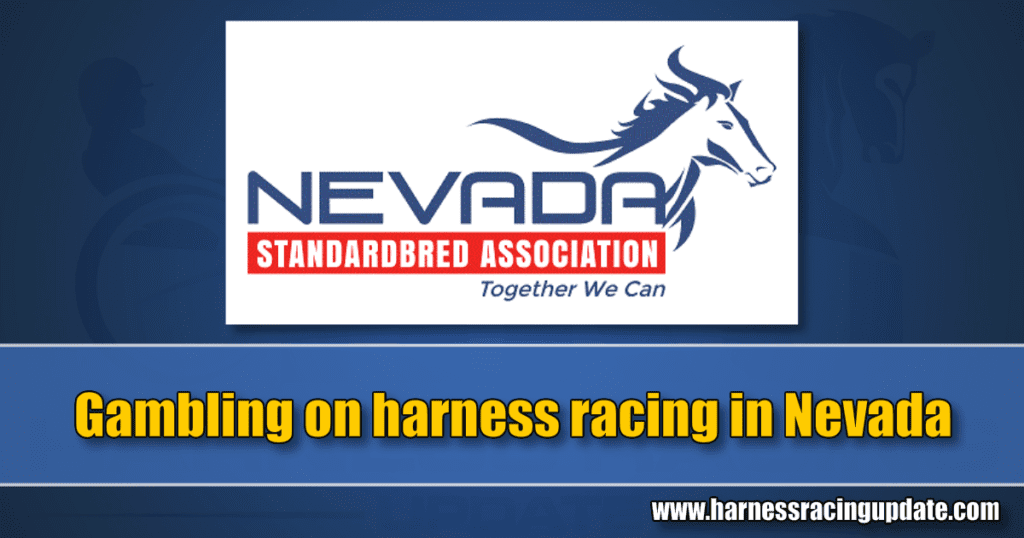 Gambling on harness racing in Nevada

If Timothy Bohannon and others connected to the Nevada Standardbred Association get their wish, harness racing will be held at three tracks in Nevada in the not-too-distant future.

Harness racing in Nevada? Real chariots at Caesar’s Palace in Las Vegas? The odds may say no, but a group of harness horsemen have been working on ambitious plans for more than a year and is making substantial progress trying to initiate harness racing in the state at three sites.

Though it’s little known, Nevada has a spotty history of thoroughbred, quarter horse and even pari-mutuel mule racing – including clones — dating back some 80 years.

Now TJ (Timothy J) Bohannon, a 55-year-old CPA, decorated U.S. Marine, harness racing owner and fledgling amateur driver, is trying to bring harness racing to the desert with three tracks, the first one in Laughlin at the southernmost tip of the state with a racino on land leased by the Fort Mojave Indian Tribe; the second in Reno tied into the Diamond Harness Alliance with Cal-Expo, and the third in Las Vegas.

“A lot of people ask, ‘Why not Vegas first?’’” Bohannon said. “We’ve got a long way to go. We want to get to Las Vegas when we have the breeding stock to support it. The key is you have to have horses out there. And real estate is very high in Vegas. In Laughlin, it’s a fraction of it. We want a polished show when we go to Vegas.”

The project formally launched Nov. 21 with the creation of the Nevada Standardbred Association (NVSA). A website (www.nevadastandardbreds.com) was added in January. Yet Bohannon, who is the NVSA president, is dead on-target when he says, “We have a long way to go. We began an endeavor believing that it might take 10 years to hatch, but due to the tremendous support of others joining in the journey, the timelines have been accelerated.”

Those others include 50-year-old driver/trainer Bobbi Jo Martin, her husband John and daughter/trainer Jessica Milner, all harness racing lifers at Northfield Park in Cleveland; and 70-year-old Gary Kennedy, an oil company manager/standardbred and thoroughbred owner. Kennedy owns a 130-acre farm and a half-mile training track in Needles, CA, three miles from Laughlin, where, he hopes, a racino will be built thanks to the Fort Mojave Indian tribe needing horses to consume vast amounts of hay that the tribe produces and ships out. Martin is the NVSA secretary; Kennedy is a district leader.

Plans include a sire stakes program for 2-year-olds, 3-year-olds and older horses.

Can this actually happen?

“There’s always a chance if you push hard enough,” Bobbi Jo Martin said. “I believe, with all my heart and soul, we will open. I think we have a lot of good people behind us. We have some pretty strong connections behind us.”

That includes Bohannon. “He owns a horse in the barn with my daughter,” Martin said. “He told me his idea to start racing in Nevada. He said, ‘Would you be on board helping me?’ I said, ‘Absolutely.’ He’s the guy you meet and you just know he’s a good guy. He would eat, sleep and live horses if he could. He puts his heart into it.”

Ironically, their mission wouldn’t have started if Bohannan had not suffered a heart attack three years ago. “After the heart attack, I said I want to get back to harness racing,” he said. “We were involved back in the 1980s at Scioto Downs. I decided I’m going to go the USTA driver/training school in Goshen last May. I wanted to practice to become an amateur driver. For me, there is nothing better than being behind a horse. That’s a passion for me. I want to do what I want to do. For me that’s horses.”

Born in Sikeston, Missouri, Bohannon was the son of a minor league baseball player in the Minnesota Twins organization. “We were all over the place,” Bohannon said. “We settled in Bloomington, Indiana, and we ended up moving to Newark, Ohio, in the 1970s.”

In Ohio, Bohannon’s stepdad and mom established Bardon Stables. “We have 17 horses at one time,” Bohannon said. “We had some broodmares and yearlings that we sold at sales. That was my foundation.”

But it wasn’t his immediate future — business was. He worked for JP Morgan Chase in Columbus, Ohio, as a risk management consultant with clients in a variety of businesses including banking, life sciences, media and venture capital. Most recently, he was vice president of modern governance and controls. Then a heart attack, caused by high blood pressure, re-ignited Bohannon’s passion for horses after more than a decade without racing. He bought a couple of horses with VIP Stables, and when trainer Kelly O’Donnell let him jog one of his own horses, he decided to go to the USTA’s Driving and Training Program in Goshen, NY, home of Harness Racing’s Hall of Fame, in 2018.

And he hatched an idea. “My friends have been in Vegas for 20 years,” he said. “I see opportunities out here. I don’t shrink from a challenge. I said, ‘Let’s get this thing started.’ I said, ‘Let’s do it now. Let’s get it going.”

When he was laid off from JP Morgan Chase in September 2018, he suddenly had all the time in the world. “That enabled me to begin the journey,” he said.

And he did his homework.

Horse racing has been conducted in Nevada intermittently for decades. Thoroughbred racing was held at Las Vegas Downs in the 1930s. On Sept. 4, 1953, Las Vegas Park opened for thoroughbred racing, but racing only lasted 13 days. Quarter horses raced there for several weeks. Eventually Las Vegas Park Speedway took over the property, offering NASCAR racing and USAC stock car racing. The property was sold and became the Las Vegas Country Club.

“It struck me that the foundation for horse racing, sufficient stock and training facilities weren’t built first,” Bohannon said. “Which is why the emphasis on breeding operations is very important.”

Thoroughbred racing, however, is still going on in Nevada at the six-day Elko County Fair, which attracts more than 20,000 people annually. Racing will be held this year on Aug. 24-25, 30-31 and Sept. 1-2. Additionally, White Plains Racing has operated thoroughbred racing for a two-day meet intermittently. And the Humboldt County Fairgrounds offers two days of pari-mutuel racing, which drew international attention when officials allowed cloned mules to race against real mules.

Although county fair meets around the country have conducted harness racing for decades, Bohannon said the most the NVSA can do at these Nevada fairs is show standardbreds in exhibitions or demonstrations. “We could maybe jog them on the track,” Bohannon said. “We won’t be able to race there, but we will be able to demonstrate horses. If not this year, next year.”

The focal point now is Laughlin and getting harness racing in Nevada started. Located alongside the Colorado River, Laughlin is where Nevada, California and Arizona converge. The area is already a popular resort destination that includes the thriving Avi Resort & Casino on the land owned by the Mojaves, “The People by the River.” The Mojaves own 42,000 acres in Nevada, Arizona and California. Plans call for a racino with a five-eighths or seven-eighths mile track and a training facility that houses at least 500 horses.

“I’ve got a good understanding of the Mojave tribe,” Kennedy said. “They raise a huge amount of hay, 50,000 tons. And they have to ship every bit of it out. They never had a market for their hay. When I took the idea of a racino here, I talked them into giving us 640 acres to make this facility work. The Mojaves can only lease property, not sell it. They said they’ll write the lease any way we want. The thing that makes it work is that the Mojave nation needs a market for their hay.”

What’s left to do is the approval of the racino proposal by the Mojave Tribal Council. “Then we can break ground,” Bohannon said. “We’ll have racing, a training operation and a breeding operation. And places for people to stay.”

If Laughlin opens, Reno will be up next, a project done in cooperation with Cal-Expo and the Diamond Harness Alliance. Started in 2006 by the California Harness Horsemen’s Association, the alliance includes tracks in Alberta, Iowa, Maine, Manitoba, Michigan, Minnesota and Wisconsin who work in concert with the California track. The alliance promotes complementary scheduling and offers purse enhancement and reimbursement of shipping expenses. “We want to be complimentary to Cal-Expo,” Bohannon said. “We’re waiting on an update from the California harness horsemen to include us in the Diamond Harness Alliance. This is a few years down the road.”

That makes Vegas even more distant, which may be a very beneficial, reasonable approach.

The logo for the Nevada Standardbred Association proclaims, “Together we can.”

Bohannon said, “I really believe that. I want people to understand what we are doing. We’ll just keep pushing. We feel pretty strong about it. We like where we’re going with this.”

The sky’s the limit. And isn’t that why people go to Nevada?