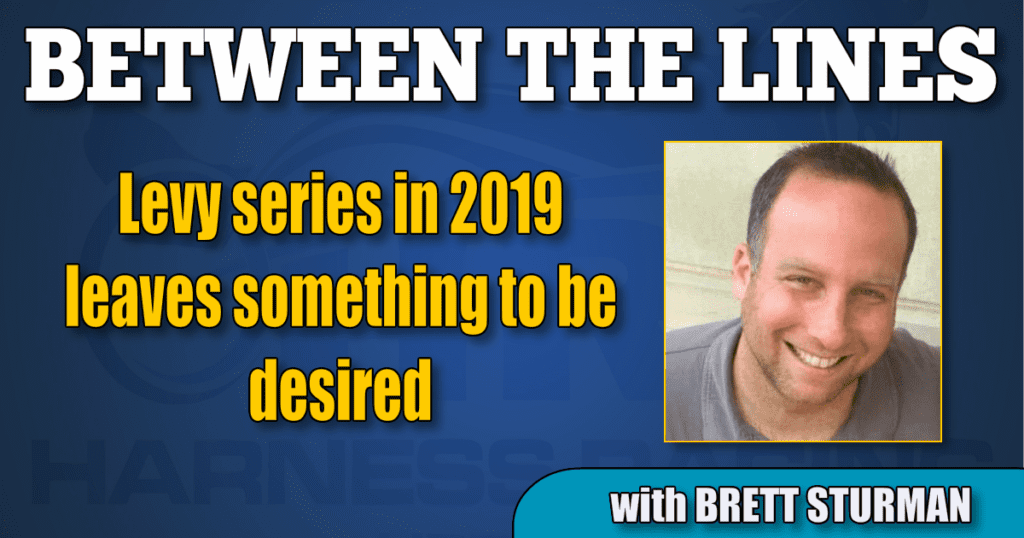 Levy series in 2019 leaves something to be desired

Maybe it’s just me, but this year’s Levy series at Yonkers seems unsatisfying. Heading into Saturday’s Levy final with a monster purse of $662,800 (the richest Levy final ever in history), let’s take stock of the series thus far and some ideas for what to do about it.

For starters, if you’re already someone who isn’t a proponent of the racing at Yonkers to begin with, then this series hasn’t been kind.

Nearly every race throughout the last five weeks of racing follows the same pattern. A sensible enough :27 and change opening quarter followed by backed-down second quarters of times ranging from :29 to :30. For example, the opening leg of the series there were six divisions. The half mile times of those divisions were :56.2, :57.2, :57.2, :57, :56.3, :56.4. These are times that would be acceptable for a bunch of $12,500 claimers, but not for a supposed group free-for-allers.

In last Saturday’s final preliminary leg there were four Levy divisions, as horses from the start had either defected from the series or had earned enough points to take the week off and rest. But the racing was still the same. The second quarter times of each of those races were :29.3, :30, :29.2, :29.4. In those races, every horse on the lead won with the exception of I’m Some Graduate, who folded to finish last though to his credit worked through a fast opening quarter. In two of the races, the half-mile splits were :57.4 and :57.1. Almost every race at Freehold earlier that same day went to the half mile in quicker than those times.

The reason for the slow fractions with little movement until the later stages of the race is because of the purse structure of the series. With five preliminary legs that go for $50,000 each, where is the incentive to try hard one week when you may fall into a more advantageous position the next week? It arguably makes sense to not leave the inside for as long as possible (even with no passing lane) and accumulate as many points as you can by finishing in the top 5, as opposed to doing anything “risky” in taking a bolder race-to-win strategy.

With five preliminary legs, a horse can afford less than an all-out effort for a couple of the races and still qualify for a big money consolation or final. Plus, even if it’s not a realistic goal for some horses in the series to compete for the final, there is a still a ton of money that can be earned by getting thirds and fourths each week when racing for $50,000 a pop. And don’t get me wrong – there is nothing wrong with any of this if you’re an owner, trainer or someone in anyway connected with the horses in this series – in fact it’s tremendous. But if you’re an observer or better yet someone betting, it’s a tough product to get into.

Maybe a solution could be to reduce the number of preliminary legs. Would it create more action if instead of five preliminary legs going for $50,000, there were only three preliminary legs that went for $100,000 each? You’d still have horses that are happy just to be there and will race conservatively to get whatever share of those purses they can get, but you’d have other horses that wouldn’t have the luxury of taking it easy in a leg knowing how much more critical it is to earn points with fewer opportunities available.

While the slow fractions are nothing new to Yonkers or the series, the overall talent level of the horses competing in this year’s series seems like a drop off from recent years. Not surprisingly, Western Fame will be heavily favored on Saturday as the lone horse in the field who also competed in last year’s final. What it comes down to is that with the exception of Western Fame, is this series going to produce any horses that go onto compete as legitimate FFA’s elsewhere. In recent years, Keystone Velocity and, of course, Foiled Again went onto do big things following the Levy; even Bit of a Legend N and Atochia were winners of the Levy that made their presence felt in other big races. I can’t see that happening with this group.

Many of the horses in Saturday’s final fall into a similar category of horses that will probably make a ton of money racing in upper level conditioned races at Yonkers and Pocono throughout the year. JJ Flynn had two races in January at Dover in NW7500 (he lost one of them) before quickly climbing the ladder. Anythingforlove A, More The Better N, Rodeo Rock, and The Wall are all horses that may or may not be favored in mid-upper level conditioned races depending on the post. What they all have going for them though is that they race out of super high percentage barns and without that factor, they maybe wouldn’t be in the Levy final other lesser percentage conditioners. Again, there’s nothing wrong with these horses having the chance to race for big money, but it doesn’t have the feel to a series that one should have when you think of free-for-all horses.

The Levy is slated for race 11 on Saturday, fairly late into the night considering that race 11 went off last Saturday at 10:39, and that last year’s Levy featured an infamous 18-minute post drag between 0 minutes-to-post and the actual time of the race. Hoping to still be awake come time of the big race, here is what it looks like.

WESTERN FAME has been heavily backed in every one of his Levy races thus far, including last week when he won at 1/9. He’s the obvious class of the field and would give trainer Rene Allard his 3rd straight Levy win and 4 out of the last 5 years (twice with Keystone Velocity and Domethatagain). JJ FLYNN actually beat Western Fame three races back as a big 20/1 longshot, so his very best would give him a chance; I’d imagine he’ll be going forward when the race begins. Give IDEAL JIMMY a ton of credit for racing as good as he has in this series considering he essentially missed all of last year. The post is the only real reason to go against because he’s been superb in the series. RODEO ROCK has consistently closed well off cover in this series and could do so again if the race unfolds for him. THE DOWNTOWN BUS has raced admirably throughout the series as a newly turned 4-year-old against older. ANYTHINGFORLOVE A or MORE THE BETTER N could sneak into an exotic because of their inside posts.