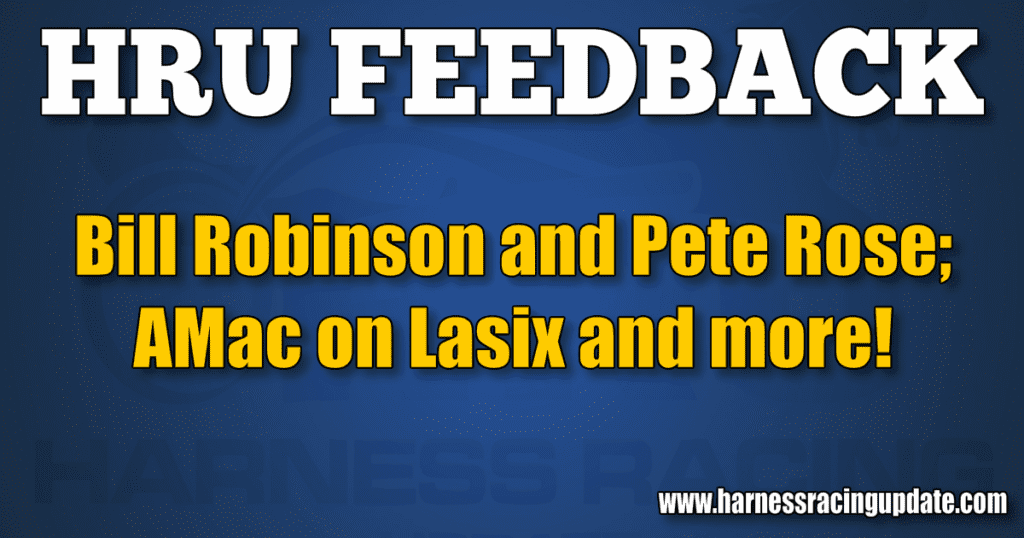 Bill Robinson does not equate to Pete Rose

Robinson equals McGwire, Sosa, Conseco. Not once did Pete Rose’s gambling aide to his 4,256 hits or .303 lifetime batting average.

If you broke rules that had NO effect on your accomplishments, then maybe a heartfelt apology might be enough. For McGwire, Sosa, Conseco and Robinson, sorry your numbers are skewed by the rules you broke. We’ll never know what your true abilities were. So, you guys can buy a ticket to get in to view the hall like everyone else.

Further to Larry Sultan’s feedback opinion (full story here) I’d like to add that Sammy Sosa, Roger Clemens, Barry Bonds and Mark McGwire will in all probability NEVER get into the HOF because of their use of PEDS during their careers. Needless to say, that these athletes are being judged by their integrity and this overshadows any accomplishments that may have achieved. Being remembered as the best cheaters won’t get you into the HOF in baseball and should be no different in harness racing regardless of ill-gotten gains. (full story here)

Do the experts really bet on their selections?

Wouldn’t it be nice if everyone who suggests a large Pick 4 or Pick 5 wager show a ticket on screen before the race? I sometimes spend the whole day watching many tracks. Each one has an expert suggesting the expenditure of a large amount on exotic wagers. I think it would be nice if the tracks and the betting websites showed verification that their experts actually have a real wager on their selections. I wonder if other bettors have had that same thought? It seems like on my TWITTER account only a few guys ever post a losing ticket. They almost always post when they win one.

I read the article in HRU (full story here) and multiple Facebook posts over the last week.

My take on this supposed “epidemic” is not as complex as some of the previous posts.

Lasix being banned is something I believe is a mistake and I’m not sure why we are even speaking about it in standardbred racing.

I think we all have concerns that the Drugs We Should Be Talking About, We Don’t.

I spoke in Australia and New Zealand over the past six months and found there is no Lasix in either jurisdiction or medications that are allowed to be given close to the races.

Positive tests for TCO2 are usually handled with a two-year suspension for a first time offender. Yet people still get them, and some trainers still train at a very high rate of winning. Cheating will always be present in sports. I think as a planet we have proven that.

In regards to bleeding:

If you bleed twice in either Australia or New Zealand your horse is banned for life.

That plays a role in so many horses with an (A) or (NZ) at the end of their name showing up in North America.

Lasix plays a far more positive role than a negative one in racing from my standpoint.

Recently we had a 3-year-old trotting filly racing who seemed to rather like 2:00-2:01.

(A bit upsetting but such is life.)

She was not finishing up her miles and sure enough, a trickle of blood was found in her airway. We placed her in the Lasix program, and 17 days later she was a drawing off winner in 1:58.1.

That information was readily available for the public and negates the “performance enhancing” criteria as far as the bettors are concerned. Had there not been a plausible reason for this improvement, some explaining would be needed (and rightfully so). That’s how our industry is set up. I’m not sure why everyone believes these massive changes need to be implemented?

Blood builders? Our penalties I believe are severe enough, but catching the culprits is obviously incredibly hard to do.

Out of competition testing is great, but not always fruitful.

Truthfully I have no idea how to catch these people without better and more accurate testing?

I hear people all the time talk about emulating European racing? Why?

Having two vastly different racing styles is good for our overall product. We (thestable.ca) just sold Lawmaker to Europe, and we have bought horses training and staying in Australia. There can be a healthy import and export of horses which is good for everyone in racing across the board.

To change because of anything other than horse safety, or the betterment of our product is a fool’s errand.

You want to change something?

Change that and you will then find the windfall we are all looking for.

Another thought on Lasix

(Editor’s note: The following letter was sent to our columnist Ron Gurfein and we thought it added something to the debate)

I enjoyed reading your recent article in HRU about Lasix (full story here).

One problem I see with the use of Lasix is different jurisdictions allow for different amounts to be used with different administration times pre-race.

I’d like to see a NA-wide collaboration on how much is administered and how soon prior to race time it’s administered.

I know this is a pipe dream but it would help out when a group is trying to do record keeping about the use/effects that Lasix has on race horses.

Now the next thing I think should happen is to hire a scientific group to see if there is a genetic marker as to if a horse is a bleeder or non-bleeder.
If it turned out that there was indeed a genetic marker the industry could then attempt to breed out this anomaly.

I realize this would take years to see the rewards of such a plan, but if the endgame is to stop the use of Lasix, maybe “the juice is worth the squeeze.”

There are other animal breeds that are using blood testing looking for certain genetic markers currently.