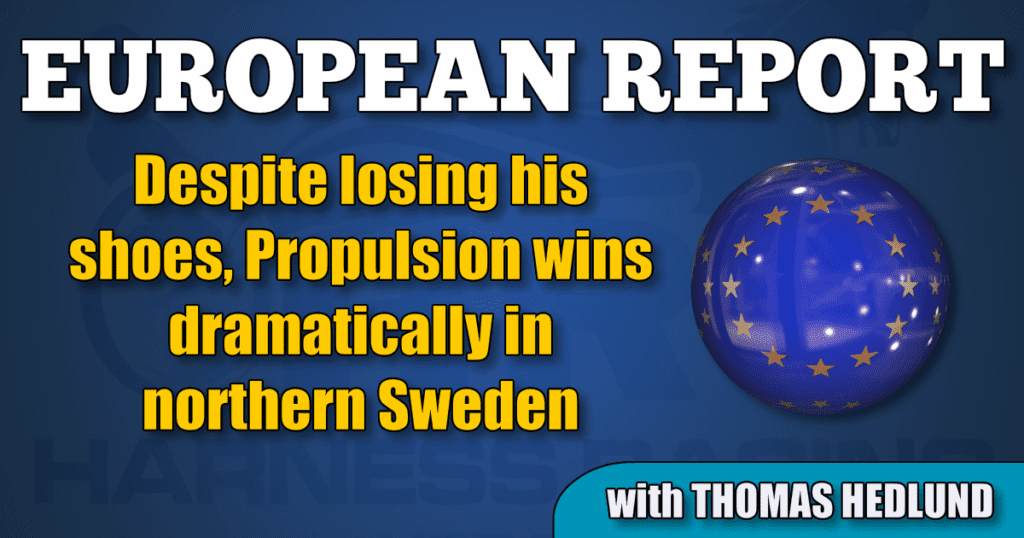 Despite losing his shoes, Propulsion wins dramatically in northern Sweden

Propulsion had already received a ticket for the final of Olympiatravet at Åby on April 27, but trainer Daniel Redén was eager to give his Muscle Hill son a race before Olympiatravet and sent Propulsion to Umåker in the north of Sweden on Saturday afternoon. And it was a dramatic day for Redén. Propulsion raced with shoes, which is unusual for him, and in the warm up one of them came off. In the heat after the parade, just minutes before the race, Propulsion lost the other shoe and driver Örjan Kihlström never got enough time to prepare his horse when the car started to roll.

Robert Bergh placed Muscle Hustle in front and Propulsion had to race without cover outside the leader in when the pace was high. Muscle Hustle seemed to leave Propulsion in the last turn, but when Kihlström pulled the earplugs in Propulsion, the 8-year-old champion sprinted away and won with three lengths in a mile rate 1:54,4 over 1.3 miles.

Hambletonian winner Perfect Spirit (Andover Hall) won a race over 1.3 miles at Örebro racetrack in Sweden on Thursday evening. The 5-year-old trotter sprinted in the lead and driver Örjan Kihlströ had everything under control in mile rate 1:57.2.

Four divisions of the Breeders Crown ($24,000) were held on the same racing card and American-bred Evaluate (Andover Hall), trained and owned by Stefan Melander, took an easy win from the lead for Örjan Kihlström.

Jean-Michel Bazire noted his Cleangame had to capitulate for stablemate Ble du Gers (Quinoa du Gers), driven by Alexandre Abrivad, when the $101,700 Prix Jean Riaud was held at Vincennes racetrack in Paris on Saturday afternoon.

Ble du Gers was served a nice trip and finished strongly to capture leader Cleangame just before the wire. The mile rate over 1.7 miles was 1:56.3.

Prix d’Amérique participant Eridan finished third and seemed to be in great shape. Eridan will race in the Finlandia-ajo in Helsinki, Finland on May 4 and will, among others, face Readly Express, Pastore Bob and Top Of The World over the mile.

In the $143,000 Seinäjoki Race held in Finland on Saturday afternoon, first choice Pastore Bob opened quickly for the lead and Swedish Breeders Crown winner Selmer I.H. got position outside the leader. Johan Untersteiner was allowed to keep a slow pace and Selmer I.H. got out of gait after a half mile. Trendy O.K. was then left first over and Alessandro Gocciadoro tried to put some pressure on the leader at the back stretch, but Pastore Bob looked well in the hands of Untersteiner.

Six-year-old Andover Hall son Atupem attacked from second over with 300 meters to go and got close to Pastore Bob in mid home stretch. It was tight when the horses hit the photo finish and the big upset was a fact since Atupem had the nose first at the wire for driver Santtu Raitala.