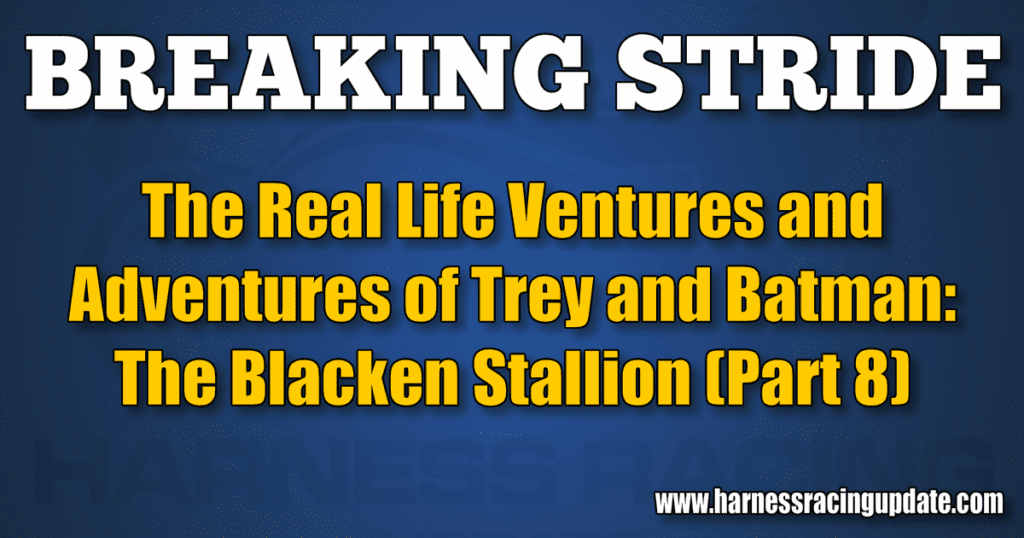 I picked up my passenger at ten in the morning. Instead of my Prius, I was driving a 1956 Chevrolet Bel Air convertible, top-down, mustard yellow, mint condition. The dang thing looked as if I just drove it off the showroom floor to take Peggy Sue Miller to the sock hop. Standing on his farmhouse front porch, he watched me slowly maneuver the gravel driveway of his farmhouse.

“Hey, Trey,” he called, “Did you switch from racing horses to stealing vintage cars?”

I stopped in front of the porch, took off my backward baseball cap, tossed it on the bench seat and explained, “My buddy, Lester J, restores cars with his father, Big Pete. They make some serious cash buying, fixing and selling oldies like this baby. Lester owes me some favors from previous jams. I told him the first day the sun came out and the temperature made 70 degrees, I was gonna borrow this beauty.”

My pal from Silicon Valley, neatly attired in faded jeans and a long-sleeved black t-shirt that showed off a remarkably lean frame for a 50-year-old retiree, climbed in the passenger seat and shut his door with a thump. He stretched his arms to the blue sky like a preacher and yelled, “And finally this day, the weather app says it’s climbing up to almost 80.”

I grabbed the steering wheel, which was the size of a garbage can lid, gunned the engine, and said, “We’re off to meet the next sperm donor for my broodmare.”

Our route would take us 26 miles over two-lane blacktop ribboning through farm country. I held the speed under 30, but between the low grumble from the Bel Air and the whooshing wind, we almost had to shout.

He made a little congo drum tap on the dashboard and smiled, “This is great, totally retro. I feel like I’m in American Graffiti.”

I gave a power salute with my fist, cupped my hand to catch the breeze above the windshield, and shouted back, “Yeah, cross your fingers my broodmare drops the baby with no problems.”

He shouted, “Tell me about this new stallion?”

“His name is Enterprise. When the stallion directory first came out this season, I don’t think he was even listed. I found him in some advertising and thought…whoa, very interesting. He’s out of the Chapter Seven family, a family that is hot stuff these days. The more I looked into him, the more I liked him.”

“Why wasn’t he announced in the first new wave of stallions?”

We stopped at a stop sign for a few seconds so I did not need to shout, “See, you’re curious. This is the idea that I was yakking about last time, writing back-stories. You want to know why the stallion got behind the eight-ball this year and didn’t make the scene until many mares were already booked. So did I. It’s human nature. I called Dublin Farms and asked a guy named Joe, who works there.”

“Sure, he said they wanted to try to find a son of Chapter Seven. Enterprise came on their radar late. The owners were from Sweden. After a fine 3-year-old racing season in America, they took him to Sweden to race as an aged horse. He was overseas and that was one of the reasons he came out late.”

He nodded while I kept shouting the story.

“Initially, the negotiations were slow because they were not marketing the horse, but Dublin Farms had someone who is connected with European racing ask about Enterprise. Because of his 3-year-old success and his dam’s strong family, Dublin was interested. So, the person reached out to the people from Sweden to see if the horse could be bought. It was a long process of back and forth in negotiations, quarantine over there, and then five weeks of quarantine over here. Joe said they had to check out fertility testing, and other stuff. And since he arrived late, they had to hustle to get the word out about him.”

He said, “But eventually he made it; interesting story.”

“I told you, and you know what else is interesting? A horse I never heard of goes into the stallion marketplace, a horse that is from Europe, and he winds up on a farm 15 minutes from the farm where I keep my broodmare. Things like that, and my kinky preference for a dash of international flair, weird things, can change everything in the career of a broodmare or an owner. To me, that’s sort of karma.”

He shouted, “I’m still not sure why we are making a house call to Enterprise. What are you going to do, whisper in his ear, count his legs, feed him carrots, and do a mystic chant?”

“All of the above. Hey, I’m a people person, an animal person. Meeting the farm folks, traveling around, going to races, it’s all part of the package. The game has ambiance, dude. It ain’t just sitting in an office writing computer code.”

“I think so. He checks all my boxes — not a big name, at least not yet, new to the scene, nice family tree. I really think a yearling from this horse will sell, the connections seem nice… and amazingly, he is standing around the corner. I could visit mother and father on the same day.”

We rumbled down the country road in silence for a minute, and then he asked, “If this all works out for you, and about a year from now you get a baby colt, are you really going to name the baby Beau Blacken, after the ballplayer?”

“Absolutely, write it down – Beau Blacken if it’s a colt and Blacken Beauty if it’s a filly.

He smiled and pointed, “I see the sign for the farm. Nice place.”

I wheeled the mustard colored behemoth down a long driveway and held up my fist for a bump.

He banged my knuckles and I said, “Who said you can’t choose your family.”