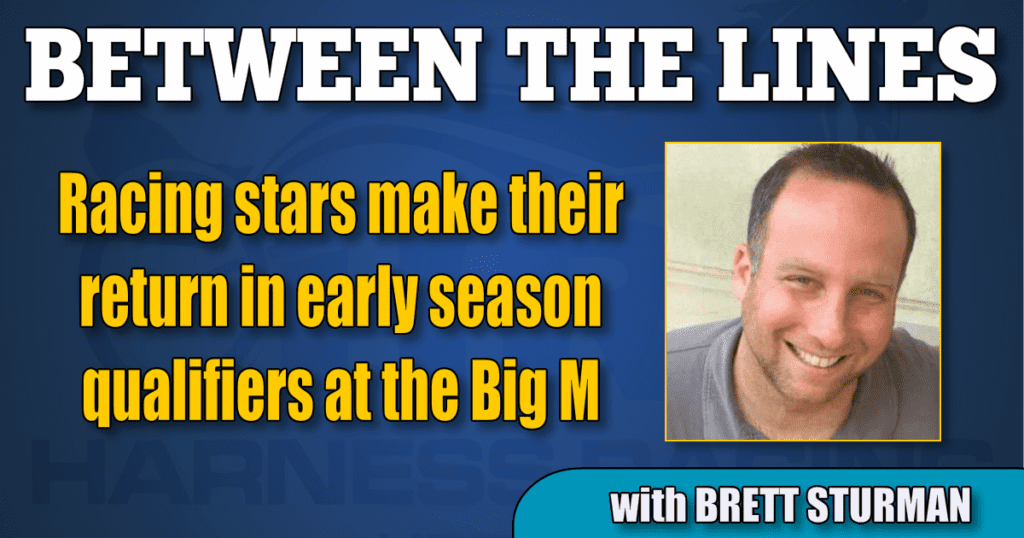 One of the best racing cards of the year to date occurs Saturday at the Meadowlands – but in the qualifiers. Almost all 12 of the scheduled morning races features notable names that raced at the highest of levels in their divisions last year. Most of these horses will likely qualify again prior to racing with purse money on the line, though the initial qualifiers can still provide insight as to how horses have progressed from age 2 to age 3, and from how last year’s 3-year-olds may have improved enough to now take on older horses. Here’s what to watch for.

Of the divisional champions that are in action, we’ll start with the one that last year became the fastest freshman pacer (regardless of gender) in the history of the sport. Coming from the first crop of sire Sweet Lou, Warrawee Ubeaut established the new speed mark with a 1:48:3 win in an International Stallion Stakes division last October at the Red Mile. She followed up that performance two races later with a convincing Breeders Crown win to seal divisional honors, and now qualifies since last racing in the Three Diamonds at the end of November.

Warrawee Ubeaut will be joined in her Race 7 qualifier by Ron Burke stablemates Sweet Chrome and She’s Allright; the latter of which earned over $120,000 last season with a 1:52:2 mark taken in a PA Keystone Classic division. Also in the qualifier is another 6-figure freshman earner, Stonebridge Soul. I wouldn’t expect Warrawee Ubeaut to be close to fully cranked up for this qualifier, though she should be expected to win handily if desired to.

The two ended up being upset by beneficiary of the pace duel, Percy Blue Chip who lands in the same qualifier. This qualifier won’t come close to those level of fireworks that these horses provided last year, but still could nonetheless give a hint as to which mare may have the upper hand going into the new season. Another one of the better fillies from last year, Baron Remy, qualifies too, giving Burke three of the seven mares in the race.

Last year included arguably the best crop of 3-year-old filly trotters ever, and the first one to qualify back from that elite group is Plunge Blue Chip. She beat Atlanta and Manchego in the Kentucky Futurity elimination en route to her record 1:49:4 mark and was a factor all year in that group. Racing against older trotters though can be an entirely different story however, and it’ll be interesting to see how she’s progressed for Svanstedt.

Plunge Blue Chip will qualify against all males, and older ones at that. Ake Svanstedt also has the 5-year-old Yes Mickey whose is a near $600,000 career earner, but a couple of others in here are even better than that. Top Flight Angel trained by Julie Miller was runner-up in the Breeders Crown last year to Homicide Hunter, and Cruzado Dela Noche surprised last fall in winning the Yonkers International. It wouldn’t be fair to judge Plunge Blue Chip based on advanced rivals that she’ll never have to race against anyway, but it could still serve as a beneficial prep.

The final qualifying race of the morning is a who’s-who of some of the Grand Circuit 3-year-olds from last year. The 3-year-old divisional champion Dorsoduro Hanover returns and the $1.2 million dollar earning from last season draws post 10 – the same post he almost overcame as a huge longshot in last year’s Meadowlands Pace. The other big name in the qualifier is Thinkbig Dreambig. The $500,000 earner as a 3-year-old was trained in that season by Jimmy Takter but upon his retirement will now be trained by daughter Nancy Johansson. The race also includes newly turned 4-year-olds such as This Is The Plan and Done Well, as well as hard hitting older horses Filibuster Hanover and Dealt A Winner.

Scattered throughout the remaining Meadowlands qualifiers are other names that were right there near the top of their divisions in 2018, and could step up to the very top this year. In qualifying race order, Sonnet Grace (Race 1) was a 2-year-old trotting filly last year that showed great improvement when moving to Burke towards the end of the season. She just missed in the Matron to a top filly in When Doves Cry and then closed out her season by winning the Goldsmith Maid.

St Somewhere and Sylph Hanover (Race 8) are two Burke trainees that both earned good money last year at 2 at over $500,000 combined and could be players in the 3-year-old filly pacing division this year. Semi Tough (Race 10) is another Burke 3-year-old pacer, though on the colt side and he earned nearly $300,000 last year despite only winning once in 12 tries (finishing second in 6 of those races didn’t hurt though). Also in the 3-year-old glamour division races Blood Money (Race 11). He’s another that goes from Takter to Johansson and will become barn mate of another top one, Captain Crunch.

Not to be overlooked, last year’s Meadowlands Pace winner and Little Brown Jug winner Courtly Choice came back out and qualified Thursday at Woodbine Mohawk. The now 4-year-old won his seasonal debut qualifier in 1:53 with a last quarter in :26.4 following a strong second quarter move to the front.

The races for these horses might not be real at this point but one thing is for sure – the sports stars are back and this is only the beginning of what is guaranteed to be another exciting season.