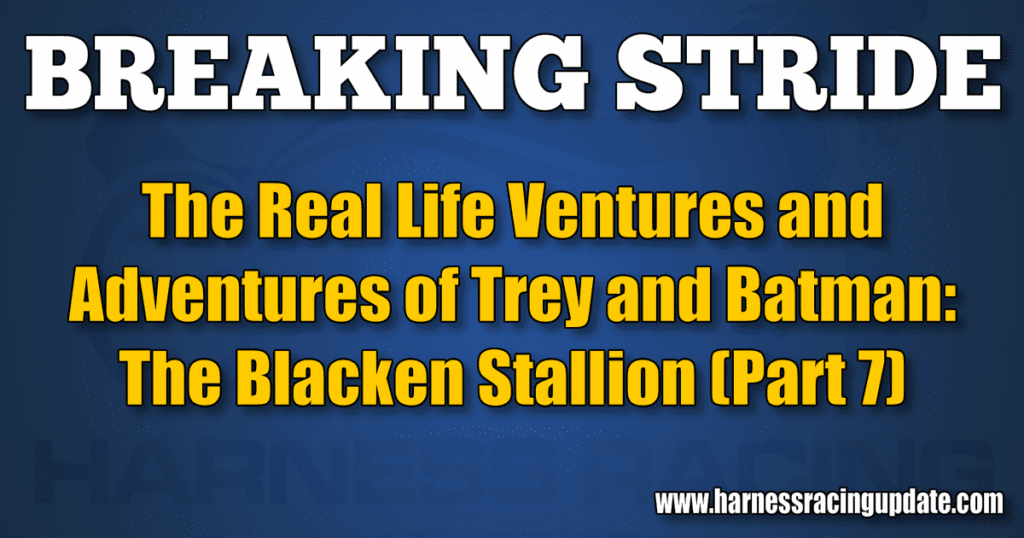 Tuesday at 4:30 in the afternoon found us standing three deep in the checkout line of a bouquet wine shop named Planet of the Grapes. My pal held a black bottle to take to his sister’s house for dinner. The name of the wine was something like Casino Royale de la Chateau 1983. The sticker price was $66. For that price, I could snag a case of my vintage at Costco and still have enough left to eat take-out burritos for a week.

A tall woman of middling age, her blonde-gray hair pulled into a ponytail fastened with a pink rubber band, stood in front of us. Her erect posture, yellow vest, and black stretch pants made her look looked like she was heading for Paris to protest.

During this awkward ‘standing in line with strangers’ interlude, I whispered to Batman, “I’ve been playing around with three for a few months and have finally decided who I’m breeding to.”

I noticed the woman in front of us twitched her ponytail like a Golden Retriever that just picked up the scent of a rabbit.

Taking a step sideways so she could see me, I explained, “Racehorses, breeding racehorses.”

She gave us a quick, thin-lipped smile and scurried to take her turn at the checkout.

I dropped the whisper and said to my pal, “Betting on horses or picking a stallion, if you just give me enough time and data, I’ll concoct a case for a camel.”

He kept smiling, “We had a poster on the wall of a meeting pod in Silicon Valley — TORTURE THE DATA, AND IT WILL CONFESS TO ANYTHING.”

I gave him a thumbs up, “Another tattoo to consider.”

“So now you are down to Whataworkout and Enterprise for stallions.”

“Whataworkout ain’t gonna work out. New York has this residency rule. I like to visit my broodmare and don’t want to have to move her to New York.”

“Yeah, but looking up Whataworkout gave me a great business idea.”

He looked at me and tilted his head.

He stepped forward and slid his card in the reader while the clerk slipped the bottle into a brown paper bag.

As we walked toward the parking lot, I began to explain, “Whataworkout had the whole package. He sold as a yearling for $155,000. Based on his looks and pedigree, he was worth the money.”

We ducked into my Prius and he asked. “And?”

“Whataworkout did not race until September of his 2YO season. This was painful to discover on a personal level. In his debut, he went off at 48-1. Two-year-old trotters are my favorite type of wagering race. I never pass one up. They are wildly unpredictable and can resemble demolition derbies. If I had been trolling the betting sites on that afternoon, I would have been all over him.”

“Yeah. There was carnage during the race, but he just minded his business and trotted home in a leg of a series called the Kindergarten Classic. The title is impressive, but the purse was a mere $10,000. In his first season, he made six starts and banked $30,890. In my world of owning racehorses, that is a fine first season. In the world of future stallions, unless he races fantastic at age three, that will not abide.”

“One of the cool things about the computer is that you can pull up the races and watch the entire career of a racehorse. I did this for Whataworkout. Two things struck my mind — Scott Zeron, his regular driver, is very good and this young horse looked promising. The future looked bright going into his 3YO season.”

“Watching him race at three was not much fun. He didn’t step back on the track until late October. He had two promising starts, a first and a second worth $7,625.00, and then the trail goes cold.”

“What happened?” He asked.

I just shrugged. “He raced seven times as a 4YO and just did okay. For some reason or reasons, he didn’t pan out. He took his record at 4; that is like being a rock star that has a minor hit at age 61.”

He said, “Hey, I’m sure it happens. Horses get hurt, horses mature late, and horses get sick.”

I nodded, “This is where my new business idea comes in. One of the things you cannot see is what happened. But something did happen, probably illness or injury.” Getting amped up I asked him, “Do you remember me talking about Beau Blacken?”

I stopped him, “You’re like a human Siri.” In a kindergarten teacher voice, I continued, “There was another player on the team, a very good lefty starter, tall kid; I think his name was Seth Toliver, or maybe Tomlinson. Anyway, one day on a long bus ride, I asked the manager of the Paints why he hired Seth out of a tryout camp since his stats and his data were very weak.”

The manager leaned back and said, “I knew his story. My cousin is an assistant coach at the University of Wisconsin. Like every kid in pro baseball, Seth was a top dog in High School. He started out great in college, but in his sophomore year, he cut his index finger on a beer bottle breaking up a fight. He couldn’t spin his breaking ball that season.”

He went on, “Seth got an invite to the Cape Cod Wooden Bat League in his junior year, where top talent players strut their stuff in front of major league scouts. Seth got rocked in his first start, turns out he had mono and was sent home. Then when he was training down for his senior year, he blew out his shoulder and needed Tommy John surgery. When I saw he was on the tryout list and that he was from the University of Wisconsin, I called my cousin.

My friend removed the wine from the paper bag and began to scratch the price sticker off the bottle. He put the clues together and said, “So you think a business model for horse breeding would be to tell backstories on stallions, give a more complete picture and not just the hard data?”

“Exactly. Every person and every horse have both quantifiable numbers and a story. I can find a ton of information on a horse like Whataworkout, but as an outsider, I don’t have a clue about the story behind those cold facts. What if Whataworkout is like Seth. What if there are reasons for the crummy numbers. What were the twists and turns? Maybe the horse was training unbelievably great in Florida until a feed rack fell on his head and gave him vertigo. A thousand things might have affected his performance.”

“Racing is a bottom-line business,” he said.

“True, but the bottom line doesn’t need to be the only line.”

I gathered my thoughts and explained, “I found the stallions I am looking at in advertisements. I saw Whataworkout in an ad on HRU. My first move was to click on the ad and then click on his family and data. Why stop there? This is 2019, why not another click to his story? Linking can be energizing, amusing and entertaining for potential customers, and it is FREE.”

My motor was revving, “Let’s say I’m looking at Whataworkout in HRU. A link with more backstory could give additional information that increases his marketability at zero cost. This would particularly be the case to those of us who like stories more than just pictures and numbers.”

He gave a headshake of approval, “Not bad.”

“Don’t get carried away.”

He said, “Well, the clock is ticking back here on planet earth. The process of elimination says that you‘re heading to Enterprise as your stallion of choice. What’s his story?”