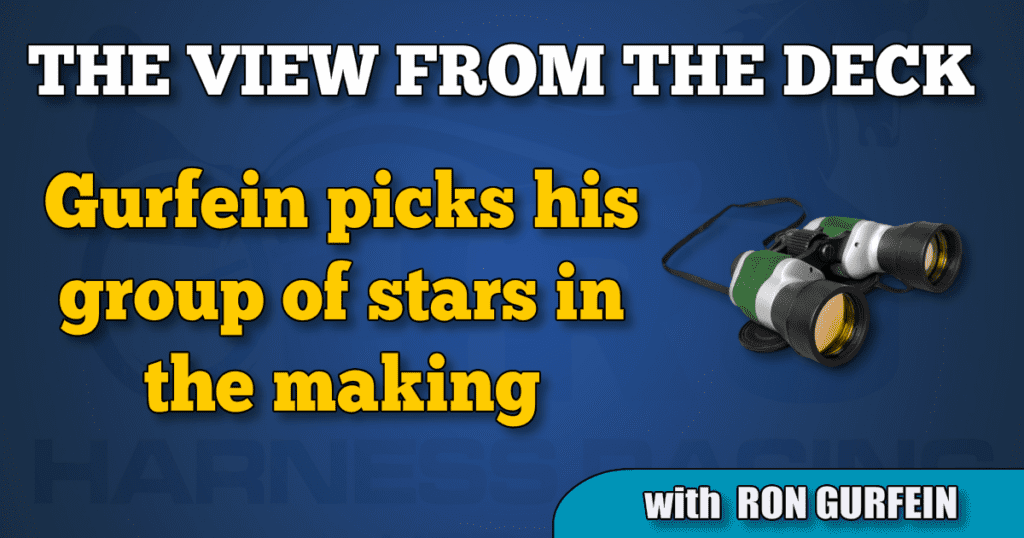 Picking my group of stars in the making

Jovial Jerry, Explosivebreakaway, She Does Trix and Chief Mate were all ultra-impressive this week at Sunshine Meadows.

Beautiful weather, great horses and lower than usual attendance Saturday at Sunshine Meadows made this reporter a happy man.

Before I get to the more mundane writing, I want to make note of a few horses that appear to be rising to the upper echelon of the training ranks. The next three months will separate the men from the boys and as the speed intensifies I see the emergence of stars in the making. The following in no particular order impressed me a lot this weekend:

Rick Zeron has a Donato Hanover colt from the good mare Mets Inn called Jovial Jerry. The colt is a brother to Andy and Julie Miller’s top colt of 2018 Mets Hall and looks every bit the part. I didn’t time him, but with one as good as he is, one doesn’t need a watch. The Zerons train in large sets and he just stands out — great gaited and glides over the ground. I realize the naysayers will put forth “what are you going to do with a Donato against the Muscle Hill and Chapter Sevens?” He will be early and he will be a force to be reckoned with, you heard it here first.

Freddy Grant’s barn displayed a relatively green 3-year-old that is very fast. Explosivebreakaway, a full brother to Phaetosive, trained a brilliant mile in 2:01.2 last quarter :27.3 with Frode Fladen in the bike. No easy task for a green colt at Sunshine Meadows.

She Does Trix a Trixton from the great La Rivera Lindy impressed me with no head check and her ears on line with her withers she looked strong as can be in a relatively pedestrian time as she had OCD surgery in December. She is from the Lindy Farms, Domenico Cecere the trainer.

Chief Mate was my last standout performer of the weekend cutting a mile in 2:15.2 with Tony Alagna at the reigns. He was a $150,000 colt by Captaintreacherous from Heaven Forbid.

I am sure if you were there I left a standout of your choice among the missing. Don’t be dismayed, the cream always rises to the top and if your pick is great he will surface in my notes eventually.

Believe it or not, the Alagna Barn had 21 sets Saturday morning beginning at 6:30 a.m. and ending at 4:30 p.m. He still had three hours of training left when I began writing this piece. No one can accuse Alagna of lacking dedication and in between sets he took time to train a newly-acquired 3-year-old Kadabra homebred for Ron Ruggles named Donna Fugata in 2:03 last half in a minute. Nice looking filly. In the same set as Chief Mate, all timed around 2:15.2, were Force N Fury (c Captaintreacherous—My Little Dragon), It’s Showtime (c Captaintreacherous—Uffizi Hanover), Ideal Perception (c American Ideal—Southwind Siren) and Rollnthejoe (c Roll With Joe—Sweet Bonnie). Choirmaster (c Mach Three—Ideal Helen) looked sharp stopping the timer in 2:14.3 with Donna Lee at the lines on the wire together with What the Luck (c Artspeak—Calvados Hall), Major Risky (c Captaintreacherous—Flyonce), Captain Barbarossa (c Captaintreacherous—Swinging Beauty), and Hopefully Inclined (c Mach Three—Artistically Inclined).

Jan Johnson has some sharp lookers coming on. I took note of a pair of fine fillies, An Ocean Away (Yankee Glide—Oasis Dream) and Context (Father Patrick—Glide Power) looked ready to qualify trotting a last half in 1:04. He also trained Hot Springs Volo (f Explosive Matter—Silver Springs) and Higher Call (c Explosive Matter—Bruschette) both very good and quite fast, but I didn’t have the opportunity to time them. With all the traffic on the track at the same time I admit I missed a few.

Lindy Farm and Domenico Cecere had pair of Hambletonian contenders showing off. I caught the very fast Kings County and Lindys Crazy Hall hit the wire together in 2:02, both very sound and well under wraps.

I don’t like to slight Casie Coleman, but as she doesn’t display horse numbers I must wait for a report from her husband, Mark. So this is last week’s report: “Our 3-year-olds trained this week in 2:02 and 2:04. Blank Canvas trained amazing towing Steve Condren around. Our 2-year-olds trained in 2:19/:33.

Thanks for listening. Hopefully I will have an update next week. I plan on adding the Road to the Derby also. There are a few players that appear very interesting. Have a wonderful week.