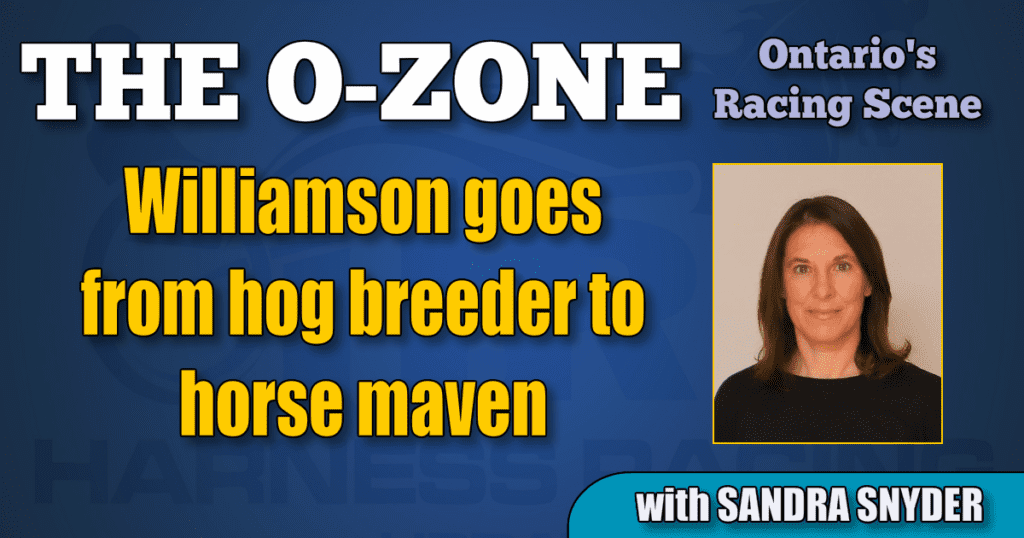 Just as Ontario’s slots program was ending, Jeff Williamson was jumping into the harness industry with both feet and now has 25 broodmares, 50 horses in training and has won the Petticoat Series at Yonkers the last two years with Cousin Mary and Catch An Ace, respectively.

(Editor’s Note: Thanks to the sponsorship of Ontario Racing, this is the first in a weekly column in which veteran Ontario-based racing writer Sandra Snyder will cover the Ontario racing scene for HRU with particular emphasis on smaller tracks and lesser-known people and horses. The column will be published every Friday through the first week of October).

Eight years ago, Jeff Williamson decided he wanted to learn more about harness racing. Not one to do things by halves, the Blyth, ON resident figured the quickest way to expand his knowledge was to buy a horse.

“He told me the price on her, and told me to go out and look at her and I said there’s really no sense in me going to look at her because I don’t know the difference between a pacer and trotter,” said Williamson with a laugh.

The new owner placed Redy La Mar in the care of trainer Jim Kerr and in her second start the Williamson family found themselves in the winner’s circle at The Raceway at Western Fair District in London. The mare would go on to record six more wins and almost $40,000 for the family and served as the spark for an operation that now includes 25 broodmares, more than 50 horses in training and several farms around their southwestern Ontario homestead.

The growth started with Williamson and his wife Becky getting their grooms licenses and soaking up knowledge from Kerr as they pitched in on race nights. While many in the Ontario horse racing industry scaled back their investment when the Slots at Racetracks Program (SARP) was cancelled, within three years the Williamsons were up to 15 horses and looking for a training centre to rent. They found the ideal facilities outside Clinton, ON on the farm of Darrell and Jean Lavis.

“We took a long-term lease on that place, on the track and the buildings and the pastures that were there,” said Williamson, noting that the facility also includes an equine swimming pool. “We’ve got 44 stalls there now — we put some additions on — and we put all new pastures up and resurfaced the track and re-sloped the track.”

The broodmares reside at the couple’s home farm, where their main business is based. A 1,700-head sow barn that produces 50,000 piglets each year, Eataam Pork is named after the couple’s children Evan (19), Alyshia (18), Tyler (16) Amy (14), Allan (11), and Matthew (9). Parker, aged 7, arrived after the name was coined and narrowly escaped being christened Pork by his fun-loving father.

“They enjoy going racing with us, too. We do a lot of stuff together,” said Williamson. “We have fun with it, like foaling out mares now. We’ve got seven kids and the one boy, Tyler, he’s going to be involved with the horse racing I think. He enjoys it.”

At present, Williamson has his “F” license, able to train the horses he and Becky own, but he has plans to acquire his “A” license this summer in hopes of sharing his enthusiasm for the game.

“I’ve got people that want to have small shares in them and be involved a little bit, so once I get my “A” then I can bring some other people in and introduce them,” he said.

In the interest of expanding the fan and knowledge base, Williamson has also been active with the REACH (Regional Equine and Agricultural Centre of Huron) programs offered by the University of Guelph. Students enrolled in the equine programs at the Clinton facility regularly find summer work at the Williamson’s training centre and recent graduate Bailee Inglis joined the operation in the fall as the assistant manager.

“They’ve got more riding horse experience, so when we can get them out there with the racehorses and get them paddocking, it pulls some people into racing,” said Williamson. “I’ll put them on the joggers because that’s how I learned. I go with them a couple times and I get them right involved with it, so it works really well.”

In addition to Inglis, Bob Daer and Mandy Upshall are key members of the Williamson operation. Daer serving as a trainer and manager and Upshall as the secret ingredient to the success the team has enjoyed in the claiming ranks.

“I really, really like claiming sour mares,” said Williamson with a laugh. “Because I can put them with (Upshall) and in two weeks it’s a different horse, just the way she treats them and spends time with them and that. So Long Sugar, she got the (2018) claiming mare of the year award in London, that’s one that Mandy looked after for me.”

In addition to 5-year-old Test Flight mare So Long Sugar, Upshall also worked her magic on Catch An Ace, who captured the March 25 Petticoat Series Final at Yonkers Raceway.
“Me and Mandy and my wife Becky went down to Yonkers actually to see her race in the final and we enjoyed that,” said Williamson. “I told Mandy — she didn’t really want to send her down to the States, because she wasn’t going to be able to see her — and I said, ‘Well if we get into the final of the Petticoat I’ll take you down.’ So it worked out well.”

Catch An Ace was placed in the care of Andrew Harris for her stateside campaign and both owner and trainer are hoping the 4-year-old Bettors Delight daughter can follow in the footsteps of stablemate Cousin Mary. In 2017, Williamson sent Cousin Mary to Harris for the Petticoat and the Camluck daughter not only dominated that series, but also swept the Bobby Weiss Series at Pocono Downs, ringing up eight straight wins.

Williamson credits driver J Harris, Andrew’s twin brother, with much of Catch An Ace’s recent success. It was a suggestion the driver made, and the encouragement to keep looking for an answer, that helped Williamson and his veterinary team pinpoint a nagging ache that plagued Catch An Ace last summer.

While much of Williamson’s past success has come from claimers and horses he felt would benefit from turn out or swimming, in the next few years he is hoping to develop some stakes and preferred level horses from the 30-odd 2-year-olds he and his staff are currently training.

“Last year we had 14 homebreds and I think I bought 18, a bunch out of the London sale and then I bought a bunch privately, just to try different studs,” said Williamson. “All my mares, I breed all Ontario, because I like the program with the Ontario Sires Stakes. Even when I’m buying horses I try to buy Ontario horses, because of the allowance that they allow us.”

While Williamson does most of his racing at The Raceway at Western Fair District through the winter and Clinton, Hanover and Grand River Raceways in the summer, he is hoping to make a few more starts at Woodbine Mohawk Park this season with his young horses.

“London is one of our favorite tracks. The paddock is really good there, it’s only an hour and 15 from the farm, and it’s where we started,” he said. “We are getting some horses to go to Mohawk and hopefully we’ll develop some more horses to compete down there. We’re hoping this year we’ll be down there in Mohawk more than we have been.”

In addition to more trips to Woodbine Mohawk Park, the Williamsons will be busy with an expansion to their pig barn this summer. Once that is complete, the horseman will have time to turn his energy and enthusiasm toward the growth of his broodmare band or a foray to Florida with a few yearlings, either path certain to burnish the enthusiasm Williamson has found for harness racing.