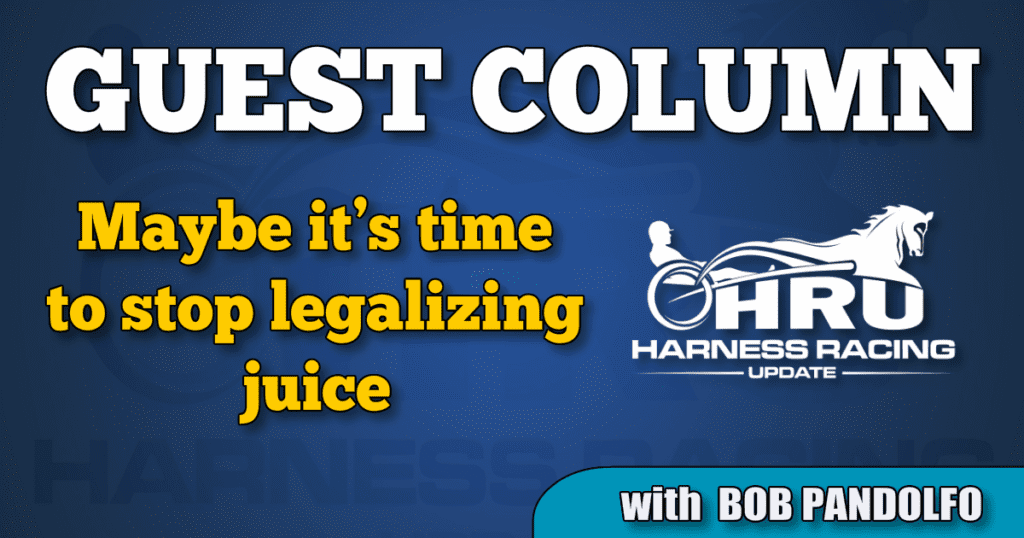 This week, the Stronach Group announced that all race-day medication, including Lasix, would no longer be permitted at two of its thoroughbred race tracks, Golden Gate and Santa Anita.

So I ask the question: should harness racing ban race-day meds? Harness racing legalized race-day Lasix years ago following the legalization of the drug by the thoroughbred industry. This is in North America alone. Horses don’t race on Lasix in Europe, Asia, or anywhere else, for that matter.

I think we can make a case that Lasix has not been good for harness racing. Here’s my argument against it:

Admittedly, I tend to look at things simply. And I know that when harness racing in North America was much more popular than it is now, the horses weren’t racing on Lasix. And there was no shortage of horses. In countries where harness racing is still very popular, they don’t use Lasix. Sweden has 33 harness tracks.

In many harness races, every horse in the race is on Lasix. Perception does matter, and this doesn’t look good to the public. Everyone knows that most horses don’t need Lasix in order to compete. If they did, then how did we get by without it for so many years? And how do they have so many horses racing without Lasix in Europe, Asia, and Australia? If you gauge the popularity of horse racing by wagering, the amount of money wagered on thoroughbred races in Hong Kong and Japan is enormous. No Lasix. The biggest betting pools in harness racing are in Sweden. No Lasix.

There’s also a common belief that Lasix can be used to mask other drugs. Some people tell me that this simply isn’t true. But, in the past, some Olympic athletes who were caught doping admitted that they used Lasix to mask other performance enhancing drugs. The World Anti-Doping Agency (WADA), which was founded by the International Olympic Committee, is very clear about the use of diuretics, which includes Lasix. They consider all diuretics to be potential masking agents, and therefore, these drugs are prohibited.

And everyone knows that drugs have side effects, especially with long-term use. Remember, if a horse races 40 times this year, and 30 times next year, that’s 70 injections of Lasix in two years. If you watch TV, you’ve surely seen the commercials for drugs and the long disclaimer that comes at the end of the ad where the announcer tells you that although this drug may help something or another, it may also destroy your health. Some studies have shown that a side effect of Lasix is bone loss. Is that why our horses don’t race as many starts as they did years ago? Do we want to show the public that we’re giving our horses a drug that most of them don’t need, might hurt their health, might be used to mask illegal drugs, but, may make them go a little faster? Is that the face we want to put on our sport?