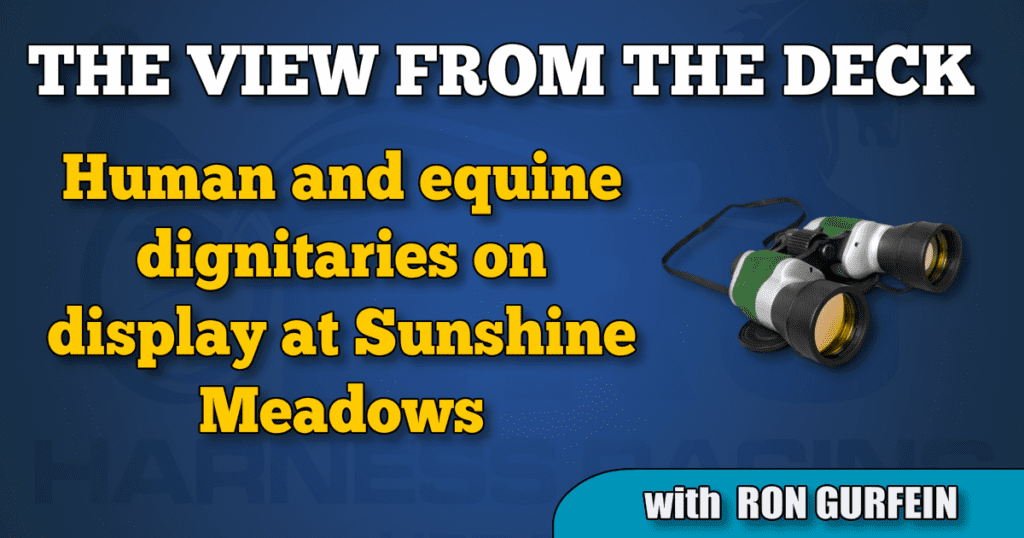 Human and equine dignitaries on display at Sunshine Meadows

The Society for the Promotion of the Standardbred Horse In North America is alive and well and convened in south Florida at Sunshine Meadows Saturday morning. Notables from far and wide came to share breakfast and small talk as well as unlimited bottles of champagne. The breakfast was a combined effort of HRU, Myron and Stephanie Bell, Frank “The elder” Antonacci, and Murray Brown.

I will not bother to mention the usual suspects but there were however many new faces in attendance, they included: Big Al, Marvin Katz, the famed Breeders’ Cup president Fred Hertrich, Anthony Peretti, who gave me the great news that he and his partner are on the right track to purchase the working part of Peretti Farm and market yearlings once again. He is a wonderful man and I wish him well. Dr. John Egloff of Vieux Carre Farm was here with his son, Jay, Dave Briggs was running all around gathering subjects for the HRU live feed interviews with the amazing Heather Vitale.

A rare George Segal sighting occurred and we discussed the horrible news involving the college admission scandal. Linda Toscano was here looking more like the Linda of 1975. I met a very nice guy, Joe Di Scalla, owner of a restaurant in Katonah, NY north of Yonkers that has a very horsey clientele and from the way he explained the making of Broccoli Rabe and described some other dishes I know the food is great.  John Campbell and I had a very nice discussion on the pros and cons of a two-heat Hambletonian that I found very enlightening. I will discuss it in detail in my Friday column. Two old training buddies were in attendance — John McDermott and Carl Garafolo, as well as Eric Cherry and his lovely bride Lisa. I met the very pretty young wife of David Reid, Jeanette, for the first time and she had the pleasure of taking a ride on a jog cart built for two. Other faces not often seen were: Mike Saunders, recently-retired Jim Simpson, Ebby Gerry, Marty Sternberg and Charlie Keller.

My training reports were throughout the week and I will start by thanking Mark Herlihy for his help with his and Casie Coleman’s barn. This was from last week and today. Indictable Hanover (c Bettors Delight—I’m Sassy), Golden Sand (c Somebeachsomewhere—Canne Cammie) and Examiner Hanover (c, He’s Watching—EZ Rock) all went a mile in 2:28/:35 and were all strong to the wire. Sam McKee Hanover (c Sportswriter—Sammy’s Magic Girl), Better Focus (c Bettors Delight—Royal Distraction) and Aces Rock (c Bettors Delight—Double Jeopardy) went 2:28/:35 with Sam McKee finishing three wide and strong.

Saturday, they trained two sets both in 2:24. All were good, but outstanding was Play Lady Play (f Shadow Play—Fancy Lady) who finished the mile four-wide with no urging and Golden Sand (see above) a half-brother to Alexis Faith driven by Ray Domminico.

Earlier in the week, I had the privilege of training with Frank M. Antonacci and Domenico Cecere and most of the Lindy Farms contingent. All the 3-year-olds trained around 2:10. Kings County, Throw Out The Tab, Union Forces, and Magic Joe Lindy were exceptional.

For the 2-year-olds, I personally trained three that were all better than good. Dazzling Lindy (c Crazed—Lindy On The Rocks) may be the best Crazed ever, Pastor Lindy (c Father Patrick—Lindys Crazy Dolly) is a very fast, sound, good-gaited colt and Lifestory Hanover (f Somebeachsomewhere—Livin Life) a very talented pacing filly I really loved. She seemed to have endless gears as I nosed out a very good filly in Truth Hanover a (Western Ideal—The Art Museum). The unnamed filly by Muscle Hill from the great Moms Millionaire looks like a champion in the making.

The top set of the day went to the Alagna barn that included three of the top prospects for 3-year-old pacing colt in 2019. This group that paced easily a mile in 2:05 included my favorite Captain Ahab, a much improved Shipshape, along with Captain Trevor, Odds On Palm Beach and Odds On Cape Coral.

I noticed the only two 2-year-old trotters in the Alagna barn are both fillies and showing well: Confidante a Brittany homebred by Father Patrick from Anywhere With You and Ramona Hill, a Muscle Hill from Lock Down Lindy.

There is no question that in this writer’s mind the amount of equine talent at Sunshine Meadows this year is overwhelming. The next three months will separate the men from the boys, but very few look disappointing as of this writing.

I look forward to writing about the discussion I had with John Campbell for next week’s column. In the meantime, I hope you all have a wonderful St Patrick’s Day.