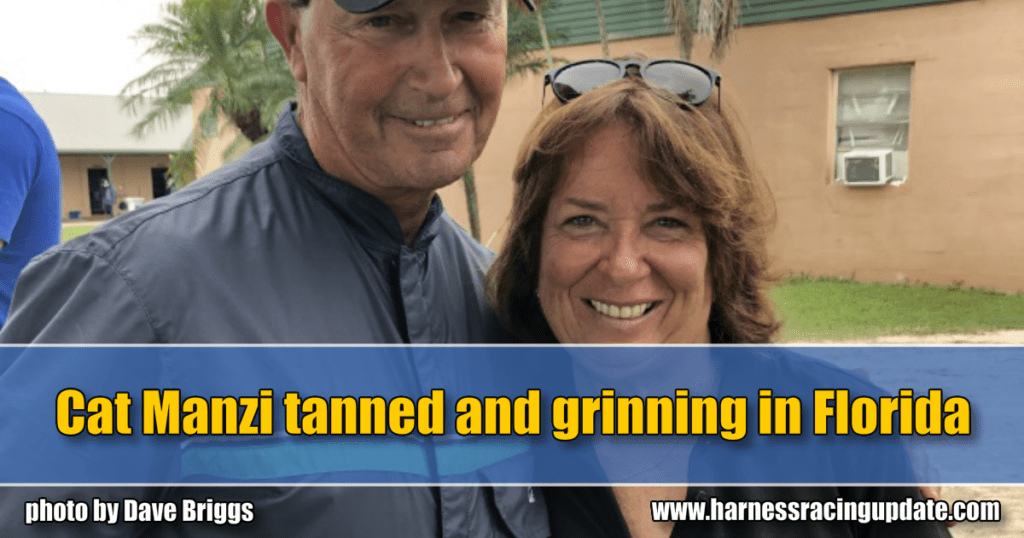 The Hall of Fame driver is spending his first winter in Florida working for trainer Tony Alagna — and loving it.

Despite a Hall of Fame driving career that features 14,812 wins from a whopping 95,690 starts, Cat Manzi said he’s, “never, ever, had a chance to be around horses like this.”

Tanned and grinning, Manzi points to the shedrow behind him at Sunshine Meadows in Florida where he has spent the winter working for trainer Tony Alagna.

“One after another, every one better than the next. It’s a lot of fun,” Manzi said.

Manzi has worked for Alagna since last April, but has been in Florida with the crew since the first week of January 2019. It’s a major departure for the man that made his career through numerous cold winters in the U.S. northeast.

“This is the first winter that I’ve spent this much time (in Florida), for sure. I’ve never worked here. I’ve always stayed north and drove all winter,” said Manzi, who was inducted into the Harness Racing Hall of Fame in 2002.

Manzi retired from driving in 2014, but last year approached Alagna about working for him after watching the trainer talk about his operation on video.

“I got in touch with Tony. I liked the sound of the way he does things, because a lot of it sounds like the way I grew up with horses,” Manzi said. “It was a chance to be around a lot of well-bred horses, which I hadn’t… when I was training horses, they weren’t like these back in the old days… I’m having a good time.

“Tony is a hands-on trainer. I don’t have to do anything except tell him what I see or don’t see and he takes it from there. It’s more of a learning experience for me coming down here. Of course, I can handle horses and I know them and I’m pretty sure I can point them in the right direction, but he doesn’t really need that because he’s a terrific horseman.

“As far as being able to tell how they will be next week or the week after, I don’t think it’s very easy. They change. Some of them get better, some don’t. I’m just happy to be able to do this, to have something that I can do every day that I like.”