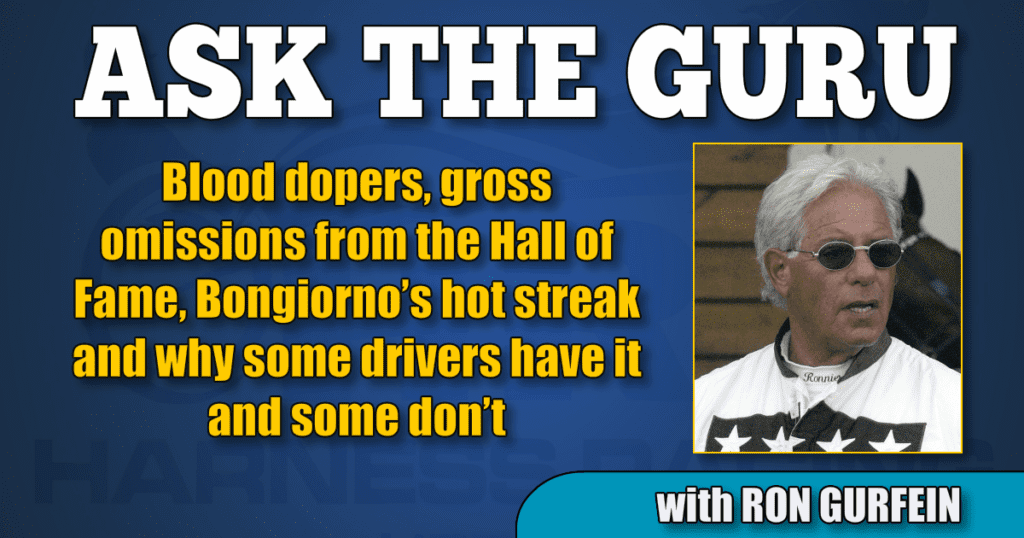 Thoughts on: blood dopers, gross omissions from the Hall of Fame, Jennifer Bongiorno’s hot streak and why some drivers have it and some don’t

Tidbits: My two pet peeves of recent time are blood doping and the Hall of Fame nominees. I will take a moment of your time to editorialize.

Any time financial security is predicated on the winning or losing of an event there is bound to be people that push the envelope. It’s not just indigenous to harness racing, it rears its ugly head in all sports. There have been major controversies in football, baseball, basketball, and cycling on the professional level and in the college ranks. This is a problem that no matter what we do will never go away. Our object should be to contain it.

To me spending money we need to test for lower class drugs is a waste of time. We need to concentrate on blood doping only, not only do the blood dopers enhance the animal to a ridiculous level, they also severely endanger the lives of the horses. We have lost more horses to coagulated blood than you can imagine. Somewhere out there is a test for EPO that doesn’t have a 24-hour window. Let’s find it.

Why we waste our time and money on tests for Bute, Banamine, Lasix, steroids, and Clenbuterol are beyond me. They all help horses and have many positive effects.

I go back a long time in this sport and I refuse to name names, but I sincerely doubt that any Hall of Famer did not use steroids in the ‘50s and ‘60s when they were legal.

It’s actually unfair to take them away from horseman today. What percentage of our major races are won but horses that have had their red blood cells increased? This would make a great study.

Every horse in every big stable has blood work done at the beginning of the year as a base line. Let’s have the blood count registered with a lab by Jan 30. Then as general procedure, let’s say after every major race we automatically do a blood count on the winner. Then get the results to a formidable veterinary clinic for appraisal. No punishment involved, merely a study to see how prevalent the use of oxygen enhancement has occurred. We can then use the findings moving forward to scrutinize the enhancers more closely.

I appreciate the efforts of WEG and the Gural organization for trying to level the playing field, but I fear that although their intentions are noble the results of their “due process” may endanger the livelihood of innocent horseman. I have been victim myself of impossible positive tests and been made aware of many others. Zero tolerance should never be administered until zero errors are achieved.

Any time someone is extremely successful in our sport, immediately they are accused of cheating. I am sure that this would turn out to be true in some cases, but I am certain it’s not true in most cases. There is a big difference in out and out cheating (i.e. using illegal drugs, and pushing the envelope) vs. doing everything and anything permissible to make a horse be his absolute best. I get beaten up daily by nasty mail accusing me of being on the side of the bad guys. This could not be further from the truth. When the problem is as serious as some have been saying lately I don’t want to see any individual’s life ruined because of suspicion. People have actually warned me that I shouldn’t take the side of a person in trouble because it will come back to haunt me. Lots of things have come back to haunt me, but I still will freely deliver my opinion. Please don’t all jump on the bandwagon to bury a trainer because of what you heard or what you think. React to facts and facts alone, mob rule doesn’t work properly, nor has it ever.

To me there has always been something drastically wrong with the selection process for Hall Of Fame induction. The committee had gone for two decades with just a few trainers selected. Bob McIntosh, Chuck Sylvester and myself were the only inductees for years. In fact, there are more trainers selected this year than in the previous 20 years. What is wrong with this picture? First it’s difficult, then come one come all. I have written before how I feel about diluting the enjoyment by increasing the numbers to such a degree so I will let that discussion rest. But I would like to make a case for two horsemen that have been severely over looked.

How can a trainer that won the Hambletonian three times as well as every other race in the trotting world not be in the Hall? Per Eriksson has done it all and since he and his wife Tina and their children have returned to Sweden the selection committee has ignored his achievements. Bill Popfinger is still training and sometimes driving horses at age 83. He had a major Grand Circuit stable for years and trained multiple world champions both trotters and pacers. From my sources I understand he has been nominated many times. Who could vote against him?

It’s times like these I truly hope “the pen is mightier than the sword.”

I can add many names to this list, but don’t want to sound like a polyana. I selected these two because of the length of time between their fabulous achievements and today where they have not been recognized. There are two others that I neglected to discuss because of my close relationship with one and couldn’t write about one without the other. I will however give the selections committee a hint: They both saved great racetracks from extinction.

Dave Briggs forwarded this question on to me. It was signed simply Jack: So I ask the Guru for his opinion, if he is in a position to be brave and comment, how do you explain the form reversal on all of Jennifer Bongiorno‘s horses last weekend? By the way, she went 8-for-9 on the week.

Sorry to disappoint you with my answer, but if you are a student of the sport you will find that the good stables that race in the winter in the north have a distinct advantage over the little guys that fill most of the races. I looked at the results and to begin with there is no form reversal when the winners are all 4-1 or shorter. They were all favorites or close to favorites. Many were dropping in class one went from nw8500 to nw5000. She races her horses where they belong, something many trainers have yet to learn. She has a major horse racing pedigree on both her dad’s and mom’s side. To be that hot there is luck involved, but training horses can be streaky just like any sport. Most of the winners were at Yonkers and all had inside posts so their chances of winning were even greater. I don’t believe Jennifer has ever had a positive test in her short career. Find another subject for your conspiracy theory.

Frank Black asks: I am confused by the two best drivers at Northfield — Wrenn and Merriman. Horses they jump on go right to the front without any trouble, but previous lines show the horse can’t leave a lick. I know it’s talent, but what are they doing different?

Basically, if I knew the answer I would be in the Hall of Fame as a driver. Some have it, some don’t. I have had horses of my own that couldn’t leave a step, yet one day Yannick Gingras sent a filly of mine to the top from the 9 hole at Pocono. I was shocked. These great talents have live hands, I have been told that some drivers instil fear in a horse (how, I have no idea) and that’s how they get them to leave. Some drivers are more likely to get a horse out of the gate than others. One of the very best was Carmine Abbatiello. There were many stories about a trainer telling him please don’t try to put him on the front end because he will get parked. Then right to the top he went. Another factor to take into account is the intimidation factor. At Northfield, guys like Wrenn and Merriman drive every race and some young pup will not park them for fear of reprisal. Stanley Dancer was the first “modern day” driver to use the front end to his advantage, followed by many that made a living on the engine. Little guys like Walter Case and Marvin Maker won huge percentage of their races on the front, with no intimidation, they were just that good. In more modern times, Mike Lachance owned the front wherever he drove. Of all the races he won for me 75 per cent were on the front end. Lucien Fontaine, and Ben Webster both followed in Dancer’s footsteps. I could go on and on but one interesting point is that three very great finesse type jocks — John Campbell, Bill O’Donnell and Buddy Gilmour were far less likely to seek the top than the pocket.

Thanks for many kind letters. Please keep the questions coming in. I had the pleasure to train some Lindy Farms 3-year-olds this week in 2:10. Summer is on the way, stay tuned and have a great week.