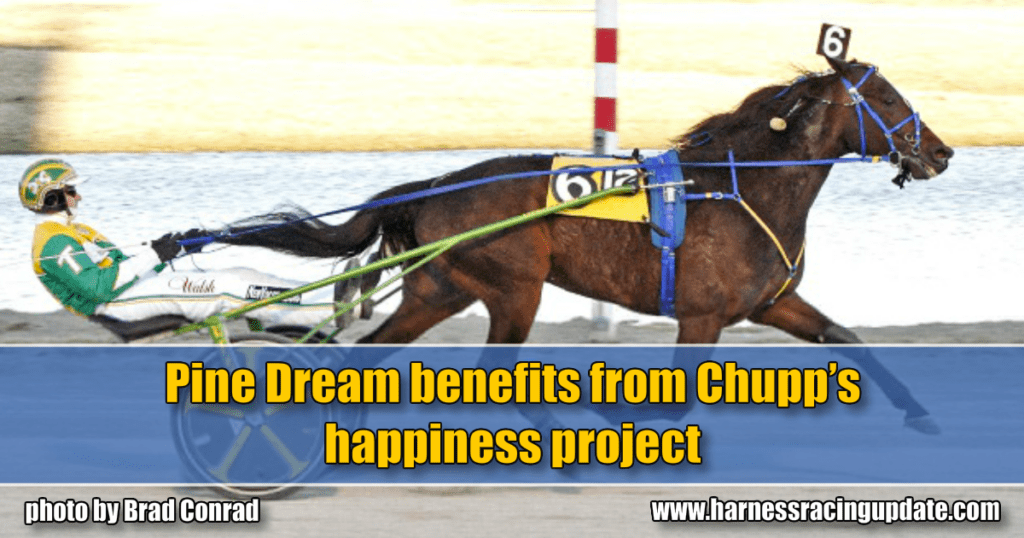 When Merv Chupp purchased Pine Dream for $27,000 last August at the Blooded Horse Sale Company’s summer mixed sale, the trainer didn’t know what he was getting himself into. But after figuring out how to keep the gelding happy, the trotter has responded by earning nearly $110,000 and collecting a check every time out in more than six moths of racing in the open ranks.

When horseman Merv Chupp attended Blooded Horse Sale Company’s summer mixed sale last August, he had his sights set on buying a pacer. When the horse brought more than he was willing to spend, Chupp returned home to Illinois with trotter Pine Dream in tow. Purchasing the Pinetucky—Kasha Hanover gelding may have been “Plan B” for the veteran owner and trainer, but the diagonal-gaited bay has earned six figures and become one of his best speed sale finds.

“I don’t feel like we’ve done anything special, but it’s all about attitude with him. Everything about him is mental,” Chupp said. “He’s got talent on the racetrack, but you’ve got to be able to use it.”

When the hammer fell, Chupp had acquired the then-6-year-old for $27,000. Looking for a horse with back class that could race in conditions just under the open class in the Midwest, he felt Pine Dream would fit the bill. The final price was less than he thought the trotter should bring, and he would later realize why.

“He had a fast enough record. He showed he could go enough, and appeared to be pretty sound. I really didn’t know the horse. Apparently, all the guys over there in Ohio did, or he would have sold for more money I think. He got a bit of a reputation over there,” Chupp said. “Actually, after I bought him, I had a few people mention a few things like, ‘He’s an idiot.’ Until I bought him and got him home, I had no idea.”

Returning home to his farm in Crete, IL with his new purchase, it did not take long for Chupp and his wife, Kelly, to learn the intricacies of Pine Dream. In the barn, he is a gentleman, but on the racetrack, he proved to be difficult. The 62-year-old, who has conditioned bottom claimers and champions alike over the years, devised a plan.

“He pulls, but he pulls because he’s nerved up, so he’s a handful on a daily basis. We treat his stomach for ulcers and he has calmed down a little bit,” said Chupp. “I make sure he’s the first horse I jog every day, before anybody else gets out on the track. When you go to race him, whoever warms him up; he’s a handful for them. He’s fine in the paddock, he’s great in the barn, and he’s fine in a race. It’s just leading up to it I guess.”

Under the Chupp’s care last September, Pine Dream scored back-to-back wins at Hawthorne in his first starts for his new connections. He would go on to collect two more wins at Dayton before year’s end. Pine Dream earned his purchase price back in his first seven starts for Kelly Chupp, who is listed as the gelding’s trainer, and closed out the season with $91,741 in purse earnings, $53,685 of which was accumulated after passing through the sale ring.

Pine Dream has opened 2019 with similar success. Now seven, the trotter has made eight starts at Miami Valley – a four-and-a-half hours ship from Crete – finishing no worse that fourth while collecting a trio of wins and racking up $55,495. In his last attempt, where he was assigned the outside post in the $25,000 open handicap, he raced third for driver Chris Page. Over the 20 starts he has made in the last six and one-half months, he has yet to miss a check racing exclusively in the open ranks, banking $109,180. Pine Dream’s career earnings now top $250,000. The success has come with very little change in training methods or equipment. Instead, the focus has been on keeping Pine Dream in the right frame of mind.

“We have tried to just make him happy, so to speak. He kind of acted like he didn’t really trust people. He’s been through a few barns. He’s pretty high strung,” Chupp said. “He now acts like he likes us; myself, my wife, and my groom. He looks for us in the barn; he comes to the front of the stall and lets us pet him. We’ve basically just tried to be very simple with him; open bridle, regular bit. I jog him in what we call a happy bridle, no overcheck. We simply try to do anything we can for him to be quiet and relaxed.”

A happy horse is a productive horse, and the Chupp’s patience with Pine Dream has paid off handsomely. The gelding will continue to compete at Miami Valley through the end of the meet before heading to Harrah’s Hoosier Park. He may be a handful at times, but Chupp and his wife are enjoying the experience with Pine Dream.

“I’ve had some other horses that have turned out really well for me, but never to this degree of consistency. He’s been fourth three or four times I think since we’ve bought him, and that’s the worst he’s done,” he said. “He has exceeded expectations. We’re very happy with him.”