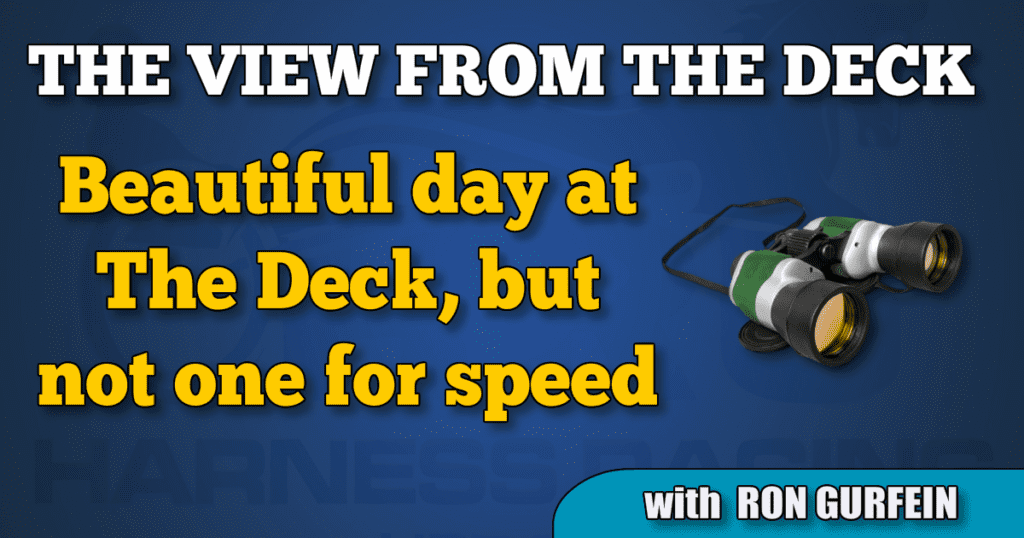 Beautiful day at The Deck, but not one for speed

Saturday was a picture-perfect south Florida winter day — 87 degrees 55 per cent humidity, 6 mph breeze and nary a cloud could be seen. However, we were pleasantly surprised by an overwhelming group of celebrities.

Although Bill Bigler and Nick Salvi were not on the needy list for attention, they did some superior work helping with numbers in all the rapid-paced action. Joe Sbrocco made a rare stop while emigrating from the midwest. I like him as he sold a horse we owned as partners for about 10 times what he was worth. Joe Barbera made a return today, he was also another one of my fun owners in the Monticello days. Also appearing was Tom Grossman of Bluechip Farm, Marvin Katz and Perry Soderberg, Al Saul of the famed Big Al Stable, my good friend Jim Winske, the famed New England milliner (hat maker), Ernie Martinez of Lazarus fame — who obviously had found his hat in the lake — the great Leon Zimmerman, the head of the Breeders’ Cup and crossover breeder himself, the well-spoken Fred Hertrich III, future Hall of Famer Tim Tetrick, and last but not least, my good friend and King of The Meadowlands Jeff Gural.

It was quite the congregation.

There were some great looking future champions on display. I didn’t clock one set faster 2:28 and none slower 2:43, so at those speeds I will leave the times for a later date Fred Grant’s two top colts looked good again today — the -syndicated EL Titan from On With The Show, Oxford Hall was neck and neck with the Murray Brown and partners’ good Power Play Goal a Muscle Mass from Finesse Hanover. Paul Kelley had a nice trio Amos Hart (Trixton—), Tumult (Father Patrick—Graceful Kelly) and Cover (Muscle Hill—To Dream On).

Billy Bigler caught an outstanding colt with Peter Wrenn, number 80, I can not find him anywhere. The aged contingent from Lindy Farm was out and marching this morning. Kings County, SignorCardin and Lindys Crazy Hall all looked impressive they were followed by Lindy TheGreat, Eurobond, and Magic Joe Lindy and finally the top fillies from last year Lindy Pearl, Mother Teresa and the very swift Taylor Swiftly.

Keep the questions coming along with the kind words. Have a wonderful week.