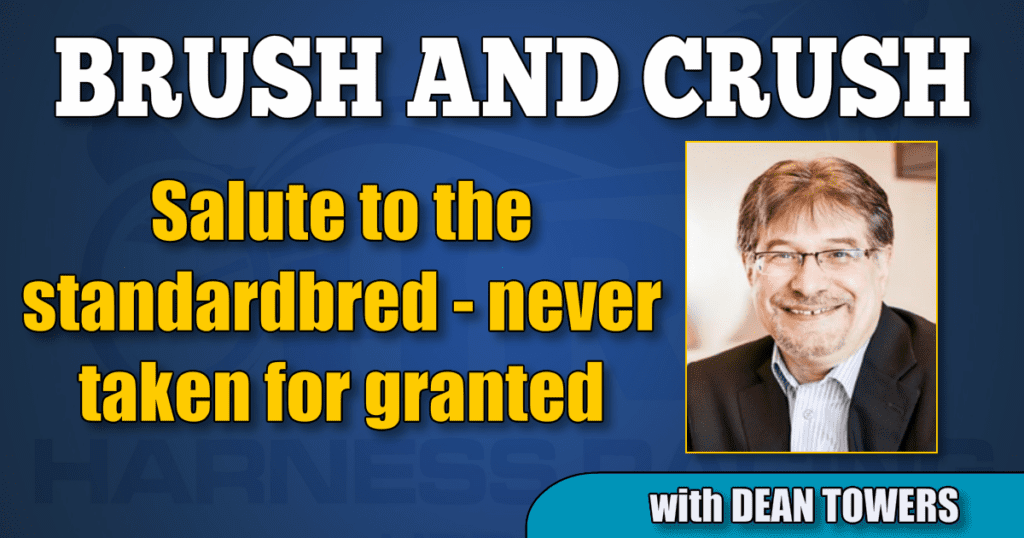 Salute to the standardbred – never taken for granted

Last week I presented on a couple of topics at a harness racing officials conference in Atlantic Canada. It was an interesting get-together and I was happy to be a part of it. As most of you know, harness racing in that part of the world is much different than many others. A good purse is $1,500, and handle can be less than $20,000 a card. Because of these economics, many of the officials were attending, for the most part, on their own dime and time. And they came from all over the Maritime provinces – a lot having to take a day off of work (at their real jobs) for the Friday session.

At the end of a Q & A period, I turned the tables and asked the audience a question – Why do you do it? Why do you donate so much time (and money) to be a part of the sport year after year for seemingly so little in return?

For one gentleman from Cape Breton Island the answer was simple:

“The standardbred. It’s all about the horse.”

I looked at a lady in the third row; she was nodding. A man behind the Cape Breton attendee (who I think drives the starting car and does track work for an abbreviated meet) smiled knowingly.

Maybe this should not surprise me. I see it in many other parts of the world; at the Ohio fairs, in Northern Ontario, Alberta, and Indiana.

When I got home, I opened my browser and saw the headlines at Santa Anita. 19 horses have died since Christmas at the Southern California track. The story is a big one; it made the nightly news on U.S. and was the lead story on radio shows for the morning drive.

While they’re trying to figure out why this is happening in such frequency, people are weighing in with some opinion. And the breakdown statistics cited are mind-boggling. On the new Santa Anita dirt track (during races alone, not counting training deaths), 2.51 out of every 1,000 starts has yielded a fatality since 2010.

Foiled Again raced 331 times in his illustrious, beautiful career. If Foiled was a thoroughbred, he’d have had an 83 chance to be euthanized on the track. That’s not a misprint, 83 per cent.

If you told Ron Burke his prize charge had more than a four in five chance to not come home, he probably would’ve retired him a hundred years ago.

Foiled Again didn’t perish of course. He showed up Sunday at the Dan Patch Awards, at a hotel, surrounded by dozens and dozens of people, lights, music cameras. And he didn’t bat an eye.

Meanwhile, I was reading about the tremendous mare from Down Under, Winx. Over the years she’s raced 30 times and won all 30 she races quite a bit – once every three weeks or so. American race fans marvel at her longevity and the frequency in which she because you rarely if ever see a horse race like that in the In fact, for stud prospects, a four-race year could be considered taxing. And a week or so after a race, a quick blowout is commonplace in the training community to get a horse ready for his next one, which may or may not be within the next 45 days.

The workhorse standardbred would consider that schedule a trip to the horse Club Med.

I’ve owned many standardbreds, but don’t work with them. When I speak with people who do, there’s a common thread. Sure, individual complaints crop up – the horse won’t trot, he doesn’t try hard enough, he breaks for no reason – but there’s never a complaint about the breed.

Whether in Atlantic Canada, Akron, Ohio or Acton, Ontario, it’s the same thing – respect for a remarkable breed. This industry never takes the standardbred for granted and everyone seems to know how fortunate they are. It might be the thing I like most about this sport.