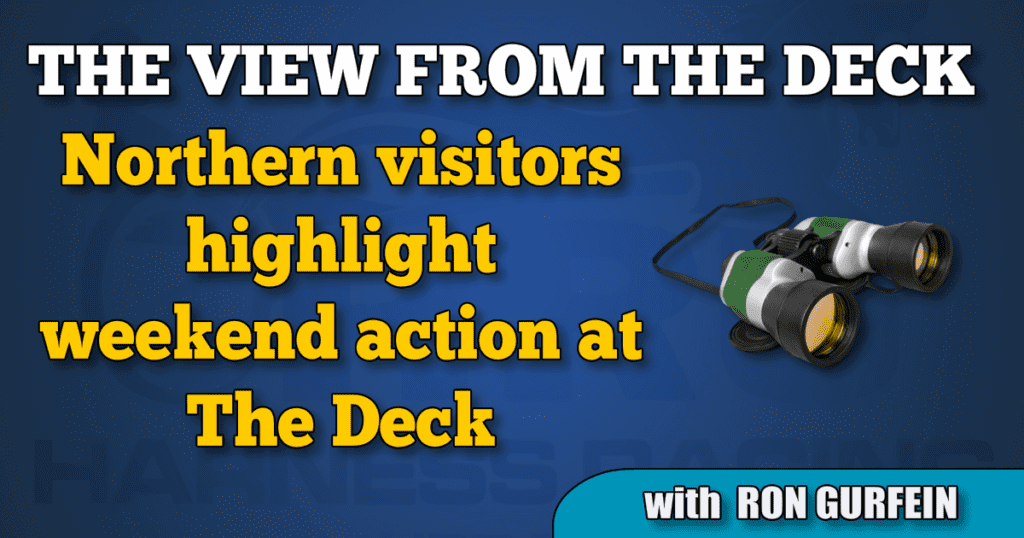 The early morning showers and a soaked racetrack did nothing to deter a great turnout Saturday morning at The Deck at Sunshine Meadows. Aside from the usual suspects, there were a few new and interesting personalities. For there was David Anderson who owns three horses in the Alagna barn accompanied by his beautiful sister Jessica Buckley who just happens to be the president of Woodbine Mohawk Park. What a family — great looking, ambitious and intelligent. Their dad, Bob Anderson, passed away far too young, and spending time with his kids on Saturday got me thinking how much I miss the great times we had together. Also mingling in that group was the famed director of racing at Woodbine Mohawk Park, Bill McLinchey. The entire group, that also included Jim Fielding, was very informative about the slowing of handle due to a more than rough winter weather.

Other new but familiar faces were my very good friend Chris Coyle of the famed Olive Branch Farm in Wingate, NC — where I am told the great Foiled Again spent much of his vacation time. Last but not least came Richard Finklestein who reminds me that I claimed my first two horses from his dad — Jerry’s Pluff and the InLaw, but now that I am writing this article I think it may have been a sister named Carol. Please correct me next time we converse.

The very generous couple of Dana and Jan Parham announced that they would be having a barbecue next Saturday after the breakfast on The Deck from 1 to 3 at their home almost directly across from Sunshine Meadows. All the deck visitors are invited. I will be on The Deck to give you directions, but for gate access please RSVP to spoofer@cox.net.

Friday saw some keen Lindy Farm action. The as yet unnamed Muscle Hill filly from the great mare Moms Millionaire was fabulous, as was Sweet Lucille a Sweet Lou filly from Dancing Barefoot and Uncle Joe T a colt by American Ideal—Aunt Caroline, clocking a nice mile in 2:33/:36. Hall It Off c Cantab Hall—Pearl Axe was very good besting Pastor Lindy c Father Patrick—Lindy Crazy Dolly and Do No Lindy c Donato Hanover—Lindy Land in 2:32/:35.

Capitol Comet c Chapter Seven—Myolin soloed in 2:33/:35. Prefect Hanover the Father Patrick colt from the fabulous Passionate Glide made his debut in a slow sub-3:00 after returning from minor surgery and looked wonderful. To quote Domenico Cecere, “he is a nice horse with a great mind.”

Saturday’s groupings were under rather wet and windy conditions and most of the works were concentrated on conditioning not speed.

I was informed by mister Myron Bell that the Alagna trainees never race and are taught to finish together so I will no longer speak of them in racing terms as for example bested, out gamed etc. Horses in Alagna’s barn that were impressive Saturday were Sea Of Life a Brittany bred colt by Captaintreacherous from Fresh Idea in 2:40. Force N Fury a colt by Captaintreacherous from My Little Dragon also in 2:40, Choir Master colt by Mach Three out of Ideal Helen, Inclined a colt by Mach Three from Artistically Inclined and What The Luck a colt by Somebeachsomewhere out of the well-named Donna Lee all in 2:54.

From Team Zeron Miss Willa dominated as she usually does, the Andover Hall lass from Miss Athens out shined Fear The Pasta f So Surreal—Pasta Lavista, Tennessee Rain, g Father Patrick—Rustic Rosie and Sixteen a Donato colt from Mets Inn.

Peter Wrenn was on the move speeding a bit with a great looking group of 3-year-olds including the fabulous David McDuffee owned Chin Chin Hall ( a brother to Cantab) Swan Before All and. Outloud.

I did spot a nice pair of fillies from Fred Grant that I had never seen before that looked very nice, Figure (Andover Hall—Décolletage) and Undersong (Cantab Hall—Ginevre) both bred by Russell Williams.

Please take note that I give you the breeding the way it is written in the registry and many of the names do not seem correct to me. If you see a blatant error please email me so I may correct it in the book.