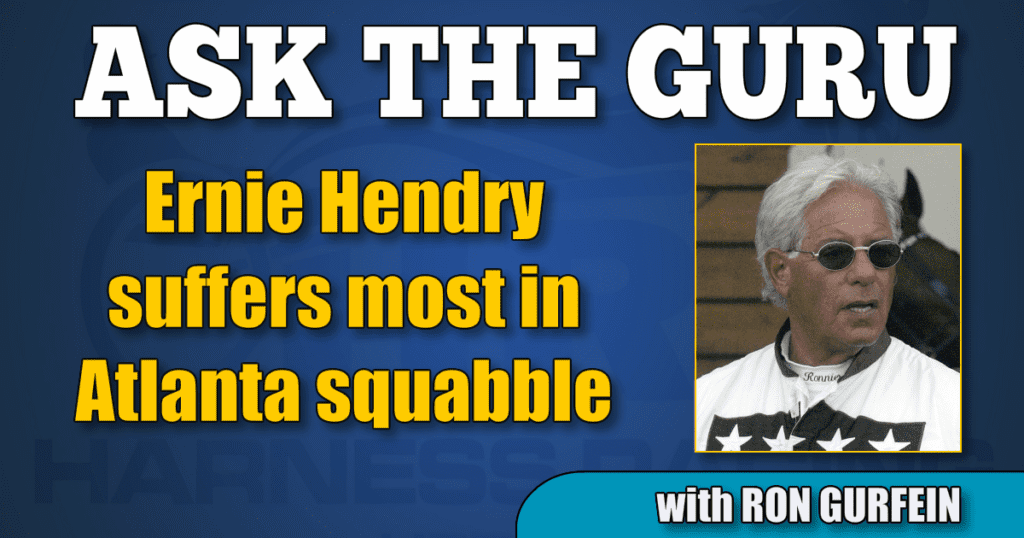 Plus thoughts on bandages over boots and more restaurant picks for south Florida.

Tidbits: The night of the Atlanta auction I lay in bed thinking about one thing: the caretaker and assistant trainer. Ernie Hendry I truly feel for you. You are the biggest victim. I could only relate the situation to Continentalvictory and her wonderful caretaker Marita Berglund. In this type of circumstance she would have been devastated. The only thing I can say to Ernie is a quote from Alfred Lord Tennyson, “‘Tis better to have loved and lost than never to have loved at all.” They can remove the horse but in no way can they remove the experience or the memories. I only wish that you have a great one this year.

The reaction to my Rick Zeron column (full story here) followed party lines, or should I say country lines. Most of the Canadian responses were defending the commission and frying me for being so “naive.” Ninety-five per cent of the Americans were very supportive of my description of the events and were very alarmed at the severity of the punishment. What all this means is beyond my pay grade, so l leave it to you to figure it out.

Ronnie Burke finally gets his Hambletonian winner albeit after the fact. However, he inherits the mess and is faced with a lose-lose situation. If she races well, of course, she is the Great Mare Atlanta, she was always great, but if she doesn’t race well, Ronnie did a lousy job. I personally would have liked to see her in a smaller barn with less tumult. I think mares get stressed from too much action and a lack of quiet. These are some of the most dominant problems with mares tying up. When you have a high profile horse it is imperative that you are by her side and that will prove very hard in her new home.

There has been talk that some of the mares will retire. If they don’t, what an exciting year ahead. On a much lighter note:

I really love some horsepeople quotes on Facebook recently that I would like to share with you. Mary Perry, “I saw an attractive man spank his kid at McDonalds when he threw his fries on the ground, so I also threw mine on the ground.”  “When I dunk my cookies I think of you and hold them under till the bubbles stop”

Uncredited, ”Since the snow came all the wife does is look through the window… if it gets any worse I will have to let her in.”

By far the cutest from Nancy Johansson, “Whenever I weigh myself I always subtract 10 pounds. I don’t think Boobs, Brains and an Ass this fabulous should count against me.”

Plus a fun story from the “Magic Man.” Four guys are walking down the street and see a bar that says all drinks 10 cents. They decide to try it out and sit down and order a round. The bartender said, ‘That will be 40 cents, please.’ After a while, the bartender returns and says, ‘Would you like another round the guys?’ All said yes and the bartender poured the drinks and said 40 cents please. One man said to the bartender, ‘How can you afford to sell drinks for a dime?’ to which he answered, ‘I hit the lottery for $125,000,000 and I am enjoying it.’ A moment passes and one guy says how come the people down there at the end of the bar are not drinking and the bartender replied, ‘Oh, them? They are from Florida. They are waiting for happy hour when the drinks are half price.’”

The possibility of a Duke, Kentucky rematch in the Final Four looks less likely after the Tar Heels blew the Dukies out of Cameron Indoor Stadium mainly due to the loss of Zion Williamson at the 33 second mark of the first half. Coach K says it’s a slight knee bruise, but with a player of his calbier, any bump in the road is serious. My take was the visitors played at a much higher energy level and I have seen complacency on the Duke team often of late. On the other hand, the Cats should be on a major win streak but for an awful call at Rupp with a buzzer beater that was obviously offensive interference. March Madness is on the way.

I got brutally berated for my omissions in the article about driving colonies. Please read carefully before you throw stones. I quoted a gentleman’s question. He named the drivers, not me I was asked to pick what I thought was the greatest talent pool. I make enough mistakes I don’t need the wrath of the industry when I did nothing at all. I am friends with Timmy Tetrick and know what a talent he is I even suggest his nomination to the Hall of Fame. If those named were my picks he would certainly be included.

While I am quoting I must thank the noted Ontario attorney Bob Burgess (Blair’s dad) for the kind words he bestowed upon my column. “Ron, Congratulations on your fine article this morning on Rick’s recurrent miseries with the Ontario horse racing regulators. It seem that they cannot even respond properly to Larry Todd’s demand for disclosure on a timely basis. Given the prevailing anti-standardbred bias in Ontario it is not surprising that this Zeron case is still making headlines when only the standardbreds are racing, they seem to save all the bad publicity for us.”

Ashley Leslie asks: You mentioned a gentleman (John Patterson, Sr.) showing you why brace bandages we better protection that trotting boots. Could you enlighten me as to why that is we use boots 99 per cent of the time. I don’t see much in the line of bandages anymore.

Equipment in this area has sadly changed in the past 50 years. The quality of brace bandage and wraps that were available in the ‘60s no longer exist. When that started happening I switched to vetrap that was lighter and performed the same service. Back to your original query, Mr Patterson put a boot on one of my arms and a properly made brace bandage over cottons on the other and proceeded to hit me with a mallet to replicate the power of the horses foot. The amount of pain with the boot was far greater than with the bandage.

However, there are more positives to bandages over boots. Boots have a tendency to slide and with dirt under them, they gall the skin. More blood from trotting boots come from irritation than from interference. The boot is thick and with a bandage underneath it’s providing a larger surface to hit. I would venture vetrap, with cotton applied properly, will provide a much smaller target for interference. Lastly, the tighter bandage has the ability to widen the colt out behind more than a boot does.

The fact that you don’t see them around is because people are lazy. It is much simpler to throw on a boot than properly put cottons and bandages on a shin. I just looked at a montage of photos from 2018 and 90 per cent of the top class trotters wore bandages, though I did notice one of Ake Svanstedt’s colts wearing boots.

Todd Rosenberg asks: I have appreciated your restaurant selections in the past. I am a snowbird from Ohio who winters in Lake Worth, do you have any favorites north of Pompano, Boca, Delray or Lake Worth?

I will not rehash the dishes, but my old standbys are still the best: Frank and Dino’s, Trattoria Romano, and La Valletta are all excellent. Frank and Dino’s is the best value as they have a wonderful happy hour where all drinks are half price and some fabulous appetizers, as well. They also have a live singer many nights.

New York Prime has great food and is a fun scene with two great pianists and good music from early evening. Near you, I would suggest Cafe Sapori on Southern Blvd north side of the street just before Washington. Great food, servers and management is wonderful. In Delray I will add Tramonti and Cut 432. A new surprise last week was Trattoria Nonna in Boca, a small old fashioned eatery with a lot of charm for a strip mall eatery. The food was fabulous as was the service and you can have a great meal without leaving your first born, a feat that is hard to do in many of my favorite Boca establishments.

Hopefully we will hear an end shortly to the Zeron saga. I hear a lot of dribble that he has a lot of money. Ask the Guru, it doesn’t last long when you are not working and why let the powers that be sit back and think they did the right thing when it was far more devious than proper. Misunderstanding and innuendo have put the entire process into turmoil. I am sorry for ranting again.