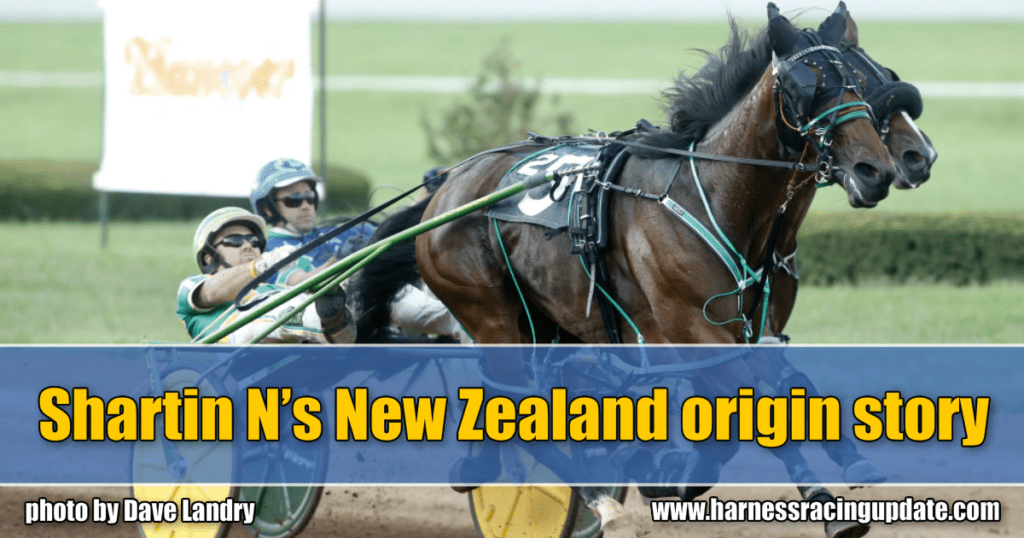 How a headstrong pacing mare from Christchurch — named for a thoroughbred racetrack — rose to become just the second Down Under horse to win a Dan Patch Award after the legendary Cardigan Bay.

Dan Patch was more than a harness racing superstar in the early years of the 20th century in the USA. The horse from Indiana was the most famous athlete in all the land, whether two- or four-legged.

It is no surprise then that the annual awards provided by the U.S. Harness Writers Association for the best horses in all categories are known as the Dan Patch Awards.

In the history of the awards, there was only one Down Under-bred horse that collected a Dan Patch Award for his trophy cabinet and that was the legendary Cardigan Bay, who won the trophy for Older Male Pacer in both 1965 and 1968.

Some 50 years on, the New Zealand-bred mare Shartin N has created a history page of her own by joining Cardigan Bay as just the second Down Under-bred horse to capture a Dan Patch Award.

Shartin N, besides winning the trophy for Older Pacing Mare, also became the first mare in harness racing history to win over $1 million in prize money in a single season of racing. Her record for the 2018 season stands at 24 starts,19 wins and one second for earnings of $1,053,236.

Amongst those 19 wins were nine in major stakes and she remained undefeated in every stakes race she contested — they being:

Shartin N now has every right to be considered for the Horse of the Year title to be announced on Feb. 24 at the Dan Patch gala banquet in Orlando, FL.

Her achievements are even more remarkable considering those nine major wins were spread over almost eight months of racing — a testament to the mental and physical soundness of Shartin N herself and just as importantly to the ability of her trainers Jim King, Jr. and his wife Jo Ann Looney-King to keep her razor sharp for those diamonds in the crown.

The Shartin N story began back in Christchurch, New Zealand with her breeder Grant Crabbe. The 65-year-old motor mechanic by trade lives just around the corner from Nevele R Stud and is a regular at that farm servicing vehicles and helping out with horse work.

Crabbe trained Bagdarin, the dam of Shartin N, on a share arrangement with her breeder Bruce Francis of Ashmorven Stud. The future looked rosy for Bagdarin when she won her first race start impressively at Ashburton in February, 2011. Then a couple of mediocre performances followed by a vet examination revealed chronic arthritis of her knees. That meant the racing career of this daughter of Live Or Die was over shortly after it had begun.

As a result of the share arrangement, Crabbe had the choice of breeding the second foal from Bagdarin.

“I thought Tintin In America had the most devastating speed of any horse I’ve seen race in New Zealand and with his arrival at Nevele R Stud it made the choice an easy one “ Crabbe said recently.

“I have seen a lot of foals over the years gallop around their paddocks, but one day I was blown away with the speed of this Tintin In America filly as she set sail across my paddock. She had the speed of a thoroughbred, so I thought I had better give her a thoroughbred name… So Shartin after the track in Hong Kong (which by the way is spelt Sha Tin).”

Eventually Crabbe broke in this talented female. She was a little “heady” early on and wanted to get on with it. She paced free legged and broke in nicely with Crabbe being patient with her.

Shartin N qualified at Ashburton in November, 2016, winning her trial both comfortably and impressively as agents were quick to enquire about a sale.

The Victorian-based trainer Dean Braun quickly organized a trip to Christchurch to drive her and within a month of qualifying she was on a plane bound for Australia.

ON A ROAD TO STARDOM

Shartin N had her first start in a race on Jan. 29, 2017 at Kilmore in Victoria, which she duly won comfortably after sprinting home her final quarter in 27.4 seconds.

“I could tell from the day I drove her at Spreydon Lodge in New Zealand that her biggest asset was her speed and it was a no brainer to buy her for the asking price,” said Braun.

Looney-King said she, “also admired Tintin In America as a racehorse for the sheer speed he possessed and the fact that Shartin N was from a Live Or Die mare made me feel very comfortable about what I was buying for myself and my clients.”

Shartin N was always a little head-strong and was a work in progress in most of her starts in Australia. She did have a great constitution though, which made it easier for Braun to travel with her. In just her fifth career start, Shartin N won the Tasmanian Oaks. Now this may not have indicated the talent that was to unfold in 2018, but on a chilly night at Melton in June, 2017 Shartin N did make a lot of people sit up and take notice… including an American owner named Richard Poillucci.

In just her seventh career start, she sat outside Jilliby Kung Fu and wore him down to record an impressive win in 1:52.5. Some eight months later, Jilliby Kung Fu won the Chariots of Fire in 1:48.8 and then finished second in the record-breaking Miracle Mile won by Field Marshall in 1:46.9.

Three weeks later, in July, 2017, Shartin N won the Queensland Oaks, demolishing some smart fillies with a 54.3 second and 26.4 second last half and quarter.

By now, Poillucci — who had a couple of years earlier purchased Nike Franco from the Dean Braun stable — was smitten with the ability of this lightly-raced 3-year-old filly and made Braun and his owners an offer too good to refuse.

After winning her 13th and final start on Australian soil on Aug. 18, 2017, Shartin said goodbye to the southern hemisphere and said hello to a new career on the other side of the world.

Shartin N settled into her new surroundings in Delaware without a hitch. Her new trainers King and Looney-King were delighted with her looks, but were concerned about photos of her rigging.

“When Tim Tetrick drove her the first couple of times it was like fireworks… She was going to do it her way and he was going to have her do it his way. Without Tim’s gentle hands and my husband’s good training she could have been a hot mess,” Looney-King said.

By the way, Looney-King is the first female to drive a winner at The Meadowlands (on Jan. 31, 1977) and is also the mother of the bubbly and award-winning Heather Vitale, well known to many social media devotees Down Under.

Shartin N had her first start in the USA in March of 2018 and between then and the end of November she saw the starting gate on 24 occasions for 19 wins. She garnered 129 of a possible 130 votes in the year-end Dan Patch award voting in the Older Mare category.

“Shartin’s just a great mare,” Looney-King said. “She falls in line with everything, is very low key in the barn and ships well. She’s all about business on the track and respects the people she is closest to. She loves her caretaker and respects her trainer and driver. It’s been a great partnership and the trip of a lifetime. I’m so grateful to Grant Crabbe for breeding her.”

There is one final chapter to this fairytale story and an important one in the make up of a superstar horse — her sire.

In this instance, it is probably one of the most underrated stallions in the southern hemisphere with the comic character name of Tintin In America.

Both the breeder and Shartin’s first trainer Braun were full of admiration for the sheer speed that this son of McArdle and Zenterfold possessed.

Jo Ann Looney-King however replied, “Tintin who?” when told about the sire of her wonderful mare, but was reassured when it was revealed he was a son of McArdle.

Tintin in America did not receive the patronage a horse of his ability deserved when retired to stud in 2011. From his first three crops though — which were three years and older at the end of the 2017/18 season and which only numbered 125 foals — there have already been 10 per cent of them that have won in excess of $50,000 and that doesn’t include a potential rising star in the Tritton barn called Gods Spirit.

Horses such as Zee Dana 1:54.6, Divine State 1:51.6 and Share The Road 1:56.1 have displayed exciting ability, while a couple of females in western Australia in Dame Puissant 1:56.2 and Dior Mia More 1:53.2 have shown they are amongst the best of the fairer sex in the west at various stages of their careers.

It is the opinion of Shartin N’s two trainers to date that better times possibly lay ahead as she matures mentally and graduates from the school of racing. Heaven help any mares racing at the highest level in North America in 2019 if this prediction comes to fruition.

We will conclude this amazing story of a mare named after a thoroughbred racetrack with the words of Jo Ann Looney-King.
“I never get tired of talking about Shartin… She’s my dream horse.”