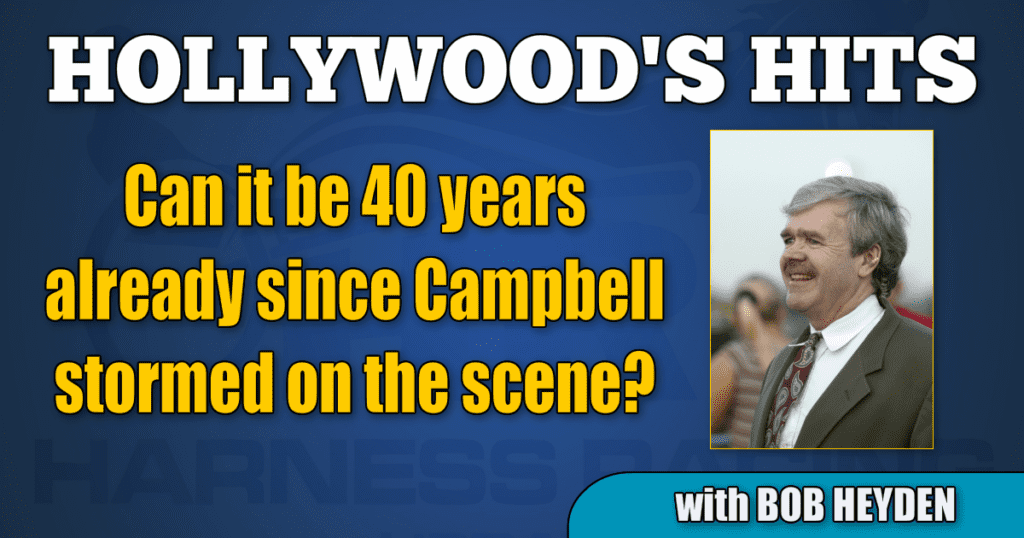 Can it be 40 years already since Campbell stormed on the scene?

Can it really be 40 years since John Campbell stormed on the scene by winning the first of 16 Meadowlands driving titles?

It was also 40 years ago that he won his first $100,000. On May 24, 1979, Campbell won the $108,000 Oliver Wendell Holmes driving Merry Isle to victory in a 14-horse field. Merry Isle was the favorite and winner. Second place Hot Hitter was the third choice in the wagering and would on to capture divisional honors (the second choice was 4.00-1 Good To See You who was eighth from post 14; Genghis Khan was also in there and finished seventh for Eddie Cobb at 38-1). Seven future Hall Of Famers drove in this race, including: Campbell, Herve Filion, Del Insko and Ted Wing.

It was also 40 years ago that Niatross stepped onto the track for the first time and would go unblemished and be named Horse of the Year after a perfect 13-for-13 campaign. He won the $862,750 Wilson that year to nail it down. He would repeat his HOY heroics at 3 and to this day remains the last standardbred to be so named at both 2 & 3 in the United States (Somebeachsomewhere equalled the feat in Canada thanks to a HOY tie at 2 with sophomore Tell All and a win, outright, at age 3). Niatross joined both Bret Hanover (1964) and Nevele Pride (1967) to be unanimously voted their division’s best.

It was also 40 years ago that Hanover Shoe Farms had a rare trifecta in the Hambletonian. They were 1-2-3 in summary and finish with all three broodmares named ‘Hanover’.
1. — Legend Hanover out of Laurita Hanover
2. — Chiola Hanover out of Clorita Hanover
3. — Butch Lobell out of Briana Hanover

A. It was Gerald Baldachino with a 20.2 win percentage thanks to winning 21 of 105 starts.

Big M openers through the years

Opening Night through the years at the Meadowlands was often the second week of January, or later. Here’s a look at some memorable ones:

Jan. 19, 1978 — The highest Opening Night win price occurred when Gypsy Hill Night paid $91.20 for Joe Greene. Track was “good” for all 10 races.
Jan. 12, 1979 — No winning favorites all night and no driver repeats.
Jan. 12, 1980 — Sloppy and then slow going all night. One of the three slowest nights in Meadowlands history; Campbell won four times. The fastest mile of the night was the 2:05 by Newt Lobell. The slowest was 2:08 by Columbia Brooks.
Jan. 9, 1981 — The meet opens with two-time defending leading driver Campbell winning with Spanish Scirocco. J Ds Buck overcomes the 21-degree temps to score in the feature in 1:56.1.
Jan. 8, 1982 — JoAnn Looney becomes the first female driver to take the opener (Henry The Eighth). Genghis Khan-who would go on to win a record 16 Meadowlands races in a single meeting, was third on this night in the $35,000 invitational.
Jan. 10, 1983 — Nilmot Ernie takes the featured $30,000 trot over a sloppy track in 2:04.2. Walter Case, Jr. makes his New Jersey debut finishing second with Master Regal N.
Jan. 10, 1985 — Doubles for Bill O’Donnell and Ray Remmen, a triple for Campbell and Boomer Drummond scores in a strong $35,000 invite. Tuff Choice began his record 13-race win streak for trainer Joe Holloway.
Jan. 9, 1986 — Lustras Big Guy for Bob McIntosh overpowers his rivals in the invitational. He wins in 1:55.4 over veteran Hoosier Hotshot, who would wind up his career with 99 victories.