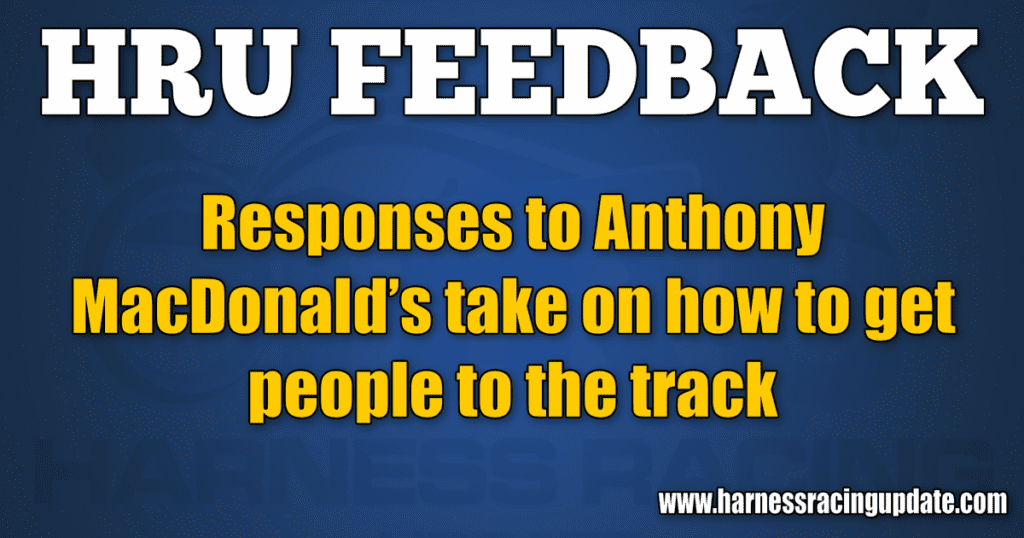 RE: How to get people to the track (full story here)

First, shorten time between races. People today want more action. Second, tracks must go postward on time. It is crazy you say post time 5 minutes and 9 minutes later the race has not gone off. Some tracks it will say zero minutes to post and the horse are just coming on the track. They think the count clock helps, not if they would race at post time. Stop the stalling except for equipment repair. Most young people are used to faster action for their money so the slow time between races hurts because return on dollar is not always great. Race secretaries must make more competitive races, less horse at below even money.

More thoughts on How to get people to the track

Education within the industry itself is of prime importance. Scientific research has shown that whipping a hard-working horse is more detrimental than it is beneficial. Let’s start with that. Either the elimination of whipping altogether or much stricter adherence to the rules must be employed.

Then there is the boot to the hocks. It is simply not necessary and definitely not good for those thinly-protected joint bones that can so very easily be damaged with this sort of “encouragement.”

Next up, Lasix, a drug that is abused beyond belief. It has been banned on race day in other countries and in some events in the U.S.

Then, of course, the illegal drugs that still rear their ugly heads along with the trainers that still try to outsmart the authorities and their fellow industry mates.

Last, but not least, is the problem of what happens to these young racehorses after their careers are over. Some are placed with responsible owners and live in good homes. Not enough of them end up that lucky. Far too many get sold to the buggy community, which is not the quaint, good life that the trainers and owners would like to have you believe. Far too often, these horses are overworked, not fed and watered properly, not dewormed and vaccinated as they should be, etc. In other words — abused! Very often, they end up broken down wrecks in auctions where the kill buyers frequent and purchase for shipping to the slaughter houses. Or they hold them ransom for rescues — some legit, some not — to plead with the public on social media for donations to save these poor, broken down souls that were once standing in the winner’s circle or producing beautiful babies to be sold at yearling auctions.

Yes, as Anthony states, education is very important for our industry. Too bad far too many are so close-minded to the problems that are killing it. Perception is so important and these days, with social media at everyone’s fingertips, our industry is not as secretive as it once was. It’s not so easy to cover up and ignore the indiscretions of some, the horrible stories of horses being abused and dumped into kill pens. Some millionaires, some youngsters, some older broodmares, some breeding stallions, some just your run-of-the-mill working racehorse that made money for some people along the way, but didn’t warrant a good home in retirement. Kinda makes you wonder why it continues to go on.