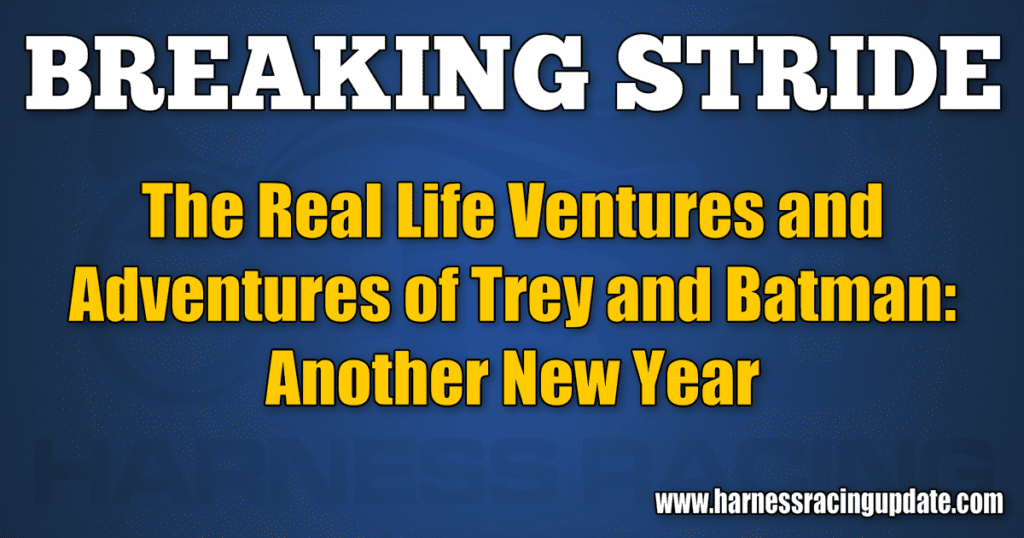 The Real Life Ventures and Adventures of Trey and Batman: Another New Year

We were rolling down interstate 77N, heading towards his sister’s mansion. My windshield wipers pushed away afternoon sleet with muffled thumps. My new horse partner would usher in the New Year with relatives and friends. I would pick him up at noon, January 2, 2019, and return him to his family farm.

He asked, “Do you make resolutions?”

“Not since 2014. That was the year I resolved to never make another New Year’s resolution. Unlike eating more vegetables or promising never to play air guitar while driving a motorized vehicle, the 2014 resolution stuck.”

“Yeah, for 15 years I always made resolutions, among them was NOT to get involved in harness racing again. I love the damn sport, but it’s way too expensive for a person of my wherewithal. You know what happened, never missed a week at the betting window, always raised my hand for a yearling in the fall. I mean, who needs the guilt of an unfilled promise given on a stupid holiday.”

He gave me an approving nod and said, “I take it you are not a big fan of this holiday.”

“You take it correctly. In public or in private, dating, married, single, married, single again – I never recall a New Year’s Eve that ended well. Hell, for about a decade I do not recall several New Year’s weeks, especially the time I woke up on January 2nd under a bench at a train station in Buffalo.”

He smiled, “New Year’s CAN be a drag, sort of forced.”

I flicked on my blinker to change lanes, “One of the few good parts of New Year’s is the plan where all racehorses have their birthday on the first day of January, that was a shrewd move by somebody. Remembering dates is not one of my strong points.”

He asked, “Speaking of dates, do you have one after you drop me off?”

“Just with a dozen chicken wings, a few beers, and Netflix. I’m screening a double feature of Nick Hornby movies, High Fidelity and A Long Way Down.”

“Last three years, I always watch A Long Way Down instead of watching the ball drop. Overall, I give the movie a B minus, but it has a New Year’s Eve theme. Four complete strangers accidentally meet on the roof of a building nicknamed Toppers on the last day of the year. They all show up with the mission of committing suicide.”

“For a movie loaded with dialogue, centered around depression, suicide, infidelity, anxiety, and regret, it’s not as dark as it sounds.”

“I can’t tell you THAT. Trey has artistic integrity and couldn’t possibly live knowing I ruined your potential viewing.”

He said, “I’ll give you a hundred dollars if you tell me how many of the four go through with jumping.”

“None, their plans get ruined when they meet and start talking. They decide to come down from the roof alive and to hook up in the spring to see where things stand.”

He said, “I’ll put that on my list of movies I will never see.”

I shrugged. “I see this movie as a metaphor for my harness racing Jones. January is the pits, I don’t watch races, the stakes horses are jogging in blizzards, and the bills pile up like dirty snowbanks – the whole scene is depressing.”

He winced and said, “Stay away from Toppers.”

“Nah, the tallest building in my town is McDonald’s. The people in the movie are just like some of the people in racing, after the hype from the yearling sales, the wintertime blues set in. We kill time until we sort of spring to life in the spring. It’s like we need to recharge our batteries, make sure we can believe again.”

I smiled, “Of course when racing season revs up, and your horse isn’t what you dreamed it would be, some of us look at our checkbooks and feel like booking a room at Toppers – or we begin to make resolutions to bail on horseracing. Instead, we pick up the yearling catalogs in the fall; it’s sort of a circle of life thing.”

“What about the other New Year’s movie, what was the name?”

“High Fidelity, a classic – John Cusack and Jack Black are members of a group of oddballs who are stuck in the past. They endlessly talk about old records, songs, groups, singers, record labels, and throughout the movie they are constantly making lists like – your top ten songs that have a horse in the lyrics.*

The characters in Hi Fidelity have carved out this quirky niche in life. They are dreamers who are out of step, but somehow, they portray people we would want to know. The vinyl record store where they work is a place we want to be.”

We pulled into his sister’s driveway. He put his hand on the lever to open his door, “I might watch that movie, and your description sounds like it could be about your racing pals.”

As he stepped out of my car, he stuck his head in before closing the door and said, “Happy New Year Trey, let’s have fun with the horses in 2019. Oh, and stay away from Buffalo.”