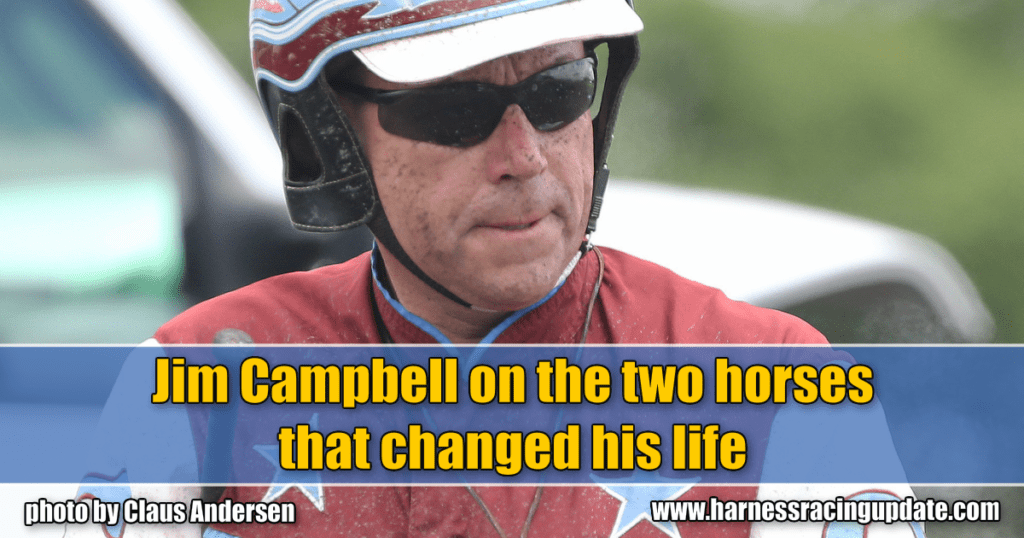 The Horse That Changed My Life: Jim Campbell

Asked for the story about the horse that changed his life, trainer Jim Campbell said it is difficult to pick just one.

“There’s a couple of them,” Campbell said. “The first one was Run The Table.”

The year was 1987 and at that time Arlene Traub owned the majority of horses Campbell was training. The fact Sandy Farber owned Run The Table caused some friction.

“She had a 3-year-old that raced against Run The Table and Run The Table was better than hers and she got mad and pulled all her horses and I was left with seven horses, but one of them was Run The Table,” Campbell said. “But, because of him, by that fall, I had a 25-horse stable again. So, he definitely changed my life at that time.”

Run The Table won 14 of 24 races and over $900,000 in ‘87, which was his sophomore season. The charismatic pacer — who had a successful stud career in Ontario followed by an induction into the Canadian Horse Racing Hall of Fame he accepted by being led into the banquet hall and up to the stage — sired 1,450 foals with total progeny earnings exceeding $88 million.

Fast forward eight years and a trotter named for former National Football League commissioner Paul Tagliabue delivered not only the 1995 Hambletonian and a great family moment for Campbell, it was the beginning of a beautiful partnership with owners Jules and Arlene Siegel.

“I was down to five horses in ’94 and that was when Jules and Arlene Siegel asked if I was interested in training their horses. A year later, we won the Hambletonian with Tagliabue,” Campbell said. “The relationship with Jules has gone on for 24 years.”

The Hambletonian victory came with Campbell’s brother, John, driving, something that meant a lot to them and their late father, Jack Campbell, who helped the boys get their starts in the business.

“(My dad) went to go onto the track as John was coming back with (Tagliabue) and the security guards told him, ‘Sir, you can’t go on the track’ and he said, ‘My two boys just won the Hambletonian. I’m going out there,’” Jim said, laughing, adding that he thought of his father a lot this year prior to winning the $512,050 Canadian Trotting Classic with Jules Siegel’s horse Crystal Fashion at Woodbine Mohawk Park.

“I flew in that afternoon and I was driving to the track and I was just thinking of my dad the whole time driving in because we were stabled at Mohawk before I went to the Meadowlands to go work for John when I was 18 years old. So, I just felt like my dad was with me that night,” Jim said. “We were in Barn 4 at Mohawk in the spring of ’79 and then I went down to the Meadowlands that summer to work for John.”

As for the horses that played a huge role in shaping his career, Jim Campbell said he will forever be indebted to both Run The Table and Tagliabue.

“Those two horses made a huge difference as far as my career went. There are other ones, too, but those were the most dramatic because I was down on horses in both cases and those two horses helped me get more horses,” he said.