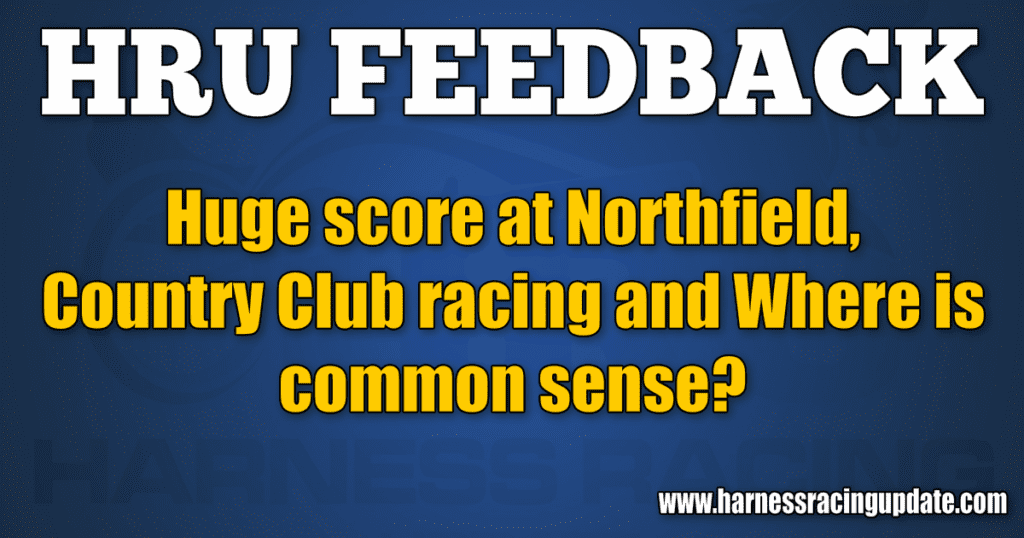 I have been following and missing on the single 6 at NFLD for 2 weeks, but someone had Santa Claus visit them early (Dec. 4) as they were the only winner of $77,000 plus for that wager.

I would hope that you can post how this wager works and why it is not so easy as you have to be the ONLY winner of it. It is a brilliant wager which creates more action in the pool.

Early in the pick 6, the key was Don Irvine Jr. won at 50-1 by running over the favorites in a monster payoff. If you look at most of the payoffs at this track last night, you wonder why it does not get more play.

For a half-mile track, you can close from last and win. IT does happen and the weather is constantly changing as well as the barns and drivers. You really have to pay attention to what goes on at this track.

Unlike the lottery, this is NOT dumb luck hitting this number or any other at the track. It takes skill, paying attention and racing trips-handicapping.

All of those horses figured to win, including the 50-1 shot. I will tell you my little secret but, no one realizes it as Northfield Park in the winter can be a blessing.

The single 6 is here to stay.

I will say that The Meadows’ super carryovers are the only other wager that beats the SINGLE 6. Why? The money is automatically rolled over into the next SUPER and you have more money to win!

You can keep your California and New York tracks. They are overrated as you have no chance as a small bettor in those pools.

You do have a shot at Northfield Park, The Meadows and the PA tracks. Trust me, they do pay.

Merry Christmas to that one lucky winner!

I wish you could contact them as they probably almost had a heart attack as the 5 horse crossed the wire first in a race for their lifetime!

It’s about time we finally admit what we have realized for quite some time and that is, the style of harness racing in North America over the years has morphed into Country Club or Gentleman’s Racing. One has to only look at a race from Australia or New Zealand to realize it. The only similarity between these two hemispheres regarding harness racing may be the equipment because the “racing” couldn’t be more different. Harness racing “Down Under”, has actual racing in the broadest sense of the word, where drivers don’t give up an inch of real estate without a fight and horses are parked 2 and 3 wide for entire races. I don’t think it could get any more competitive without some bloodshed.

Now, switch the channel to any harness track in North America. It doesn’t even look like the same sport. Drivers are so accommodating to one another, with holes being opened and leads being intentionally surrendered, one has to ask if you are watching an actual race or some type of equine exhibition. Advocates will say the North American style is a form of strategy. One has to only look at the empty grandstands to realize advocates are disappearing.

Of course, racing in the past wasn’t so “friendly” as it is now. You better be sitting behind a beast if you left the gate for the front if you drove against Stanley Dancer or Joe O’Brien. They left their hugs and kisses back in their locker when they drove and would park out anyone without hesitation. Many have theories on why and when a harness race in North America became so predictable, routine and yes, boring.

My two cent answer is it happened when catch drivers in the mid 80’s became the norm. I will not question their integrity, as that is for another day but I will question their on track relationships with each other. In 2018, most tracks at this point have the same 5 or 6 drivers in every race. Because of this, the individual style of each driver adds up to the same type of race. For example, without naming names, every track has 1 or 2 drivers that seem to leave the gate with every horse they drive. You then have 1 or 2 drivers that love to come first up and then you have the conservative 1 or 2 drivers that seem to always make a late charge. Multiply this by 10 or 11 and you have a day or night at your favorite track in 2018.

Also, you have to factor in the workplace relationship element. Whether you work in an office, a coal mine or in this case, a racetrack, you build up tolerances and relationships with your co-workers. I believe this has diluted the competitive nature of many catch drivers. If they have to give up the lead in the third race or open a hole up for a parked horse in the fifth, they know a ”courteous gesture” is coming their way in a later race if needed. You see this type of payback on the racetrack daily. I’m not smart enough to know how to fix this problem other than building straight away, no turns, stay in your lane racetracks where holes and lead changes are no longer required or handed out but I am smart enough to know the product known as harness racing in North America, unless kept breathing by slots or sports wagering will fail in it’s current state.

Where is common sense?

When considering racing rules, one has to wonder where in hell are the judges and rule makers hiding? Look at the recent Progress Pace at Dover Downs. In looking down the entry list, we see three entries from the Burke behemoth. Clearly Burke employed the “Rabbit -Entrymate-Strategy”. But of course these entrymates were shown as independent entries. Mr. Burke has long been employing this routine along with others such as Mr. Takter for years and yet no interest is being shown in taking action by those principals put in charge of insuring the best interests of the bettors.

So ask yourself why there appears to be little interest in upsetting the golden apple cart and in protecting the little guy? When you put PEOPLE, OPPORTUNITY AND MONEY TOGETHER we are left with the inevitable. Why did it take years to do anything about Lou Pena, why are there dozens of interpretations of a simple breaking rule, drivers opening holes up for their fellow drivers, why does it seem like the WEG and Swedish track oversight is light years ahead of the 1960 type officiating we have in the U.S., where are the experts when irregular payouts boggle the mind, is there anyone that’s getting paid for oversight that understands SIGMA and STANDARD DEVIATION?

Frankly, we are NOT being adequately served by those that are in charge. We should expect more of our racing officials. I find myself angry when watching a race like the Progress Pace for not only the way the race was run (including the absence of entrymate designation) but the earlier elimination races where best horses were extended to only the necessary qualifying finish positions. This is great for the owners, trainers and horses but cheated those wagering on those earlier races and expecting to see the best racing effort for their dollars.

So as we, the betting patrons are getting more intelligent year by year we are still being spoon-fed a racing product with rules and oversight like it’s 1960 and little if any accountability.