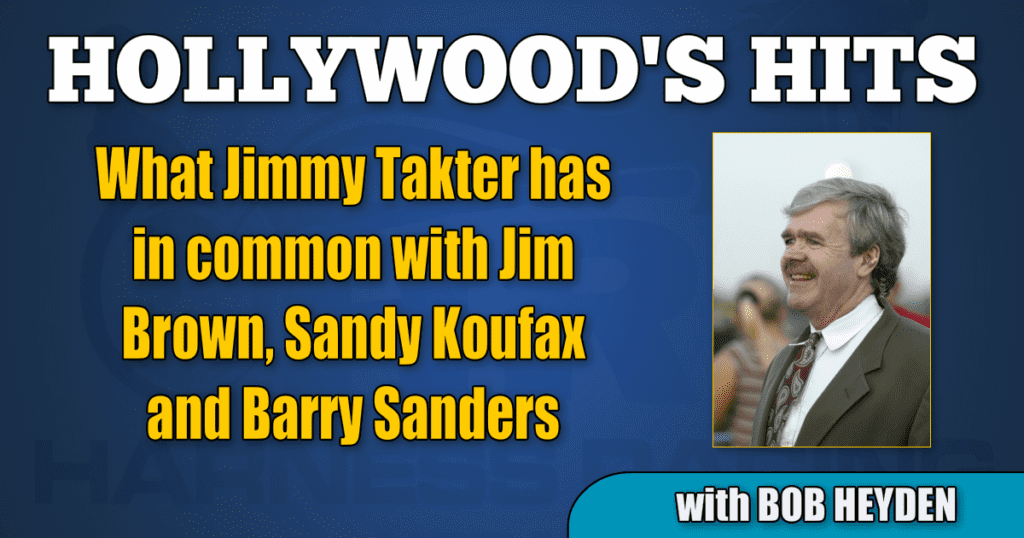 Going out on top – just like Jim Brown, Sandy Koufax and Barry Sanders

Trainer Jimmy Takter has something in common with a trio of the greatest athletes to ever play their game.

Trainer Jimmy Takter has something in common with star athletes Jim Brown, Sandy Koufax and Barry Sanders — they all retired at the top of their game.

Detroit Lions running back Barry Sanders retired at age 30 in 1998, the year after he became just the third person in NFL history to rush for over 2,000 yards in a season. Sanders was no slouch in his 10th and final NFL year, either. He averaged over 93 yards per game to finish the year just under 1,500 yards — about the same number of yards he was away from breaking the all-time career rushing record held, at that time, by his idol Walter Payton.

Fellow running back Jim Brown of the Cleveland Browns retired at age 29 in 1965 after posting his second best rushing numbers (1,544 yards) and second best all-purpose yards from scrimmage numbers (1,872) in his nine-year NFL career.

Takter’s stable earned $8,598,775 in 2018 during his final season before retirement. His earnings rank him second in all of North America — some $2.5 million ahead of the next trainer. Takter had 3,800 fewer starts in 2018 than top-earning trainer Ron Burke.

Taker’s career UTRS is .374. His career total of $130,132,900 is also second all-time (behind Burke) and that number is skewed by the fact the USTA didn’t officially have trainer stats until 1992, and Jimmy was racing on his own for seven years by then. (Including world half mile track record holder Sir Taurus).

As Takter exits stage left, just think of how tough it would be to duplicate some of the things he has done in his career. Let’s just look at half a dozen:

1. Nobody has repeated as trainer of the Horse of the Year in the 21st century. Takter is also the last trainer to do so and is the only trainer to send out three straight Horses of the Year with two of those being different horses: 1997-Malabar Man; 1998-1999-Moni Maker.

2. In 2014, 313 of 314 votes cast for year-end honors in the sophomore trotting divisions went to horses trained by Takter. Datsyuk, trained by Charlie Norris, broke up the sweep by earnings a single vote.

5. Not a single U.S. Horse of the Year in the 21st century has set foot on European soil. Takter was the last to do that in a big way as Moni Maker won in seven countries in 1998-1999.

6. Takter was racing in the invitational at the Meadowlands at age 24 in 1985 with Bandolino and in the Hambletonian in 2018 at age 57, winning an elimination with Tactical Landing.

Everyone remembers Duenna winning the Hambletonian, but what about Dancers Crown?

The 3-year-old passed away just weeks before the 1983 Hambletonian — the first million-dollar trotting event ever held. Tragedy struck the Dancer barn as he lost his prized colt, the prohibitive favorite for the third New Jersey edition of the Hambletonian. A look at the sparkling freshman season of Dancers Crown shows you just what kind of colt he could have been.

The son of Speedy Crown — still number one in earnings among all trotting sires — was 9-for-9 at age 2 with his freshman victories by a combined 47 ¾ lengths. Owned by Rose Hill Breeding Farms, Inc. and Rachel and Stanley Dancer, Dancers Crown banked $406,512 at two, culminating in a dominant win in the $653,250 Peter Haughton Memorial named in honor of Stanley’s godson. In the Peter Haughton, Dancers Crown scored by 1 3/4 lengths over Mr Drew, who actually went off the favorite over Dancers Crown (2.20-1), in 1:58.

He last trained July 17, 1983 at Vernon Downs in 1:57, before intestinal complications would creep in and claim his life.

A dozen Horse of the Year nuggets

1. McArdle is likely to become the 27th different sire to have a Horse of the Year thanks to his son, McWicked (Speedy Crown’s double with Moni Maker in 1998-1999 counts as one siring credit).

2. No Triple Crown winner in 2018. The 15-year gap since No Pan Intended on the pacing side representing the longest ever dry spell.

4. With Takter retiring, how difficult will it be now for anyone to approach the record seven HOY titles that Stanley Dancer posted?

6. How long will we go without a HOY repeater? It’s going to be at least 20 years come 2019 since Moni Maker doubled up the last two years of the 20th century.

9. Casie Coleman trains likely HOY McWicked. Linda Toscano was voted into the Hall of Fame the same year Margareta Wallenius-Kleberg breaks the gender barrier at the Hall Of Fame and JoAnn Looney has the first ever pacing mare (Shartin N) post a $1 million season. Ladies unite.

10. Can Tim Tetrick’s record of seven divisional titles in one year (2012) ever be beaten? Approached?

11. How long can Muscle Hill and Somebeachsomwhere go without having a HOY? It doesn’t seem possible, does it?

12. Chapter Seven, a Horse of the Year himself, can he go back to back in the Hambletonian with a filly and then a colt? (Atlanta and Gimpanzee)?