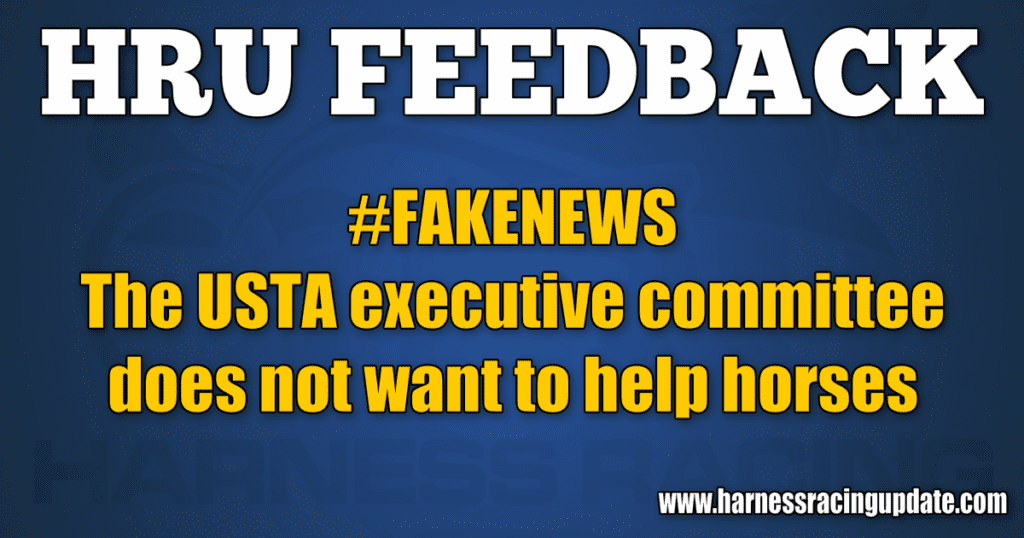 #FAKENEWS The USTA executive committee does not want to help horses

As a trendy statement, “Fake News” seems to be thrown around frivolously, typically with little to no meaning. After this week’s United States Trotting Association executive board meeting, “Fake News” seemed to hit social media even before the meeting’s adjournment.

The Standardbred Transition Alliance (STA), has been a hot topic for the last year. The STA is currently a group of 13 people within the harness racing community appointed by Mike Tanner and Russell Williams in September of 2018. The idea was formed based on the clear success of the already existing Thoroughbred Aftercare Alliance. The TAA accredits existing racehorse aftercare organizations based on important criteria such maintaining a current 501(c) 3 federal status, being pro-racing, and create funding to aid accredited organizations. The TAA was founded in 2012 and has granted $10 million to 7,000 thoroughbreds to be retrained, rehomed or retired by their 64 accredited organizations (www.ThoroughbredAftercare.org).

At this week’s executive committee meeting, a proposal was brought forth by Mike Tanner to divert $75,000 from the SOS program that has currently been in place to help rescue horses. When the directors’ questions began, it was clear that the Standardbred Transition Alliance had not shared any details deemed important, such as a business proposal, budget, mission, or vision in place to accompany the request. Without the necessary details, it was decided that the $75,000 fund allocation would have to be “tabled” until the STA could create a more extensive business plan and budget to accompany their request. An alternate suggestion, by Joe Faraldo was made. Faraldo proposed that the STA would receive a portion of the allocated funds upon reaching stated goals; at each goal met they would then receive additional funding. Supplementing STA’s growth further as the goal levels were achieved down the line. The motion to table carried however, because of the underlying failure of a concrete plan being presented.

Soon after, the president of the USTA, Russell Williams, (Trotstorm @Russell_USTA) took to social media, private messaging USTA members to “Tell Your Directors to support the STA and retweet, please #supportSTA” and made a public Tweet:

“After an intense day, we have a good budget. All action items complete but one. The directors can’t get together to support the Standardbred Transition Alliance. We are the last major breed in the US to have zero infrastructure for post career horses.”

This tweet went viral, as it became quickly assumed that the executive committee directors that voted against the $75,000 fund allocation were against the STA. The assumption portrayed by the USTA president’s social media post was that the directors’ action reflected their disinterest in helping seed this new entity, which is misleading. Clearly the majority of the executive committee felt that without a proper business proposal in place, it would be irresponsible to allocate those funds at this time.

If you revisit the Twitter and Facebook posts you will see a plethora of negativity surrounding this. On occasion through Facebook comments, the USTA directors are referred to as “heartless”, “disgusting”, and “clueless”, in retrospect this isn’t the case. With concern, I reached out to Gabe Wand, a member of the USTA executive committee whom stated, “the majority of our board would love nothing more than to see an effort like this become fruitful, but at this time we just need to see a more transparent plan in place. After raising dues, we need to look closely had such sizable donations—that is our responsibility as directors. We had requests a third of this size and spent an hour discussing them. I supported the tabling of this motion until the time a proper business plan can be conveyed to the USTA directors. To just approve this money when the STA Board has not even had a meeting yet is not fiscally responsible. The committee agreed to meet via conference call once we get this information. I have faith this will be something great, but it needs to be done correctly from the start and needs to make sure their mission is pro-racing and congruent with the USTA’s mission.”

After speaking with other board members this was confirmed.

As an avid supporter of aftercare, I find comfort in Faraldo and Wand’s statements and look forward to seeing the STA become a staple within the harness racing industry. The consensus among board members is that without proper vetting and strategic framework, no board is going to allocate funds on a promise. It is their fiduciary responsibility. I cannot help but think, that in wake of an epic $750,000 social media bust, can you blame the USTA executive committee for requesting a more extensive business plan/proposal before allocating $75,000? I cant.