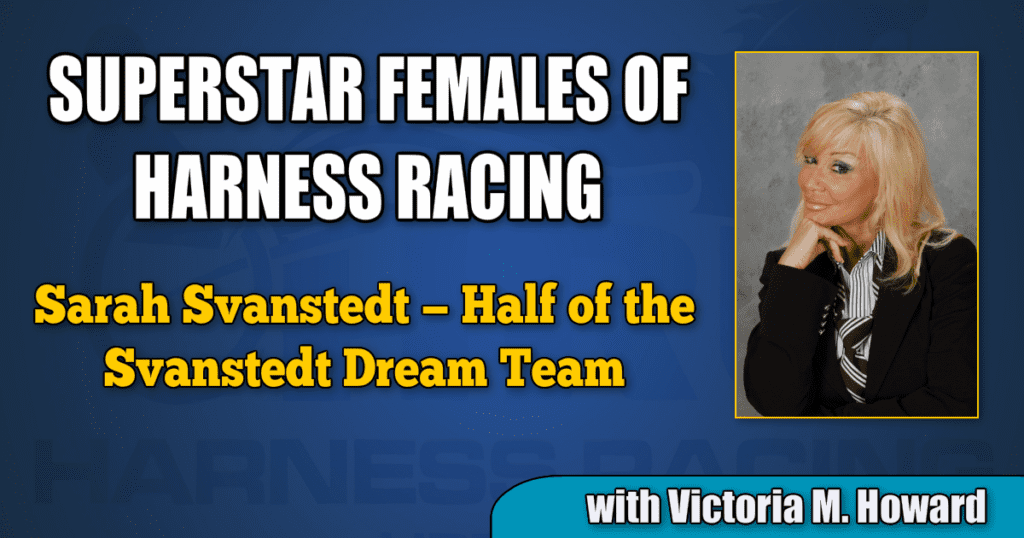 Early to bed and early to rise makes a horseperson healthy, wealthy and wise. That is the motto for the power team of Ake and Sarah Svanstedt.

“We start at 5:30 a.m. feeding the horses and get the first set of horses out on the track at 7,” Sarah said. Normally we have four or five sets to train, so we are not finished until around 11 a.m.

“We take a lunch break, do any paperwork that needs done and usually go to the track in the afternoons.

“On our day off Ake and I spend quality time with our boys and try to catch up on lost sleep.”

How is the Swedish couple’s way of training different than it is here in the United States?

“We pretty much have the same thinking when it comes to training,” she said. “We have the ‘strip’ where we train our 3-year-olds and older horses on. The babies train on the main track.

“Races in Sweden are not much different than they are in the United States except that speed is very fast from start to end in the U.S.

“In Europe, 70-80 per cent of the races are 1 ¼ miles so the drivers think differently in their tactics than here. I wish there was more of a variety of distance in the races here, also.”

The Svanstedts moved to the United States in 2013 and immediately made their mark with their champion trotter, Sebastian K.

Since then there has been Resolve, Perfect Spirit, Centurion ATM, Your So Vain, Heaven’s Door, Six Pack and Plunge Blue Chip to name a few.

When you hear the name Svanstedt you think of a team: Ake and his wife Sarah. Together, they have developed several world champions. Working together 24/7 is hard on any marriage, but for the Svanstedts it seems to work.

“Ake and I have worked together for 15 years. We are both hard working and passionate about this business. We think alike when it comes to training.

“We co-own a farm in Vero Beach, Florida, where we broke and trained in the winter months. But now our two sons are getting older and it is hard to take them out of school so we have decided to stay in New Jersey year round for the time being. Last winter, we stayed in New Jersey and froze, but this winter we decided to take the babies down and Ake will go back and forth.”

In 2017, the Svanstedts won the Hambletonian with Perfect Spirit and in 2018 they set new world records with 3-year-olds Six Pack and Plunge Blue Chip, who just happens to be Sarah’s special horse.

“My number one is Plunge Blue Chip. We have been together since she was a baby and the night she broke the world record at the Meadowlands was unreal. She is an amazing filly to be around and all the happiness and joy she has given us on the track, we will be forever grateful,” Sarah said.

Hoping that the sport of harness racing continues and thrives, Sarah praised John Campbell as a role model for the sport and Linda Toscano as a continued successful female trainer in a male dominated profession.