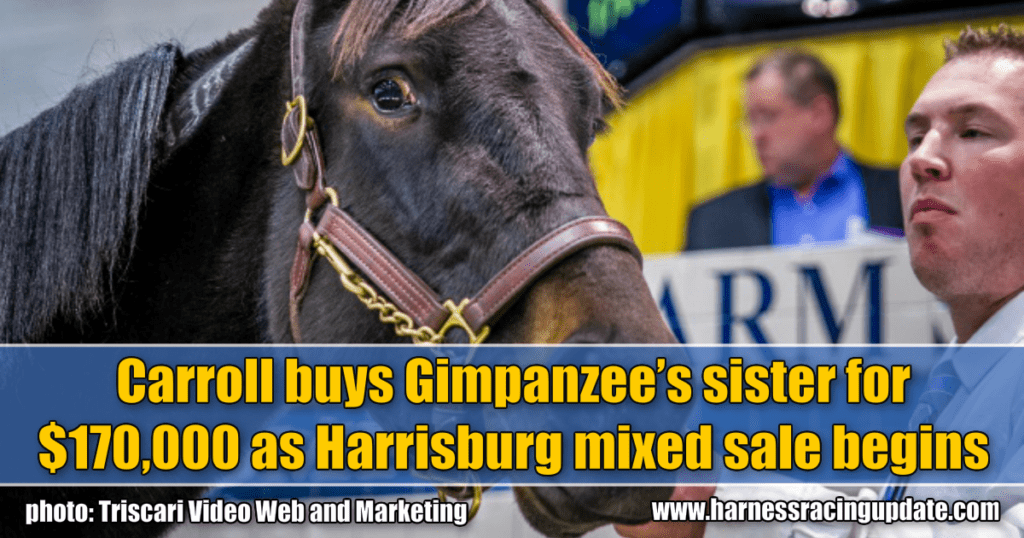 After getting shut out a year ago, the Ontario breeder bought the second highest priced mare sold Thursday’s opening day of the Standardbred Horse Sale Company’s Mixed Sale in Harrisburg, PA. Two Somebeachsomewhere—Galleria mares sold for $280,000 and $157,000, respectively.

“That’s the most I’ve spent on one,” said Carroll of Shedden, ON near London. “I did bid last year $150,000 on one and never got her, so we went last year and we purchased a thoroughbred mare because we couldn’t get a trotting-bred mare, so we’ve got a couple of thoroughbreds at home now that will hopefully work out as broodmares on that side as well.”

Danish Girl, who is in foal to Muscle Mass, is the half-sister to undefeated Breeders Crown champion Gimpanzee.

“She’s got some good pedigree. I hope her brother keeps on racing well,” Carroll said. “I thought she’d go to around $150,000, that’s really what I thought she was going to sell at, but I guess we were duking it out with Crawford Farms and Diamond Creek, so it went a little more than what I was expecting, but (the price) was in the general ballpark.

Carroll said she’s going to look to purchase a few racing mares at today’s mixed session, “and maybe come back home with some to race with for the following year. We always like to have something to continue to race. It’s always nice to have a racehorse to follow for the year.”

She was one of a number of Canadians playing at the top end of the Thursday’s session. Newcomer Shmuel Farhi, a real estate tycoon from London, ON that owns and manages more than 4 million square feet across Ontario. Farhi recently purchased Bill Loyens’ exquisite Windsong Acres north of the city and has jumped into the business with both feet. Thursday, he was the top buyer, spending $313,000 on a stallion share to Muscle Mass ($34,000) and three mares, including Gallic Sea, a Somebeachsomewhere mare out of Galleria for $157,000 that was the third highest mare sold.
“I met Mr. Farhi today. Very nice man. He sounds like a very serious individual, from my conversation with him. He’s got funds to buy and sell on the high end and he’s very ambitious, so I think he’ll be a great addition to the industry,” said sale president and CEO Pete Spears.

Farhi also purchased Pretty Philly G, an RC Royalty mare out of Bourbon ‘N Grits for $90,000 and Rockin Highland, a Rocknroll Hanover mare out of Armbro Ophellia for $32,000.

Both mares were sold by Preferred Equine Marketing on behalf of Hall of Famer Jules Siegel.

“Obviously, Jules’ pacing mares of are unique to the marketplace. I thought they stood out in the catalogue today and they sold accordingly. I’m very happy for Jules and this is a quality family, for sure,” said Preferred’s David Reid.

Preferred sold the top four highest priced horses/stallion shares on Thursday and 11 of the top 12 offerings and grossed $2.479 million on the day to lead all consignors by a wide margin.

“I’m very happy about that. Quality always holds up well and it was proven again today,” Reid said.

Northwood Bloodstock was the second leading consignor with $1,297,000 in sales for 79 horses / stallion shares.

On the stallion share front, Muscle Hill continued to dominate. One Muscle Hill share sold for $150,000 to Steve Stewart of Hunterton Farms. Another, fetched $135,000 from Fair Winds Farm of Cream Ridge, NJ. Tim Klemencic of Trenton, ON paid $125,000 for a Captaintreacherous share.

“A very broad look at the overall quality versus what these horses were bringing, I think today was pretty consistent with last year,” Spears said.

Reid said today’s session is shaping up to be a good one.
“We’ve got a boatload of racehorses that have been racing and winning. We’re well-represented on all levels of the marketplace and we’re looking forward to it. Hopefully, there’s a good crowd that shows up and they are active. Hopefully, we sell a lot of winners. That’s what my goal is.”

Spears said he thinks today’s session will be strong.

“People are going to hit hard on the Fabulous Fillies and I think the racehorses will sell really well and I’m looking forward to a really good day,” he said.
Today’s session begins at 10 a.m.