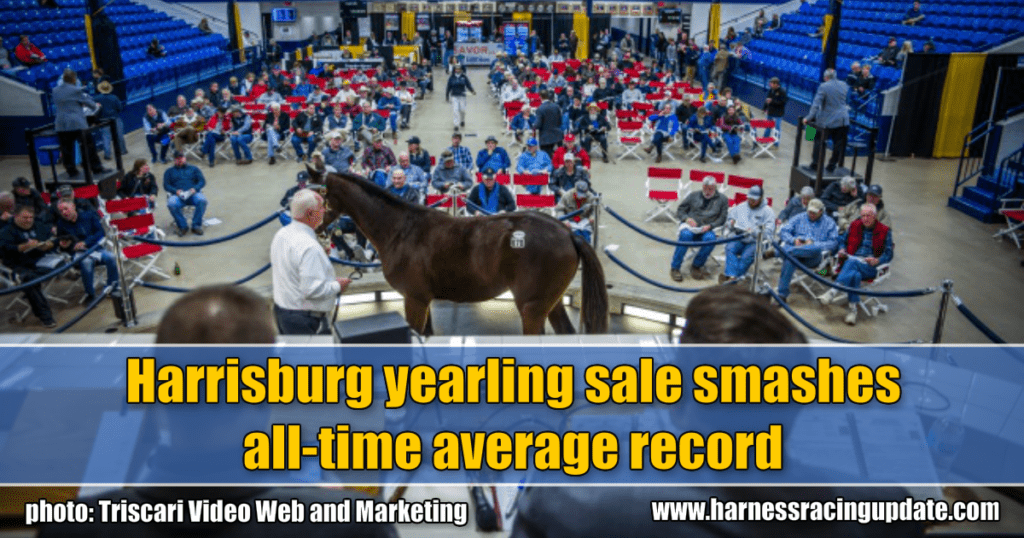 Despite an uneven final session on Wednesday, the Standardbred Horse Sales Company yearling sale concluded with an all-time record for average of $42,675 that surpassed the previous record of $40,824 (set in 2007) by 4.5 per cent (though 218 more horses sold in 2017).

Through three sessions at the Pennsylvania State Farm Show Complex in Harrisburg, PA, 830 yearlings sold for a total gross of $35,420,000 this year.

“It was a fantastic sale reflecting confidence in the industry and the economy especially on the high end,” said sale president and CEO Pete Spears.

“The lower market could be improved by additional opportunities in NW1/NW2 classes nationally,” Spears said.

For the third year in a row a Chapter Seven colt topped the third session. This year, it was hip 806, a colt out of Tantalizing Donna that was purchased by Stroy Inc. for $157,000. The colt was bred and consigned by Winbak Farm.

The only other yearling to reach six figures on Wednesday was hip 705 Sports Style, a Sportswriter colt out of Nothing But Style purchased for $100,000 by Adriano Sorella of Guelph, ON out of the Spring Haven Farm consignment.

Sorella had incredible success this year and last racing Sportswriter colt Jimmy Freight, a winner of $793,544 that sports a mark of 1:48.3. He is both the fastest and richest son of Sportswriter.

“I absolutely loved (Sports Style) from the day I saw him,” Sorella said. “He had so many Sportswriter and Jimmy Freight features I knew I had to have him at whatever the price.

“He reminded me so much of Sportswriter, not just in person, but also on his video. I got him checked out and thought he would be an easy $100,000 to $120,000 colt. He looks well-built and I like that. Having the fastest, richest Sportswriter ever with Jimmy Freight, it’s hard to pass up one like this.”

Sorella purchased three yearlings in Harrisburg and is in on a couple of others.

“Andrew Harris will break and train the babies down. The American ones will stay with him and the Ontario-breds will go to (Richard) Moreau after they are broken. I also bought in on two with (Ron) Burke — hip 70 they paid $170,000 for and hip 140 that they gave $55,000 for.”

Though, a slightly concerning statistic is that $701,000 worth of horses were marked as “not sold” to out-page the $695,000, total, spent by the Burke Racing Stable LLC on 11 yearlings.