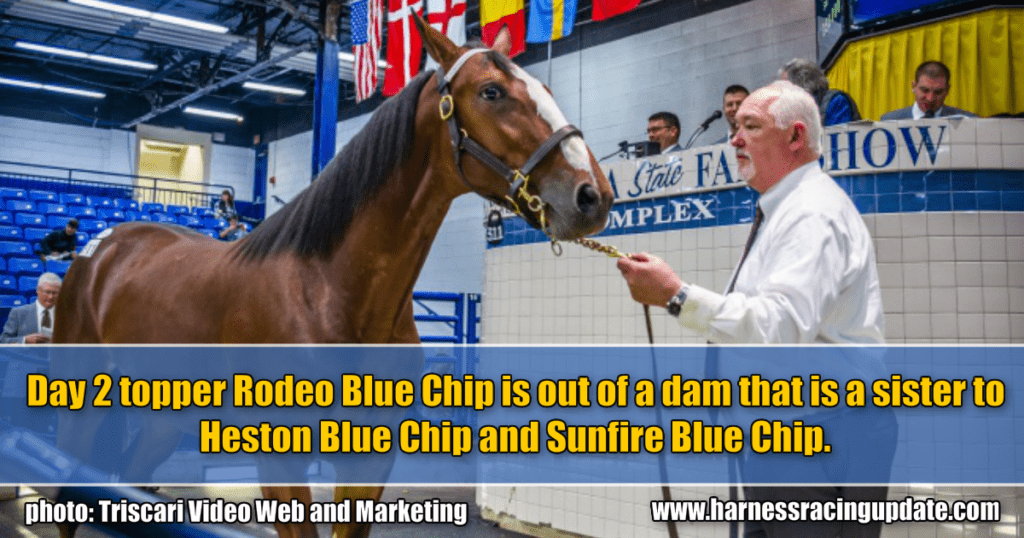 Harrisburg yearling sale up strongly in gross and average as $250,000 bid tops Day 2

Three $200,000+ yearlings top Day 2 of the Standardbred Horse Sales Company’s yearling sale. Through two days, the average of $59,110 and the gross of nearly $28 million are both well ahead of last year’s sale.

Trainer Linda Toscano may be a self-professed “bargain player,” but that doesn’t mean she’s not thrilled to be have Rodeo Blue Chip coming to her barn. Tuesday, the Blue Chips Farm-bred and sold colt topped the second session of the Standardbred Horse Sales Company’s yearling sale at the Pennsylvania State Farm Show Complex in Harrisburg, PA after owner Ken Jacobs made the $250,000 winning bid.

Toscano said the horse was on their radar screen because his dam, Lotsa Motzah, is a sister to both Sunfire Bluechip ($1.5 million) and Heston Blue Chip ($1.78 million). Jacobs previously owned Heston Blue Chip and Toscano trained. An extra attraction is Rodeo Blue Chip is a Sweet Lou colt.

“I’m a girl. I like greys and I like white, but at the same time the old adage is that plain is better. I think we’ve got to throw that out when it comes to Sweet Lou because he’s going to reinvent the wheel. (Rodeo Blue Chip) stands well. He’s just a great-looking colt. He moves well. Ken loved him. I loved him.”

“He did buy a couple of others while he was here, just because he can’t help himself. You can’t take Ken shopping without Ken coming home with a shopping bag,” Toscano said, laughing.

Toscano said she thinks she has eight yearlings from the Harrisburg sale coming to her barn, so far.

“I’m tickled with the group I got this year. I got some beautiful horses and I think we’ve got both New York and Pennsylvania covered and we’ve got a pretty nice balance of trotters and pacers. I’m really excited,” she said.

Whether she gets anymore today in the third and final yearling session will depend on the prices.

“I’m a bargain player. Fortunately, I’ve been blessed this year to have a little extra money, so we’ve been able to reach out a little bit and get some, but from here on in I’m the gatekeeper. I’ve looked at a lot of horses and if I see a bargain, I try to buy it. I look for myself and I look for groups that go together,” she said.

This year, three yearlings topped $200,000 on Day 2 — Rodeo Blue Chip; hip 360 Third Shift, a Chapter Seven colt out of Overnight Command purchased by Ake Svanstedt for $235,000 out of the Winbak Farm consignment and hip 460 Hilly Holbrook, a Muscle Hill filly out of Winky Dink that fetched $235,000 from the Andy Miller Stable out of the Concord Stud Farm consignment.

“There were several consignors that preferred to sell on the Tuesday, so that’s why they were today. That’s fine and you can kind of mix them in,” said sales company president and CEO Pete Spears.

Hanover Shoe Farms continues to have an outstanding sale and has already topped $10 million in gross sales through two days at Harrisburg with 80 more yearlings set to sell in today’s third session.

Despite not buying a yearling on Tuesday, Determination Stable still sits third overall with $662,000 spent, in total, on four yearlings.

Today, 371 horses are scheduled to sell in the third and final yearlings session before making way for mixed sale sessions on Thursday and Friday.