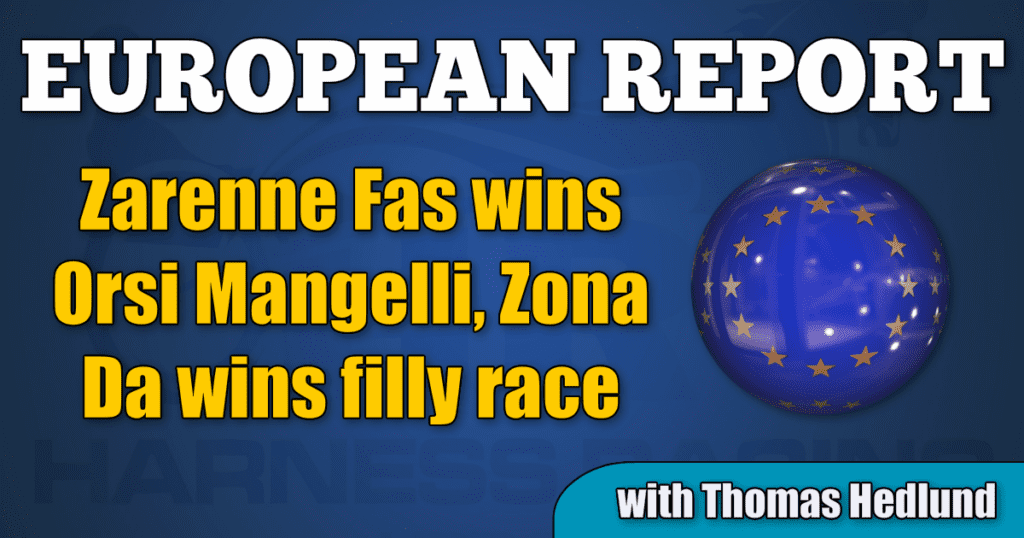 The Gran Premio Orsi Mangelli and Orsi Mangelli Filly were held at Torino racetrack in Italy on Thursday afternoon and in the ladies’ race, trainer Erik Bondo was successful with his Varenne mare Zona Da.

Roberto Andreghetti drove Zona Da to victory and the early lead was the winning concept. Challenger Zante Laser (Maharajah) tried to disarm the leader in the home stretch, but Zona Da showed that this was her day and the 3-year-old mare came home in 1:56.3. The purse in the race was $99,000.

German-bred Mister F Daag (Conway Hall), who won the Derby in his home country earlier this season, trotted outside the leader in the race’s last 5/8ths of a mile but was outstanding and seemed to be horse to beat in the final.

Driver Robin Bakker served his horse a trip second over in the final, which seemed like a perfect spot, while leader Zarenne Fas (Varenne) could keep the pace down during the races’ first kilometer. With 600 meters to go, Bakker attacked three wide with Mister F Daag, but Zarenne Fas had plenty of gas to use in the home stretch and the Michele Di Maro trained 3-year-old easily, without threats, sprinted home to victory in 1:56.4.

Orsi Mangelli ($448,000) is one of the most prestigious races for the 3-year-olds in the world and among American bred horses that have been victorious we can name Adrian Chip, Scarlet Knight, Conway Hall and Malabar Man.

Gran Premio Nazione ($175,000) is another prestigious race that has seen several great horses in the winner’s circle. Moni Maker, Peace Corps, Grades Singing and Ideal du Gazeau are just a few of all top trotters that has entered the track (and won) for participation in ”Nazione”. The purse has dropped a lot and the international attendance is almost zero nowadays.

Sébastien Guarato trained Bold Eagle made his comeback in French Feurs on Sunday afternoon and from position second over, the son of Ready Cash just had to consider the mission as a workout.

When driver Franck Nivard let his horse go for it, Bold Eagle answered and immediately got control of the field. Grand Prix du Centre-Est offered $50,000 to the winner and for Bold Eagle, the race was more of a preparation before more weighty tasks, probably in Paris during the winter meeting.

The meeting opened on Wednesday afternoon and from Oct. 31 to March 2, 89 days of racing are scheduled with a total of 750 races. Approximately $55 million will be in the purses and 121 of the races are open for horses bred outside of France.

In the first race of significance, Philippe Allaire trained Traders (Ready Cash) won Prix des Cevennes ($125,000) for driver Yoann Leborgeois and the duo was seen in the lead during a big part of the race. Mile rate was 1:56,4 over 1.7 miles.

The eliminations for Swedish Breeders Crown were held at Solvalla on Sunday afternoon. Twelve races, three races for four divisions resulted in many great performances.

Svante Båth captured two victories for the 3-year-old colts and geldings. Global Welcome (S.J’s Caviar) and Global Withdrawl (S.J.’s Caviar) impressed and the third winner in that division was Jaguar Dream (Love You).

Hambletonian winner Perfect Spirit (Andover Hall) solved his elimination for 4-year-olds without problems and will probably be the first choice when all finals are contested Nov. 11 at Eskilstuna racetrack.