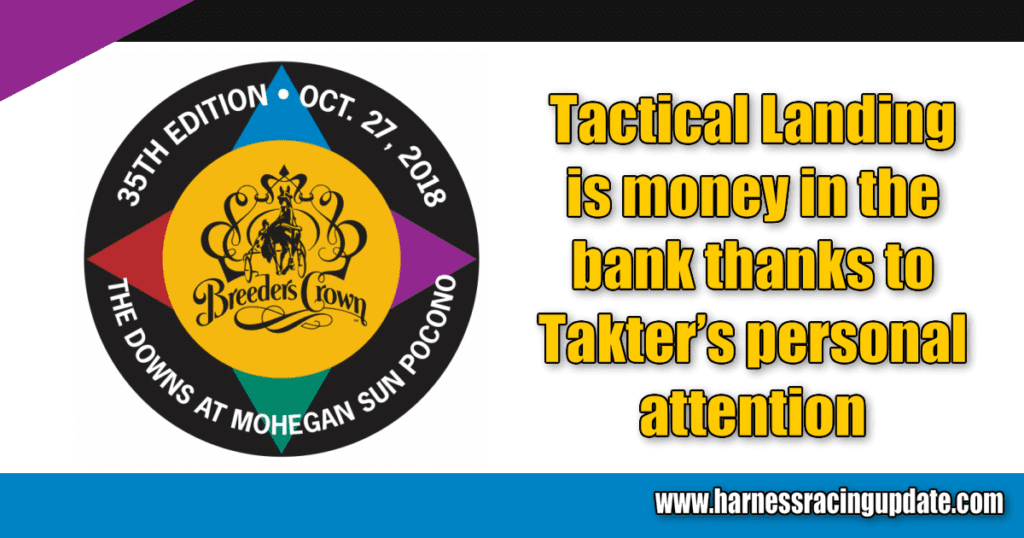 Sometimes, you do get what you paid for. Just ask the connections of Breeders Crown champion Tactical Landing.

Just over two years ago, the group that comprises The Tactical Landing Stable (Ohio) shelled out a hefty $800,000 for Hip #70 at the Lexington Selected Yearling Sale.

A trotting son of Muscle Hill from the Varenne mare Southwind Serena, the horse that was eventually named Tactical Landing very much looked the part of a standout standardbred star.

His first two races, however, weren’t much to look at.

In his career debut on Aug. 26, 2017 at Lexington, Tactical Landing, who had four qualifiers leading up to his debut, broke stride and finished fourth, placed fifth, some 16-plus lengths behind the winner.

His next start, on Sept. 7 of that same year, also at Lexington, was equally disappointing, one in which he broke stride early, leaving him in eighth. He crossed the line a whopping 33 lengths behind the winner.

It was to be Tactical Landing’s last start of his 2-year-old campaign.

Things couldn’t get much worse. But by next July, it would get better for the horse bred by Steve Stewart (Paris, KY), Black Creek Farm (Grabill, IN) and Andrea Lea Racing Stables, (Lakefield Gore, QC).

Much better, in fact.

Under the tutelage of training titan Jimmy Takter, the bay finished second in the first race of his sophomore season, going one better in his next start, a 3 ¾-length triumph at the Meadowlands on July 13.

He came into the Breeders Crown final for 3-year-old trotting colts off a 4 ¾-length score in his elimination on Oct. 20.

Over a sloppy strip at The Downs at Mohegan Sun Pocono on Saturday night, he was jaw-droppingly brilliant.

Sent off as the 2-5 mutuel favorite, Brian Sears had Tactical Landing positioned in fourth as Met’s Hall took the eight-horse field (morning line favorite Six Pack was scratched sick) through an opening quarter-mile in :27.1.

Soon after, Sears rallied his charge to the outside and gobbled up ground on his rivals, striking front with ease, hitting the half-mile mark in :55.1.

With Sears looking more and more confident with each stride, Tactical Landing, who reached the three-quarters in 1:23.4, began to dash away from his foes down the lane, widening his advantage at will.

In the final seconds to the wire, Sears had time to take a peek at the tote board, as the duo went on to notch a 5 ¾-length victory in an impressive 1:52.1.
In taking home the John Cashman Jr. Memorial Trophy, sponsored by Brittany Farms, Tactical Landing paid $2.80 to win.

The six-figure purchase undoubtedly put on a million-dollar performance at Pocono, something not lost on Takter.

Before his trackside interview with Greg Blanchard, he commented, “This is some kind of animal.”

He had plenty more to say once the camera went live.

“You know, we got this horse in early June,” said Takter who has won four of the past five 3-year-old Breeders Crown trotting colt editions. “It’s just remarkable what he has been able to do this year. I am so proud of this horse. He’s one of them. Believe me, this horse is one of them.”

Just how good can he be?

“His raw ability, you know, I’ve trained a lot of great horses like you said, but he’s definitely one of them,” praised Takter who won his 34th — and perhaps final — Breeders Crown title. The trainer is retiring at the end of the year. “Six Pack is a good horse and it’s too bad he got sick, but he would not have a shot on this horse. I know this horse is a level above anything that’s been out for many years.

The horse that once wasn’t so self-assured has finally hit his best stride.

Tactical Landing is now a force to be reckoned with, having racked up eight wins, two seconds and two thirds from 15 starts.

“It was quite a bit of my personal attention,” said Takter who drove the horse regularly before handing the reins to Sears. “You know, he had a lack of confidence in himself and some things like that. Let’s say, I’d spend a good hour on him by myself every single day. This is what we’re working for and I’m very proud of my job, my team’s job. Everybody has done a heck of a job here.”

That job, however, is far from over.

There is plenty more for Tactical Landing to look forward to, both in the short and long term.

The TVG could be next on his dance card.

“Well, we’re getting invited to it so it’s very possible,” said Takter. “It’s something that I have to see how he’s coming out of this race. We’ll see how he comes out of it and I’ve got to talk to the owners and see what they want to do.

“If he holds up, then he definitely could turn into a type for the Elitlopp and Prix d’Amerique. He has the mental ability and strength to go into the Prix d’Amerique. Very few American horses do.”

With $644,300 in his coffers and another head-turning effort to his name, perhaps the best is yet to come for Tactical Landing.

“This horse, he’s been battling a lot of issues,” said Takter. “I have trained a lot of great horses, but the way he carries himself in this weather, I know he’s, by far, the best 3-year-old out there.”