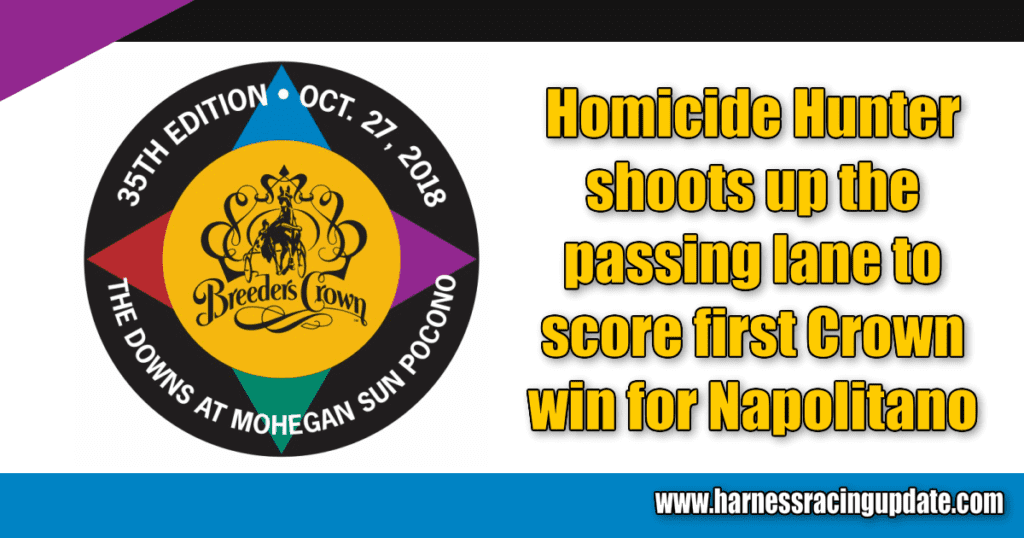 Trainer Chris Oakes and owners Michelle and Albert Crawford did not have to think very hard about who would replace Sears in Homicide Hunter’s race bike. They turned to Pocono Downs’ leading reinsman George Napolitano, Jr., who had driven the gelding in nine of his previous starts over the Wilkes-Barre, PA oval, giving the 52-year-old reinsman his first ever opportunity in a Breeders Crown final.

On Saturday night Napolitano rewarded the trio for their confidence, crafting a textbook pocket trip for Homicide Hunter, who sailed up the inside lane to a three-quarter length victory over pacesetter Top Flight Angel and hard-charging Warrawee Roo in 1:52.3. Fan favourite Cruzado Dela Noche finished sixth.

“It’s easy winning with four-claimers, but not the Breeders Crown. I’m so happy and I’m just so grateful,” said a joyful Napolitano from the winner’s circle. “There’s not much to say, when you win a big race like that and you’ve got the people that I have behind me it’s just… words don’t explain it.”
The result should have come as no surprise to local fans, in their nine previous Pocono Downs-based partnerships Homicide Hunter and Napolitano had delivered seven victories.

“I knew I could count on the horse,” said the reinsman. “He was kind of running out real bad, but I knew once I got him out in the passing lane he’d do his work, and he did.”

As Napolitano praised the son of Mr Cantab and Evening Prayer he was enveloped in a hug by a jubilant Michelle Crawford, sporting a Breeders Crown hat that she fessed up to stealing on her way to the winner’s circle.

“I saw the hat and I said, ‘Hey, I need this. I don’t have an umbrella so I’m going to steal the hat.’ Hopefully, I’m good for it after the Breeders Crown,” said the light-fingered owner.

“We can pay for it now,” added her husband Albert Crawford.

The win was the ninth of the season for the six-year-old Homicide Hunter, boosting his season earnings to $605,770 and his lifetime bankroll to $1.7 million. The Crawfords purchased the gelding at the end of his three-year-old season from breeder Patrick Graham of Pittsfield, IL and Homicide Hunter soon earned a special place in their hearts.

As a four-year-old he scored four wins, one second and two thirds in 16 starts and trotted to a world record 1:50.1 over the Pocono Downs five-eighths oval — with Napolitano in the race bike.

That effort would be just the first time the trotter etched his name into the record books. Three weeks ago (Oct. 6) he won Red Mile’s Allerage Farms Open Trot in a world record 1:48.4, making him the fastest trotter in the history of harness racing and giving the Crawfords a highlight reel moment.

“How many times does he let me kiss him, that’s the question. How many times did I kiss his mom back in the paddock when I got home,” said Michelle Crawford, who purchased Evening Prayer from Graham last summer.

“He’s the sweetest horse there is,” agreed Albert Crawford.

The Syracuse, NY residents said Saturday’s victory would bring a close to Homicide Hunter’s 2018 campaign, but that he would be back in action next season, with some competition from a new stablemate.

“He’s done for this year and he’s going to turn out at Crawford Farms, near my house, so I can love on him every day,” said Michelle.

“Hopefully, he’ll be back for another big year,” Albert added. “Michelle bought Crazy Wow, so he could have a buddy.”

With that, Michelle headed back into the grandstand to pay for her pilfered Breeders Crown merchandise.

“I don’t know how much they are going to charge me for this hat now,” she said with a laugh. “I think the price just went up.”