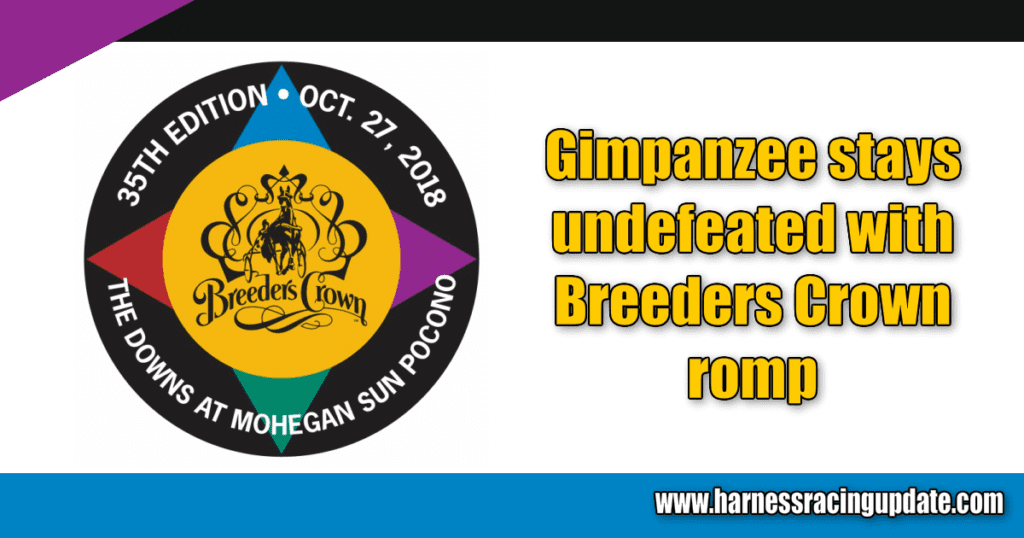 It was a tale of numbers in the 2-year-old colt trotting division of the Breeders Crown as Gimpanzee made it nine wins in a row, providing trainer Marcus Melander with his first Breeders Crown trophy and driver Brian Sears with his 28th top flight victory, as the veteran linesman held his position as the leading active driver at harness racing’s year-end showcase.

The victory was never in doubt for Gimpanzee who allowed stablemate Green Manalishi S to show the way through an opening quarter in :27.3 before leaving the pocket to take command through splits of :57.3 and 1:26.3 while never put to any pressure. Green Manalishi S, content to sit the pocket trip, was joined briefly by Smart As Hill and Super Schissel in chasing the division leader, but Gimpanzee pulled comfortably away from the field to win in 1:54.4 on a sloppy Pocono track. Green Manalishi S completed the exacta with Hudson River rushing late up the rail for third.

Confident throughout, Sears admitted he felt no anxious moments with the precocious colt.

Claus Andersen Gimpanzee (Brian Sears) comfortably pulled away from the field to win the freshman trotting colt Crown in 1:54.4 on a sloppy track.

“No, but it was an off track, so it’s not over until it’s over,” said Sears. “The horse has showed up all year and just knows how to do his job and he got it done again tonight.

“I figured I’d take my shot on the front. I maybe could have sat behind them, but I thought I had the best horse in the race, so I sent him out to the front.”

Melander was reserved in victory while offering praise to his heady colt.

“He’s like an aged horse. You can do whatever you want with him in a race. He’s got a lot of stamina and a lot of speed and everything went well,” said Melander.

With more than $590,000 in career purse earnings, Gimpanzee is returning remarkable dividends for owners Courant Inc. and S R F Stable who purchased the Chapter Seven colt, bred by Order By Stable, for $170,000 at the Harrisburg Sale. Anders Strom of Courant was on hand to watch his colt dominate through the driving rain and was keen to thank the many fans, and co-owner Lennart Agren of S R F Stable, watching from his native Sweden where it was approaching 1 a.m. as Gimpanzee crossed the wire.

“I know my co-owner Lenny is up watching. It’s late evening in Sweden but I trust he’s up and watching this and I hope he’s as proud of the horse as I am,” said Strom.

Strom was earning his second Breeders Crown following a victory with Tamla Celeber in the 2012 edition of the open mare trot, at Woodbine. The jubilant owner is two-fifths of the way through his bucket list and is hoping that Gimpanzee could scratch a third item off the list if he can take next year’s Hambletonian.

“Of course, that’s what we all want to win so… it’s on my bucket list because I have, like, five races I want to win, and we’ve won two – Prix d’Amerique and the International Trot. Then the Hambletonian and, for me, the Swedish Derby, the four-year-old, and the Elitlopp. That would be five,” said Strom.

While Melander deferred the spotlight following the landmark win, Strom was keen to shine a light on the prodigious training talent who at just 26 years of age has found success at the sport’s highest level.

“They have the horsemanship in their blood because the uncle, Stefan Melander, he won the Hambletonian with Scarlet Knight. Actually, I started off having horses in training with (Stefan), but he only trains his own horses but sometimes he makes an exception,” noted Strom about bucket list winner Gigant Neo who won the Prix d’Amerique in 2006.

A good initial experience with the Melander family led Strom to giving the calm, cool and collected Marcus a shot with some good stock.

“He has a great attitude in terms of leadership and I think that working your way through a career as a trainer, leadership is the alpha and omega of that. He has a good way of dealing with the people that care for the horses and that’s the most important issue with having success – having the right people and he has that,” said Strom.

A shot at further bucket list items with Gimpanzee is likely. The talented colt romped his way through six wins in New York Sires Stakes ahead of setting a track record with his seventh win when taking the Agriculture and NYS Horse Breeding Development Fund Two-Year-Old Colt/Gelding Trot in a swift 1:56.3. A Breeders Crown elimination win last week brought the tally to eight, but Gimpanzee is unlikely to make double digits in 2018.

“He’s unbeaten now and going nine-for-nine and winning this race he should probably not have to do anymore this season,” said Strom. “We’ll see what he (Melander) likes, but I didn’t see that the horse was very used today. He was very cool, so we’ll see. He’s nine-for-nine…10-for-10 is even better, but let’s not be greedy.”

Gimpanzee, who earned the nickname ‘The Monkey’ as a yearling, was certainly not monkeying around on this night.
“We started at first to call him The Monkey,” said Strom, by way of explaining the talented trotter’s unusual name. “I want to name all my horses that are born in the same year with the same letter, so it was ‘G’ in that year. This was probably the last one to name and we couldn’t come up with a good name, and we had already nicknamed him The Monkey, then I just said, ‘For God’s sake, just name him Gimpanzee or whatever.’ And now that the horse is good, it’s fantastic.”