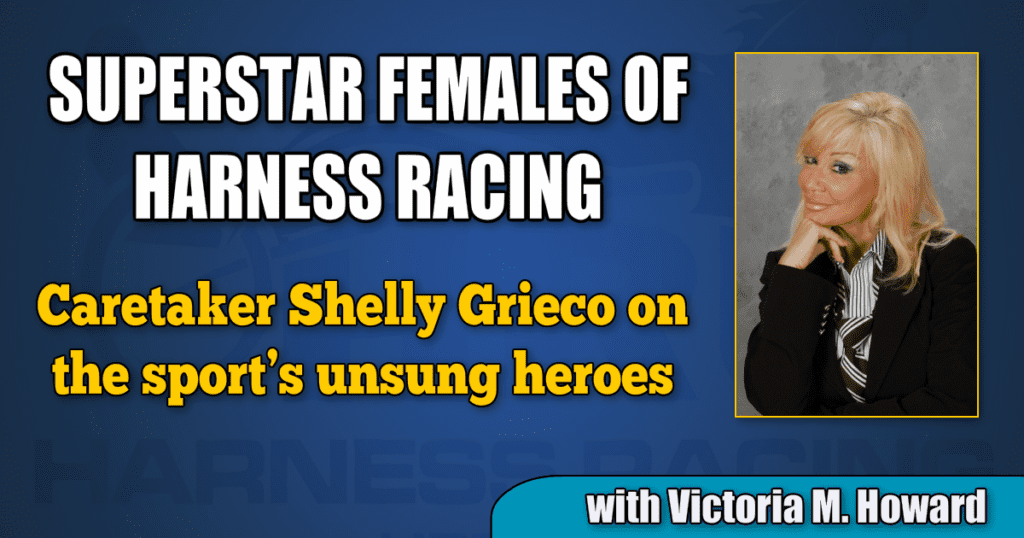 Unlike other children born and raised into harness racing families, one particular young girl did not enjoy going to the barn. Mike Grieco ran a stable in the Batavia/ Buffalo circuit and would tote his young daughter Shelly along to help scrub water buckets and feed tubs.

“I really didn’t enjoy the horses until I was big enough to actually interact with them. Dad mainly had claiming horses and thankfully he had a few old class horses that were patient enough to allow me to learn,” Grieco said.

“I remember sitting on my dad’s lap jogging with him. One day, he handed me the lines and walked away! It was a mare named Sea Comet and she was such a classy ole’ gal that I honestly think we could have hooked her and sent her off by herself and she would return to the barn after her four miles were up!”

When she talks about her dad, Shelly smiles. “My dad is by far my biggest influence. He taught me how to properly care for the horse and to this day when I get frustrated with the business I hear his voice saying, ‘Take care of the horse and he will take care of you.’”

As far as having a social life, well, that is hard to do.

“During racing season we can put in 22 hours a day, so it doesn’t leave us much time to have a social life. We always joke that being a caretaker isn’t a livelihood — it is a lifestyle.”

Throughout the years Shelly has worked for several top trainers, such as Chris Oakes, Ron Coyne, and now for soon-to-be Hall of Famer, Linda Toscano.

“Every trainer has their own style of training, rigging, and ideas. Ultimately I’ve learned that you have to treat each horse as an individual. What works for one may not work for another. I’ve been with Linda for almost 15 years now and we have developed a great rapport.”

In larger stables, a trainer cannot be hands-on with every horse each day, so they rely on the caretaker to tell them if anything pops up, like a hoof problem or undetected illness. The caretakers are the eyes and ears.

“Being in a big barn we have a fast-paced environment, especially from March through October when we get serious training, racing and are on the road.”

Caretakers are the unsung heroes of the business. These people sleep, eat and breathe the horses and in most cases these horses are their only family, so it is no surprise they get attached to these animals and are heartbroken when for one reason or another they are taken away. When you work with a horse 24/7 it is impossible not to get attached to that horse.

“Anyone who knows me says I fall in love with every horse I have. But my greatest love was Market Share. Markie was special in every aspect. Not only was he a world champion, but he was also my therapist. He dried so many of my tears and gave me some of the greatest memories that will last a lifetime. A big piece of that horse will always be in my heart and belong to that horse,” she said of the 2012 Hambletonian winner.

The caretaker is definitely one, if not the most important person, in how the horse performs on and off the track. The driver and trainer usually get the recognition and glory, but in reality the caretaker is the backbone that holds it all together.

Hats off to Greico and all the caretakers in the business. Harness racing and the great four-legged athletes wouldn’t be anything without your dedication, hard work and love.