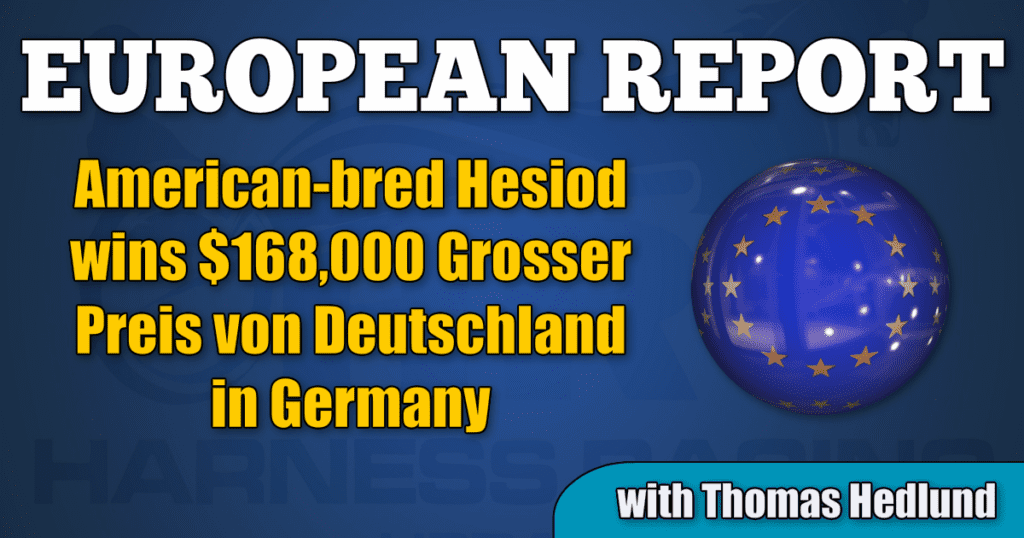 Wire to wire for Hesiod in Germany

Grosser Preis von Deutschland is a race for the 4-year-olds and over 1.3 miles, Hesiod, bred by Windsun Farm Inc., found the lead at an early stage and driver Ulf Ohlsson had control of the field of 12 opponents the whole way. Behind the winner, Enterprise took the silver medal while Classic Connection finished strongly for third place.

The mile rate of 1:56 is a strong note at the racetrack in Hamburg and trainer Petri Salmela was, as usual, beyond happy after the prestigious victory.

“Hesiod hadn’t showed the right spirit in the last races, but I aimed for this objective for two months and I know how good he is,” said Salmela, who traveled a long way to reach this milestone. He trains most of his horses in Boden, the very north of Sweden and won the Jubileumspokalen at Solvalla with Makethemark in August.

Hesiod won six out of eight starts as a 3-year-old, followed by a season with four wins in seven attempts last year but hadn’t won any bigger races as a 4-year-old until last Sunday’s race in Germany.

“Now he’ll go back to Boden and we will train him during the winter,” Salmela said.
Ten in a row for Aubrion du Gers

The 8-year-old gelding is without doubt one of the best trotters in Europe, but trainer and driver Jean-Michel Bazire has rejected several big races outside his home country, with a few exceptions.

In Bordeaux, Aubrion du Gers was served a second over trip by his trainer and the attack for the lead started at the backstretch. The Memphis du Rib gelding had everything in his hands during the last 300 meters of the race and he came home in mile rate 1:57 over 1.6 miles.

Aubrion du Gers can be proud of his 10-win streak, which started in April in the $103,000 Grand National du Trot:

As a gelding, Aubrion du Gers cannot race in the big Grand Prix races in Paris during the winter.