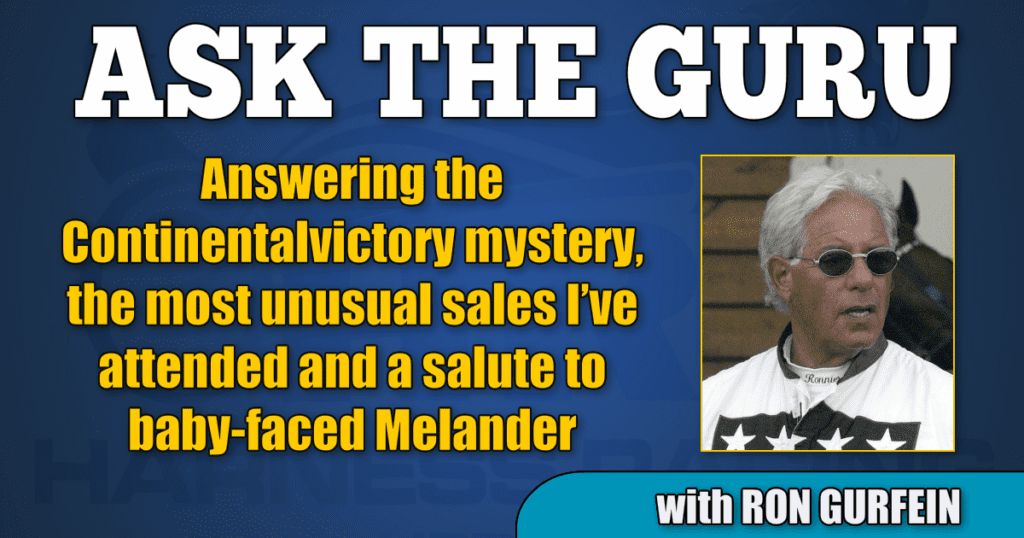 Answering the Continentalvictory mystery, the most unusual sales I’ve attended and a salute to baby-faced Melander

All in this week’s edition of harness racing’s favorite advice column.

Tidbits: OMG The baby-faced kid has done it again. That kid, Marcus Melander, looks like a 10th grader is crushing the elders. You are well aware of Campbell and Sylvester, Lachance and Gurfein, Gingras and Takter, well my friends there’s a new pair on the block, welcome Sears and Melander and for $1 million no less. Uncle Stefan (of Hambletonian fame and also a premier photographer) had the good sense to ship nephew Marcus a relatively non-descript Cruzado Dela Noche to the U.S. for the Yonkers International. Two qualifiers and — boom — a horse with $50,000 in 2018 earnings gets to multiply by 10 with a $500,000 check at odds of 30-1. Amazing, but definitely not shocking. Marcus achieved similar results in the $500,000 Maple Leaf Trot at Woodbine Mohawk at similar odds with Jody “Hollywood” Jameison in the bike a few weeks prior. We have all heard of “Baby Driver” now we have Baby Trainer. From the first Saturday 2-year-old races at the Meadowlands in 2018 to the win at Yonkers this extraordinarily capable young man has been a shining light on the Grand Circuit. He seems to possess a quiet confidence way beyond his years.

Thanks to the wonderful Mickey Burke, Sr. for treating me to lunch at the Red Mile and congratulations to son Ronnie for buying my favorite yearling in the sale. The Father Patrick out of Jolene Jolene is, by far, the most talented filly I have seen in a paddock since Miss Wisconsin years ago. It is interesting to note that both were sold by Hunterton Farm and neither one was on my list, but the lovely miss Cindy encouraged me to look at both. I have won the Merrie Annabelle with some great bred fillies and some that I would consider B pedigrees, which to me proves that talent especially at two can overcome. Three examples were: Miss Wisconsin, Vernon Blue Chip and Muscovite who won at 42-1 when Snow White ran in the stretch at 10 cents on the dollar. Ronnie’s new acquisition purchased for $200,000 fits right in with this group. I hope she repeats what they achieved years ago.

Daryl Glazer asks: I have a nice 3-year-old trotting filly that wears a half-inch, half-round in front and a steel full swedge with borium behind. She hits the wheel discs in the bike and when I use a big bike and tie her out she knocks my feet out of the stirrups. Can you suggest a way to shoe her to prevent this problem?

I doubt shoeing will help, but I promise there is a bike somewhere that will fit her. I had the same problem with a pacing colt that was nearly 17 hands, by far the biggest standardbred I have ever seen. I bought him as a yearling and he was huge then and just kept growing. I had to rent a special 56-inch bike. I am sure that will solve your problem. However, I will try to give you a true Guru fix. Cut her hind toes to the blood and put a queens plate on her with her feet lower to the inside. It’s a reach but the only reach I have for that particular problem in my arsenal.

Phillip Miller asks: It’s sale time and I was wondering in all the years you bought and sold horses were there any sales that were out of the ordinary?

A few definitely come to mind. The first was a one-and-done venue in the late 1960s. I remember because it was in the dead of winter and Art Koch and I were going to drive, but the roads were horrid so we decided to take a train. We all met at Penn Station and 4 hours latter we were at Fasig Tipton sales pavilion In Timonium, MD. Bet you never knew there was a Standardbred Sale there.

Art and Marty who’s last name will remain anonymous to protect his family from the pain, played Gin Rummy for the entire train ride and I am sure Art won enough money to buy a nice colt. I on the other hand bought a not so nice Airliner colt by the name of Free Air, his nice name was all the good I could say about him.

The next sale of unusual interest was the Phil Tully’s Woodstock Stud and Pine Hollow Stud sponsored yearling Sale at the old Madison Square Garden. The location was unusual for that year, but was a popular place to sell horses in the early 1900’s. The catalogue was an 8/10 spiral binder with fine glossy pages. There weren’t more than 75 horses, but it drew a large and curious crowd. The star sires were first-crop sire Romeo Hanover and Speedy Rodney. The sale topper was a Romeo colt for $33,000 purchased by Stanley Dancer and later named Nevele Arrival, who according to Bob Boni was a “cute chestnut colt.” That was the highest price ever paid for a New York bred at that time. I bought a Torpid filly that I would have been better off without.

The last and craziest of these oddball sales was Lana Lobell at the farm in Bedminster, NJ. It was held outdoors with champagne and hors d’oeuvres and bid spotters in tuxedos. It was a true Alan J Leavitt production. Alcohol and a horse sale, what more could a consigner ask for. I came away with a tiny Speedy Crown colt first foal of Gene Riegle’s good trotting filly Cammie Almahurst for the bargain price of $100,000. As Sonny Patterson used to say, I should have traded him for a dog that day. At least I would have had a nice pet. I also purchased Higher Power a small bay colt by Nero out of Tarbel Hanover for $50,000 for Peter Rhulen, and Jack and Pearl Katz. That colt became my first major stake winner upsetting a stellar field in the Adios in 1982. Driven to perfection by Mickey McNichol he beat the likes of No Nukes and Merger and received his garland of Orchids in the process.

Melissa Keith asks: This is about Continentalvictory’s retirement from racing. I seem to recall that she was scratched from the Kentucky Futurity because of a leg injury on race day. I recently read an article that blamed the scratch on her being in heat on the day of the big race was it either or both.

First, I am glad to hear a lady’s voice in my column. Somehow I am inundated with horsemen. The question is interesting as I have heard 20 versions myself and will end the speculation here and now. First of all, nothing happened on race day. I have trained horses for almost six decades and would never scratch a horse because of a heat cycle problem. Continentalvictory was scratched from the Futurity because of a torn suspensory in her right hind leg that in essence ended her racing career. I blame myself for the injury because I had trained her on a very poor muddy track at the beginning of the week and subsequently we noticed the filled suspensory ligament. The ensuing examination showed a significant tear that after various treatment and six months rest proved irreversible and she was retired. I may be a Guru, but far from a genius and I can’t speculate that being parked to the half in :53 in the World Trotting Derby a few weeks previous to the injury at the Red Mile had anything to do with her eventual demise. It was a wonderful ride and very sad it had to end the way it did.

Thanks to all my readers again for the wonderful support. You are in for a fabulous weekend of racing at Pocono with so many Crown eliminations. Have a great week.