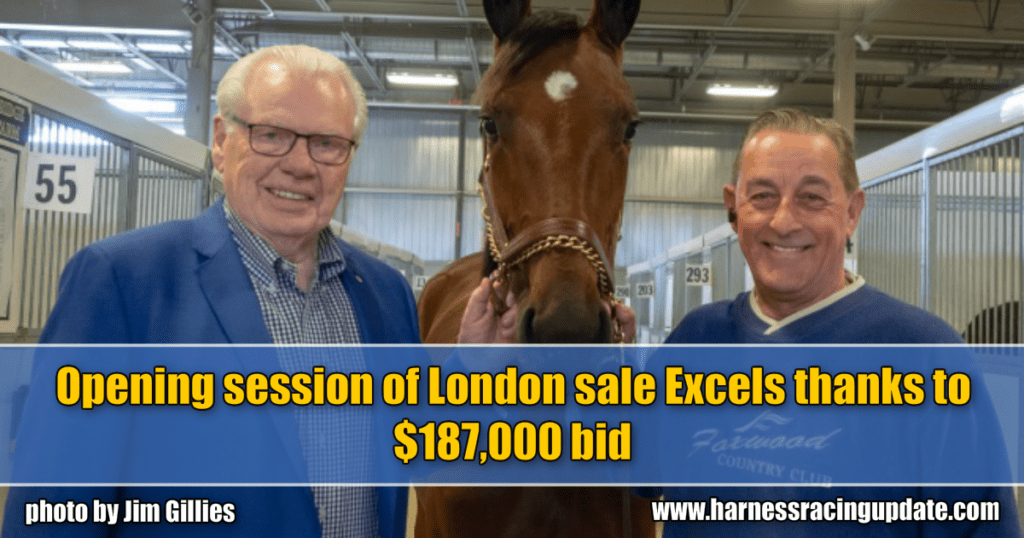 Opening session of London sale Excels thanks to $187,000 bid

Stonebridge Excel tops Day 1 of the London Selected Yearling Sale with a bid of $187,000 by Bill Donovan from a session that was up 31.7 per cent in average and 15.5 per cent in gross from a year ago.

It took just a few minutes in the auction ring for Stonebridge Excel to soar to a bid of $187,000 Saturday afternoon at the London Selected Yearling Sale, but for Dr. Cal Stiller it was the culmination of many years to produce that individual and a quarter century in the business to get to the point of having the sale topper for the opening session of Canada’s premier standardbred sale.

“To breed and hope that there’s a filly that you want to keep or a colt that is flawless, it doesn’t come all at once. You got through a number before you reach that ideal individual,” said Stiller, who operates Stonebridge Farm of Arva, ON with his wife, Angie.

“Unfortunately, Angie isn’t here today, but the excitement really goes back to our shared excitement. You have a broodmare and you choose a sire and you watch that individual grow. It is exciting. It’s been exciting for 25 years for us,” Stiller said.

William Donovan of Florida purchased Stonebridge Excel, a daughter of Muscle Mass out of Armbro Vanquish, and word is she will be trained by Rick Zeron, the conditioner behind Hambletonian-winning filly Atlanta.

“I think she’s everything. She just checked all the boxes off,” Stiller said. “She really has a flawless conformation, very athletic. She had a great video. She couldn’t be by a better Canadian sire than Muscle Mass and she has great depth – that mare just continues to put out extraordinary individuals.

“The residual value of her as a broodmare is pretty considerable and I have to say that it’s with some sorrow that I don’t see her come back to our own broodmare band, but that’s the way it is.”

Stonebridge Excel — who has a number of talented older siblings, including Manofmanymissions, a winner of more than $1.2 million — was the highlight of a strong opening session of the sale held at the Metroland Media Agri-Plex facility at the Western Fair District in London, ON.

The second and final session of the London sale begins today at noon. Some 230 yearlings are scheduled to be sold, including a handful at the end that were originally slated to sell in the London Selected Mixed Sale that was cancelled due to lack of entries.

“I’d be thrilled if we continue with an average of $28,700 for Sunday. I don’t think we will, just because we have some extra horses added at the end, but, boy, it was a great start. Great start,” said sale manager Ann Straatman, who is also the reproduction manager for Seelster Farms of Lucan, ON. Seelster was the leading consignor by gross on day one with total sales of $796,000 for 19 yearlings sold, including the top-priced pacer, He’s Watching—Shadow Of Mymind colt Shelton Seelster that brought $130,000 from trainer Dave Menary, the man that campaigned He’s Watching.

“I was interested in the He’s Watchings and I thought he was as good as any colt in the sale and definitely the best He’s Watching,” Menary said. “The colt made a good impression on me at the farm. I liked him in the paddock at the farm and he had a good video. I was happy with the way he vetted out, so I have no complaints. I’d like to bring him home for less, but very happy coming home with him and hopefully I’m happy this time next year… It’s not who wins at the sale, it’s who wins at the track.

“I thought he really shined in this sale, as an individual and pedigree-wise. So, we went a little over our budget, maybe 10 per cent over our budget. We said ‘last time’ about four times. I didn’t get in until about $60,000 and the bidding went quick, but it was going slow at the end. I thought the underbidder was ready to surrender. We’ll cry over the initial number, not the little extra if things don’t work out.”

“I put all my eggs in that basket today. I took a pretty good run at the Bettors Delight filly right after him, but near the end I started to do the math,” he said.

Seelster Farms’ assistant farm manager Walter Parkinson said Shelton Seelster was a “nice individual” from the start, “sort of this big, strapping, good-looking colt all along and just came along nicely this yearling season. He was the colt that most people wanted to see… It was a busy year for people coming to the farm and he was definitely on everyone’s pacing lists.”

Though Seelster led all consignors in gross sales, Stonebridge led in average with $73,200 for five sold. It was the second year of having one major Canadian sale that combined the old Forest City Yearling Sale and Standardbred Canada’s Canadian Yearling Sale.

“I think this is a good platform, in terms of having a single platform for Canada, so that’s really a benefit,” Stiller said. “It’s a nice facility, people come, and there’s a good feeling in the crowd. There’s a lot of serious lookers. I had three people come today to the consignment who have never owned a standardbred before and two of them bought. To me, that’s a positive thing.”

Donovan was the opening session’s second leading buyer with his lone purchase of Stonebridge Excel, but Millar Farms topped everyone with a total spend of $192,000 on two yearlings — Bettors Delight—Farouche Hanover colt Bettorbuckleup from Twinbrook Limited, agent, for $85,000 and Bettors Delight—Shakai Hanover filly Shiraz Seelster from Seelster Farms for $107,000.

Straatman said the sale was designed to be as equal as possible in talent on both days, but she’s hoping combining the sale with Saturday night’s Ontario Sires Stakes (OSS) Super Finals at Woodbine Mohawk Park may generate some cash flow for buyers to use in today’ session.

“Keep it up, everyone. Come back (Sunday) with your winnings from (Mohawk) and let’s keep the ball rolling,” she said. “There’s still lots more to come.”